Yesterday I took Oliver and Dillon in to be wethered. Oliver, as I mentioned before, is going to a home where he will be a fiber pet. The boys, at 7 1/2 weeks, are just too big to band (in my opinion). So I drove them into town to see Dr. Sullivan, baaaing in the back of the truck all the way there (the lambs, not me)....they were strangely silent on the way home though.

Since Oliver (below) was purchased as a fiber pet, I had no qualms about having him castrated. 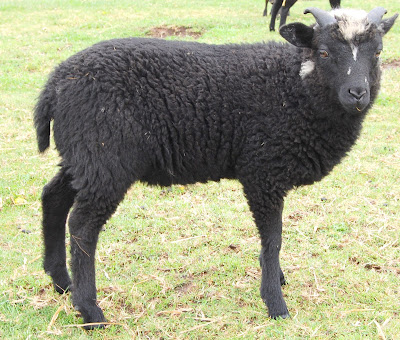 I had a lot of hesitation about having Dillon "done" though. Dillon has wonderful square conformation, gorgeous fleece ( like his brother and his dam), and his dam's perfect little fluke tail. But as he has grown, It looks like he is a half poll and will have small scurs. His dam, Willow, carries some polled genetics. She had a beautiful polled ram lamb last year that I had a hard time placing and ended up selling as a fiber pet.
The problem is that it is hard to sell a solid black ram, no matter how nice he is. There are not enough Shetland breeders in my area breeding for polled genetics....heck, there are not enough Shetland breeders in my area period! So, Dillon loses his manhood to hopefully become someone's new fiber friend. 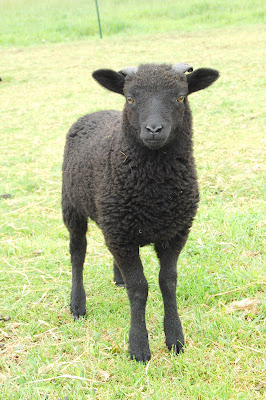 For those of you who wonder what we Shetland people are talking about when we say "fluke tail", here is a pretty darn good example of one. This is Willow.....errrr...Willow's hind end.

The tail is wider at the top with a wool covering and tapers down to a hair covered tip. This is an important characteristic of the Shetland breed. 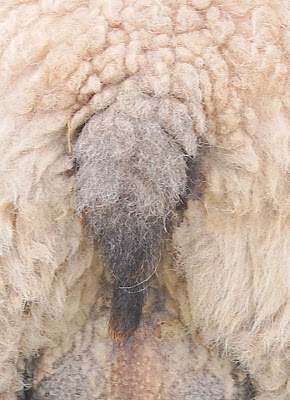 The only intact ram lamb that I have left to sell in Duncan. He has really nice conformation, fleece and tail. His horns look like they are going to be wide set at this point. He carries spotting genetics....and obviously moorit. 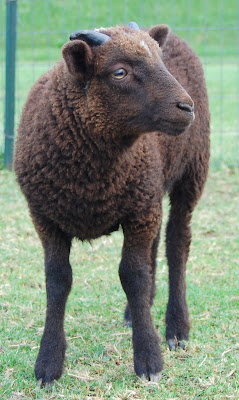 I guess that I have been neglectful by not showing pictures of my newest chicks. Actually, I think I got them around the beginning of June, but I have been distracted by too many other things going on...monsoon like weather...flooding basement..whatever. So, here are some not so recent photos... just to introduce you. 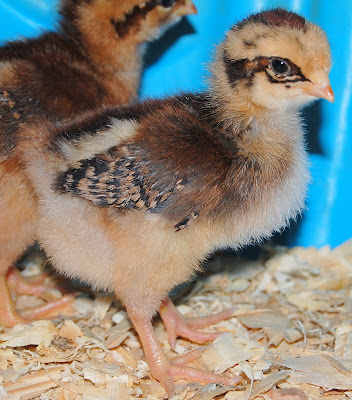 This is one of my Barnevelder chicks. All of the breeds in this last batch ( last batch for this year)will lay the dark chocolate colored eggs. Here is my criteria for picking chickens;

1) They have to be pretty, or at the very least unusual....weird is good too, I just don't want anything that would be considered normal (notice I have exactly zero white sheep).

3) Chickens must be friendly. What's that you say? Chickens aren't friendly? Clearly you have never been to my farm, or in my chicken coop where they all fly up to land on your head.
No it's not anything like that Alfred Hitchcock movie! 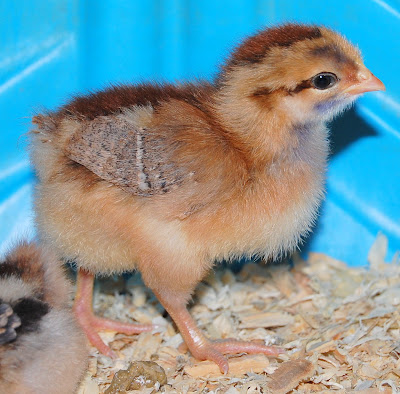 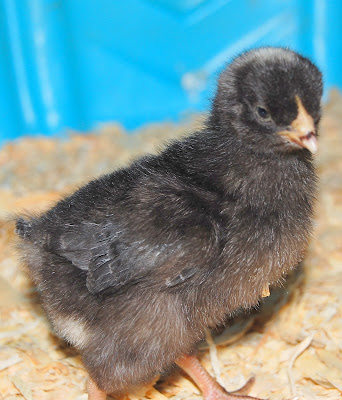 I never did get a chance to post about all of the cats, but tonight Justin is picking up the Iowa City cats and taking them home (yeah), so we will be down to the usual 4 cats......hmmm..that always looks so much worse when I see it in print. Who has 4 cats in their house?

Who has four cats?? Uhh.... your neighbor up the road. Down from 5. The fifth one got kicked out when it tried to sleep with Walter.

The question really is "Who has a duck in their laundry room?"

Boy -- does that look bad in print!

Corinne,
I think my solid black ram, now wether, had very similar looking horns until he broke one off. His mom has deep depressions so I suspect her as a poll carrier. Look at pictures of Blackberry on my blog and tell me what you think. They started out wide enough, but then began to grow sideways and got a weird little curl on them.

LOL! Cathy, there are probably worse things that you could have in your laundry room than Walter the Duck!
Hi Kara,
Blackberry sure looks scurred to me. Have you checked with Juliann Budde for her opinion? I had a lot of scurred ram lambs last year, but Juliann is the real expert on them.

After reading this I am so happy you aren't my caregiver.

I have a very tame chicken as well. Her name is Madonna and she comes running ~ just as fast as her little legs will carry her ~ up to me when ever she sees me. When I first got her her feet were in horrible shape and she could barely walk. She couldn't fly. So I'd pick her up and put her on the roost so that she had access to food & water and a safe place to sit. Now I pick her up and pet her and give her animal crackers and put her on the roost. She can fly but still like me to put her up there.

I don't know who anonymous is but if I ever need a caretaker, I hope she's as kind and caring as you!

Oh Nancy, you never run out of uses for animal crackers do you? LOL!
I am pretty sure that Anonymous was refering to the castration story and not my general caregiving skills.......Tom?? But thanks Nancy.

I am sorry if any body thought I was serious. I know what a kind and giving person you are. ....
I just like my man parts where they are.
TP

I've never heard of those breeds of chickens -- or chocolate-colored eggs! I'm afraid to click on the links for fear of feeding a new wish list. :-) I do wish we had more variety in our group of four chickens, but we don't need more than four. And personally, I really like having one white sheep. I WOULD like one black one as well....

Well Michelle, if you lived closer I might have GIVEN you a nice black sheep with polled genetics :).