Well, I was planning to put the sheep into their breeding groups this coming weekend...at least that was my plan. Evidently the girls had their own agenda, and my plans were decidedly of no consequence to them.

The girls' evil plotting began last week when I decided to move the smaller rent-a-ram into a pen inside of their barn. I needed to move him because, with breeding season approaching, he was getting pushed around quite a bit by the larger ram. Since I wasn't quite ready to put breeding groups together, the pen in the ewes' barn was the only available spot that would allow him to have other sheep around for company while maintaining a 'safe' distance from the ewe flock. There were two fences between him and the lusty ladies and, after all, this was only going to be for a few days until I was ready to put the breeding groups together. I watched him closely for the first day and he made no attempt to escape and seemed pretty content to see, and smell the girls from a distance so I felt pretty confident that he would be fine in there until he was allowed his conjugal visits. Don't get me wrong, HE behaved like a perfect gentleman....my girls on the other hand.......

The girls could see and smell him as well, and apparently they liked what they saw. Daisy walked endlessly from the front gate - peering in at her intended, baaaing a plaintive baa the whole time- to the back gate to see if there was another way to get to her man. 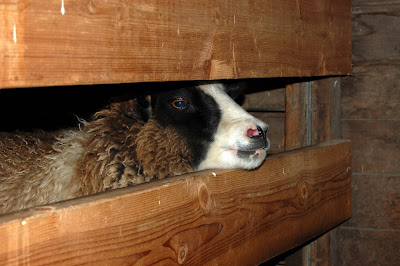 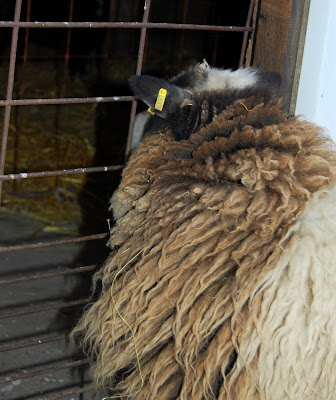 Clearly she was cycling (and not in a Lance Armstrong sort of way). After several hours of listening to her incessant protesting, I could take it no more....into the pen with the boy she went! OK, so there will be a couple of lambs born a few days earlier than I had planned. Daisy and Gilroy spent a lovely evening together and all was quiet again...at least until the next day when Lovey decided to follow Daisy's lead and started the whole pacing/baaing/lustful gazing thing all over again. 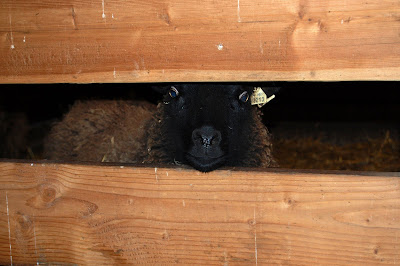 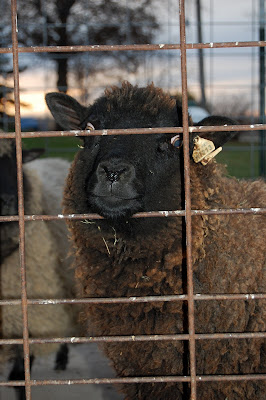 That was it! Breeding groups were going together immediately!
Whenever I have to move sheep around I am always reminded of the shameful fact that I have never been very good about halter training my sheep, so when I placed the halter on them I literally had to alternate between trying to pull sheep that had flopped on their sides like carcasses and hold onto sheep that were hopping like popcorn on the end of the lead....It's no wonder that people drive slowly past my house and stare.
After I (so gracefully) got the girls to their intended destinations, I put the ram in with the majority of the girls, and moved one of my ewe lambs that I was not planning on breeding into the empty pen inside the barn. She is a bit smaller than the other girls so I was planning on keeping her in the pen to protect her virtue until breeding was over....that was MY plan, but as I mentioned, sometimes my girls have their own ideas.
Soooo, I am having lunch this afternoon and I look out the window and notice that there seems to be an extra little sheepie in the pasture.....OH CRAP! I am not sure how, but she jumped both fences around the pen and was now cavorting about with the other sheep...and the ram. Fortunately, I don't think she was out there long and he was showing no interest in her as of yet......not that I saw anyway....yeah, right. When did I lose control???
Posted by Crosswinds Farm at 11/12/2009 09:00:00 PM

lol...those floozies! :)
hope we get an early/warm spring next year!

I like the "popping corn on a string" idea. Thanks for the chuckle this morning. It all sounds so familiar-- especially the ewe lamb performing great leaps!

Trollops!!!! In our neighborhood! Oh the shame!!!

Too funny, Girlfriend!! Make me laugh!!!

The flopped sheep carcass and popcorn on a string sounds all too familiar! It also occurs in goats! LOL - Love it!

It's official...we need to start driving past the farm more often just to watch the craziness. I'm not sure how much, but I'd pay something to see you holding onto the harness with sheepie popcorn at the other end...lol!

I know all about the flopping sheep. They are like that before I get them halter trained. My goat the other day although trained to halter was so hyper he was bouncing up to shoulder height and then running and pulling me to run faster mom, faster! It's breeding season here too.

Great story, Corinne. Great visuals. Those hussies-- I have a few just like them, here!

Wait a second here...."when did you lose control?" You say that as if you think that, at some point, you were actually in control! I think you need to have a word with the sheep about that one! LOL! Ferdie is addicted to chest rubs. He has an extremely cute habit of wagging his tail very energetically when you get just the right spot. It's so funny. I just love him!