Garden woes and a garden hoe

Yesterday morning I was bound and determined to tackle my badly neglected, over-grown, weed pit, sorry-excuse-for-a-garden in hopes that I could find some viable plants amongst the Little Shop of Horrors.
Earlier this spring, it was almost a respectable garden, but in recent days the weeds have taken over and weeding has become such a daunting task that I have been avoiding it like the plague.
The problems began with a rough start to the growing season here in the Midwest. We had near record rainfall in June and parts of my garden were literally under water for nearly three weeks. Unless one is growing rice, these are less than ideal growing conditions. 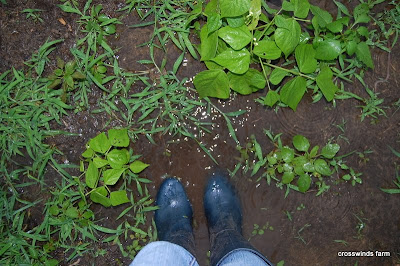 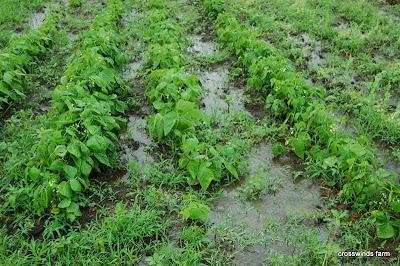 When the rain finally subsided, any meaningful gardening became nearly impossible with all the boot-sucking-mud pulling at my feet and the evil weeds laughing at my useless attempts to rid them from existence....OK, maybe the laughing weeds were my imagination...but still..it was a huge mess. In addition to the weed issues, I had to replace several of my 50+ pepper plants and a couple of rows of green beans that rotted in the mud.
Things eventually started to dry out, but that's when the opportunistic weeds really made their move. The 80 x 30 foot garden was almost becoming indistinguishable from the lawn. Weeds and grasses were intermingled with the few scrawny vegetable plants that were holding on for dear life. I just couldn't keep up. 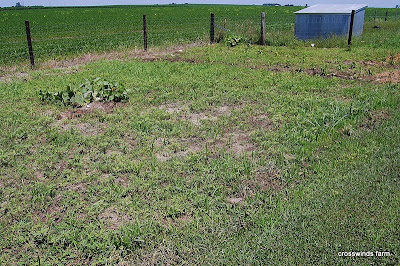 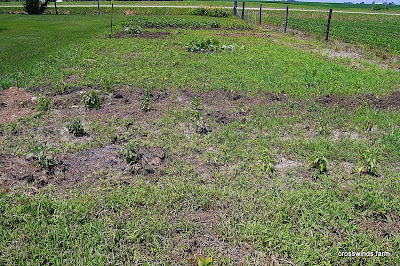 At that point in time I was hoping to enlist the help of Manny. Manny is strong and handsome, he works tirelessly without complaint.  He has always done everything asked of him without question. Miss Effie and I came to share Manny when one of Miss Eff's flower customers offered him to us for a very small fee....how could we refuse. He spends some of his time at Miss Effie's and the rest of his time here. We don't mind sharing him.
This is Manny, our Mantis tiller......what did you think I was talking about? 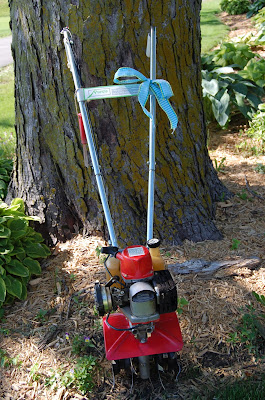 But even Manny was no match for these weeds. So I slowly started picking away, weeding by hand, section by section, trying to make some headway through the garden. Now, all of my life I have been accused (deservedly so) of always doing things the hard way, and I pondered that fact several times as I was out pulling weeds one stem at a time out of the tangled vegetation.
And then, in a moment of clarity that can only be achieved while bending over a buggy, weed-infested garden in 90 degree heat with sweat pouring into your burning, stinging eyes, it came to me....
.............I have one of these. 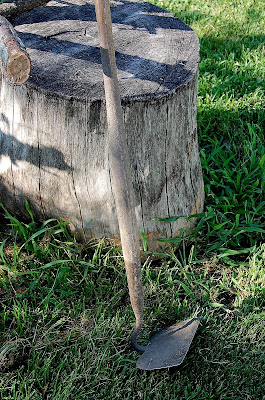 A Hoe? Could this possibly work? Hmmmm, people have used them for centuries......this is a crazy enough idea that it might just do the trick!
So, with a renewed hope for resurrecting of my garden, I began hacking away at my weedy rivals. Gleefully I hacked,  I tossed them into piles and finally, after about 4 hours and a lot of sore muscles later, it happened. I could see actual vegetable plants, and some were even  producing in spite of my neglectful ways. 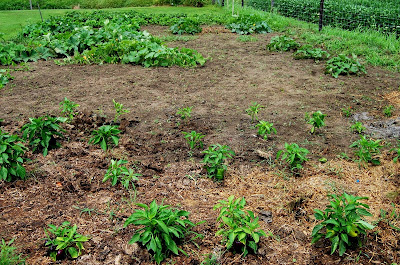 My purple peppers are looking better than they have in years. 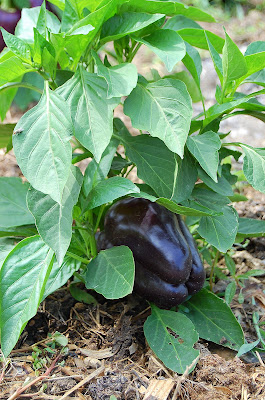 Lots of baby watermelons were lurking under the weeds. 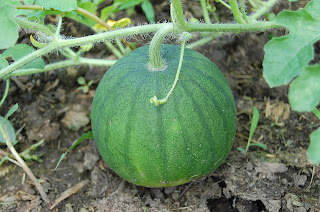 And lots of these yellow Summer Squash....which I loathe....but, that's OK, whatever. I intended on planting acorn squash, but someone wickedly switched the tags at the nursery so I came home with these.....but look at 'em go! 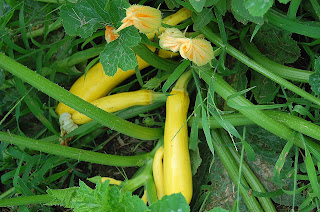 Victory is mine! Ummmm, at least momentarily. I took these pictures to prove that once this season, even if it was for a fleeting moment, I had a nearly weed-free garden. There is a strong probability that next week it will have reverted back to it's previous wild state, but for now I am basking the glory of my small victory.
Posted by Crosswinds Farm at 7/27/2010 07:37:00 PM

I just laughed as I read this because I am totally in agreement on our gardening season this year. It has certainly been a challenge, but it looks like things are doing well.

Being a great lover of garden art, I enjoyed going through your blog. keep on posting.

As always, a entertaining account of life in the country. Your posts always leave me with a smile on my face and a determination to post something witty and charming on my blog.
I love the introduction to "Manny" and the last minute discovery of your hoe! What a wonderful story.
Kudos once again Corinne.

thanks for sharing your "ugly" pictures :)
glad to know even the professionals have things get out of hand from time to time

a hoe....huh, never crossed my mind..guess that's what those things are for after all :)

Photo of the day - Is that a new chicken? Are we doing chicken math again :-)

I enjoyed reading your story of the soggy garden that could. We recently moved up a notch from our trusty rusty old garden hoes and got us this wheel hoe instead to use in our garden. It makes the cultivating simple and quiet. It's easier to push it than to fight a tiller.