Now that's a sheep of a different color!

First, you should know that my sheep are still alive after the 'tree-eating incident', we have reconciled and I haven't sent them off to market....yet!
We finally got some rain here last week. The temperatures are still above normal, but they are somewhat less oppressive than they have been. I guess 90 (ish) degrees feels more tolerable after you have been living with 100 (ish) degrees for a while. Even the animals seem much more comfortable and the pastures look as though they will turn green once again. 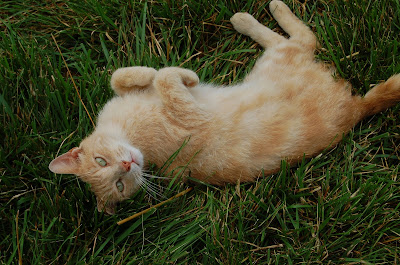 I have been evaluating ram lambs, as well as taking a closer look at the ewe lambs that I am keeping. I need  to make some decisions about which ones I will take to the Wisconsin Sheep and Wool Festival to show, and which of the ram lambs I need to sell. I have found a few surprises in my little lambies...good surprises, mostly.
I have a lot of sheep in my flock that carry modified color genetics, so I expect some surprises in color variation from time to time, but this year I have some crazy colors going on. The sire to most of these lambs was Firth of Fifth Avyt, who has a lot of modified genetics in his pedigree as well.

Remember these guys? Apollo and Thor. 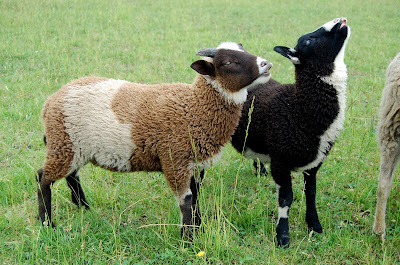 I noticed some fleece changes in these boys when I was evaluating Thor ( black flecket) to send him to his new home at OK Acres last month. I don't have any 'grown-up' pictures of Thor, but I did take some fleece pics before he left.

When I parted the white spots on his fleece, I was surprised to find streaks of modified black underneath. Very strange. 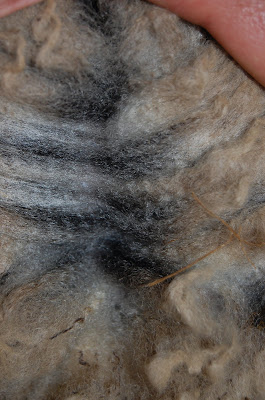 I then checked his twin, Apollo, to see what was lurking under his white spots and found similar changes, although in moorit tones. 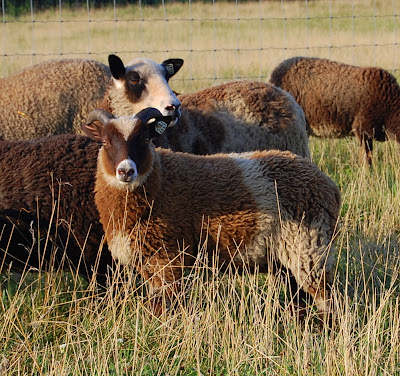 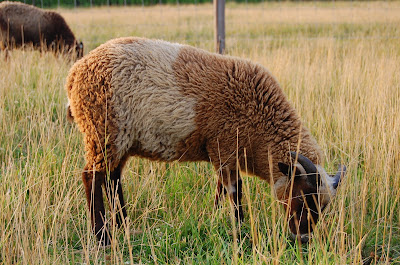 Under the moorit spots ( moorit = brown for my non-sheepie readers), I found light mioget...that's not unusual, but....... 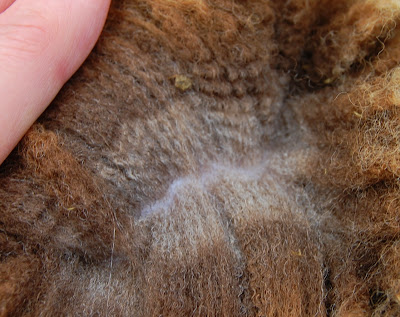 ........under the white spots are variations of modified moorit. 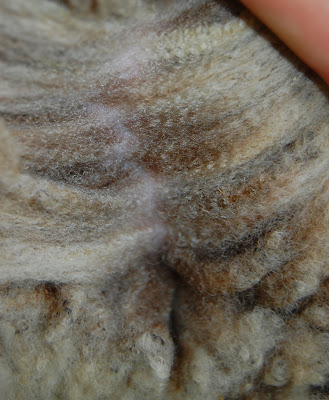 This is what a sample of the white spots look like. White tips with shades of modified moorit in the middle and then back to white at the skin...it's like fleece Candy Corn...only non-edible....weird! 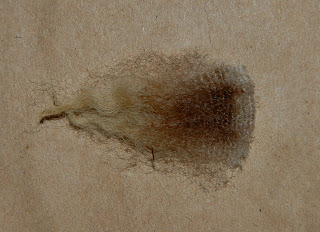 Now I was curious as to what some of the other lambs' fleeces were looking like.
Remember this guy? This is Pegasus, he was born with very straight fleece that looked like dog hair. 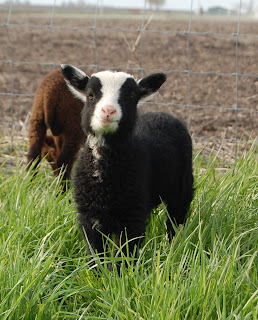 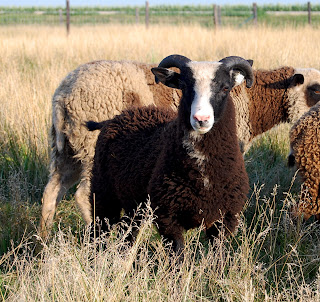 This is a sample of his fleece. 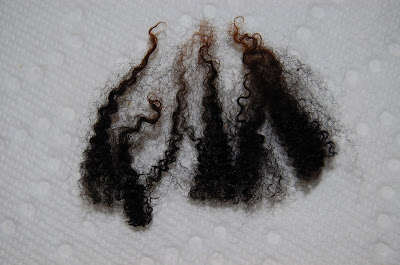 AND...it's a little hard to see in this picture, but he is modified as well, he will be Shaela. He only has a very small white spot on his chest, so I can't tell if he has the same color changes as the other lambs under the white. But his black is definitely changing. 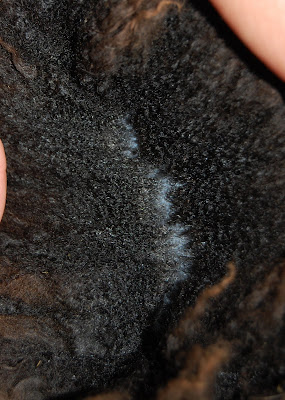 Even his ears are kind of funky! 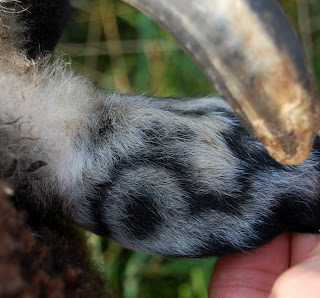 This is Athena, she was the last lamb born this year, so she is quite a bit smaller than some of the others. 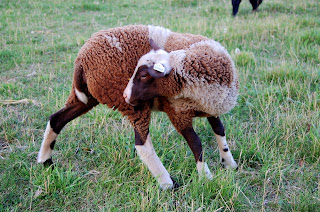 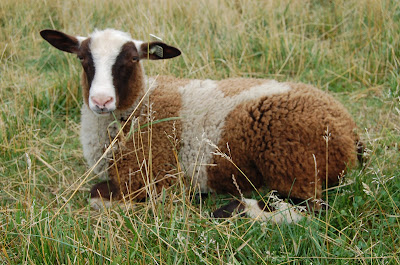 So far there isn't much change under her moorit spots, but as I mentioned, she is younger by almost a month, and her fleece hasn't grown as much as the others yet. 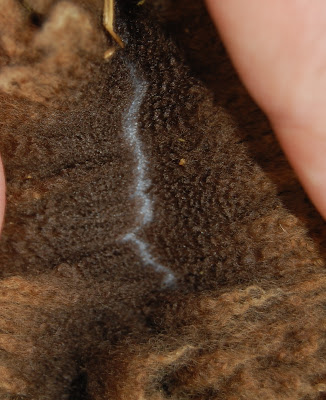 But, there is a lot going on under her white spots! 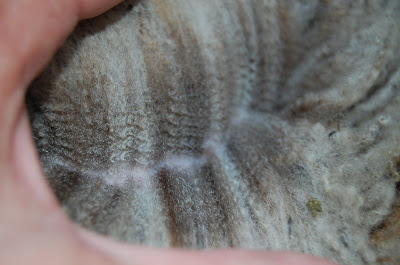 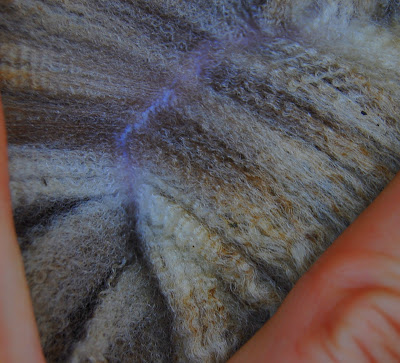 I am certain that her fleece will change at the skin like the boys have, but it will be fun to see what it does. 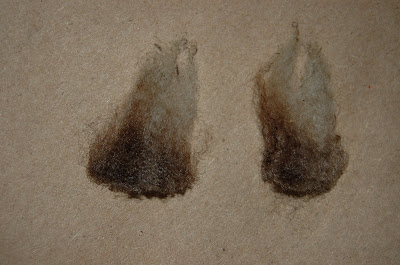 So far those are the lambs with obvious changes, and those are all 'keepers'.
I have been watching this guy ( Helios) and he hasn't changed much. He looks slightly lighter at the skin, but there is not enough change in him yet to definitively say that he is modified. He is also out of Avyt. Helios is on my 'For Sale' page on this blog. 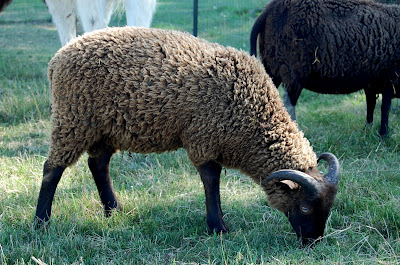 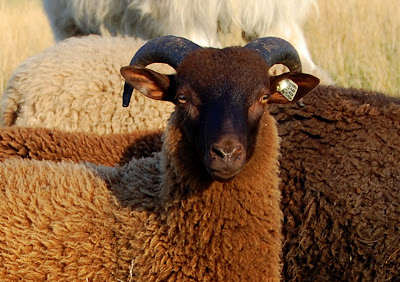 OK, so all you color genetics fanatics, what's the deal with the on again, off again color situation??
Side note; there are no ag genes at work here.
Discuss amongst yourselves...but hurry, I have to figure out what to register these babies as.
I will check some of the other lambs this week.
Discuss.
Posted by Crosswinds Farm at 8/01/2011 07:10:00 PM

That is WILD; I don't think I've heard of sheep changing color in their WHITE areas before!

That ear looks like some of the tattoos the teenagers around here are wearing now days. lol

Non-sheepy person here but would love to felt some of that wool!!!!

That is the weirdest thing I've ever seen!!! I've got a number of modified spotties and HSTs here and don't remember ever seeing change in the white areas. Any chance there's katmoget in there somewhere? That's the only thing that I can think of that makes white (or light) darker at the roots...

Leave it to you, Corinne!

By the way ~ BEAUTIFUL sheep!!!

I know NOTHING about fleece/wool but I do know that Pegasus is one good looking fella!

Weird! Wonder if those lambs will be variegated instead of spotted after shearing? And what will their lambs look like? I have a lamb this year that is "spotted". She is black with two dark brown spots. The color change goes all the way down to the skin on her.

Wow! Beautiful colors...what a joy it would be to blend all those together and spin....Love the patterned ears!!!

Exactly, Nancy, leave it to me to have some weirdo sheep!

I know you said no Ag, but I've had Ag sheep born wildly spotted, then turn grey (or musket) as they grow - similar to what you're seeing. The white areas go dark; the dark areas go lighter. At shearing, you can still see the light/dark differences.

Fabulous fleeces, btw, SO jealous! Can't wait to get some Crossroads blood in my flock one of these years ;-) I knew I had seen that before, and Franna mentioned it with the spotted AG, but I'm pretty sure I have seen it in spotted modified before too. It's definitely an oddity, but super cool. And his ears are AWESOME! Will be interesting to see what they look like when he's an adult :)