I always like to keep a handful of roosters around the farm.
Their only job is to wander around the property, eating bugs and making happy rooster noises.

We have pretty roosters...err...I should say handsome roosters. 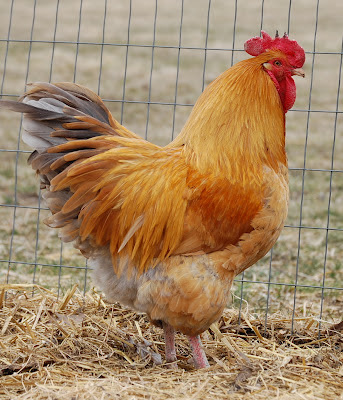 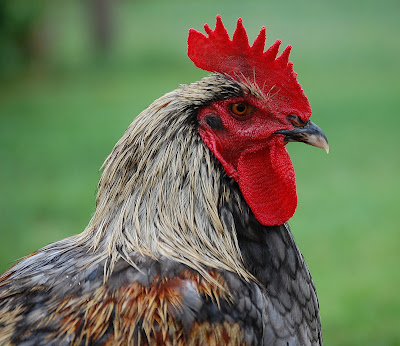 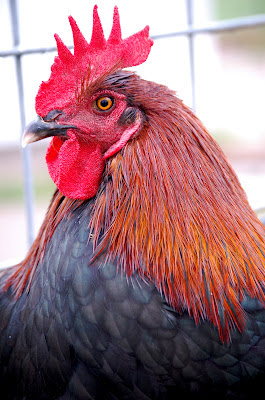 ....aaaaaand we have Konrad. 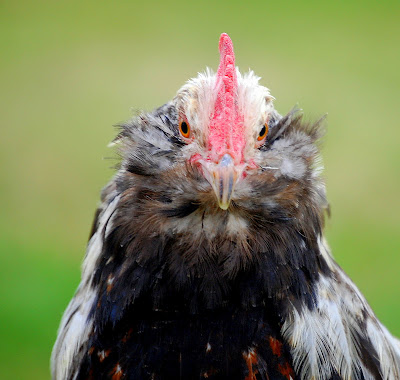 Konrad is young, so he isn't quite as...fancy, as some of the other boys.
Not yet anyway. 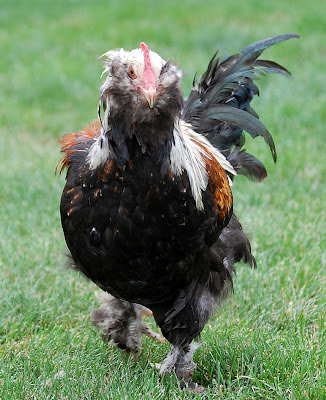 His feet are downright creepy.
He is a Salmon Faverolle, so he has a fifth toe, which is characteristic of the breed.. 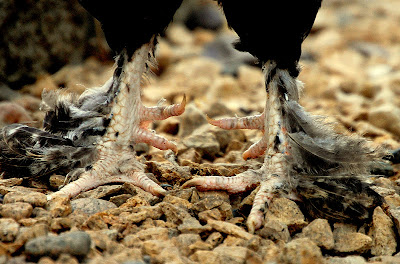 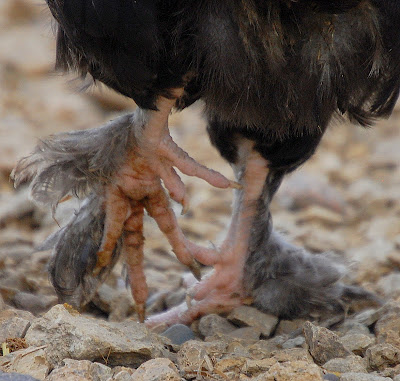 The bigger boys aren't very nice to Konrad. They don't physically pick on him, but they only allow him on the outskirts of the group.
He's not allowed at the 'cool kids' lunch table. 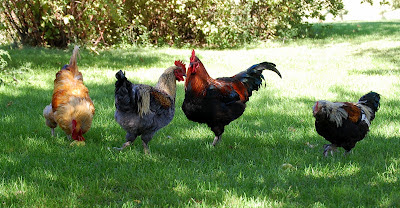 The others sometimes chase him off when they find a tasty snack and they don't want to share it with him. But Konrad is patient, he just keeps trying to befriend the bigger boys. 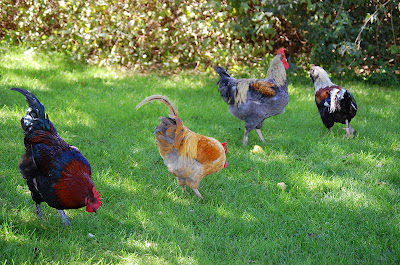 Konrad may not be as magnificent as some of the older boys, yet, but he has something going for him that the other boys don't.

Like the scientist, Konrad Lorenz, after whom he is named, Konrad the rooster is a thinking man.
He is a problem solver.

I was working in the garden one day, and the roosters trotted along with me, hoping that I would save them a little work by stirring up some tasty bugs.
When I failed to produce anything to their liking, they eventually lost interest in what I was doing and wandered off to check the raspberry patch nearby.

Our yellow raspberries are ripening, and they are a tempting treat for the marauding band.
I had to chuckle at the persistence of my feathered friends as they stood on their tiptoes, and occasionally jumped to try to reach the sweet fruits. 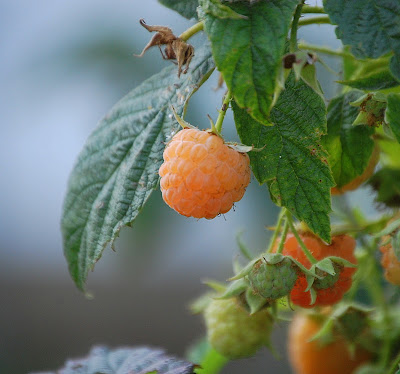 The roosters are able to pluck all the fruit that grows closer to the ground, but they miss out on some of the elusive, golden fruit at the top of the raspberry canes, just outside of their reach. 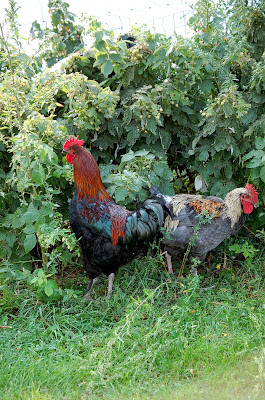 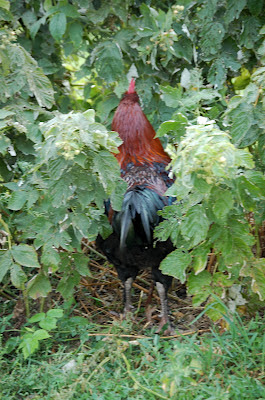 We tend to have a lot of birds of prey flying over during this time of year, checking the newly harvested fields for an easy snack, so I try to keep an eye on the roosters when they follow me out to garden in the back of our property. Although roosters are fairly large, that doesn't stop the hawks from trying to nab them.

While I was busy working, I began to wonder where Konrad had gone, I hadn't seen him for some time, so I stopped what I was doing to take a look.
I heard a rustling sound coming from the back of the berry patch, and when I peered around the back, I had to chuckle at the resourcefulness of my little buddy. 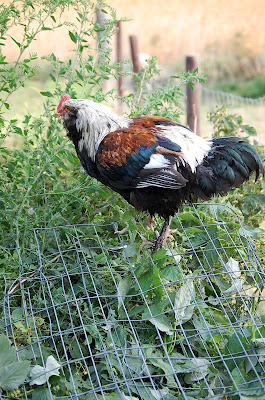 He found a piece of fencing that had been leaning along the side of the raspberries, and he climbed on it until his weigh toppled it over onto the top if the patch where he was able to reach all the best fruits. 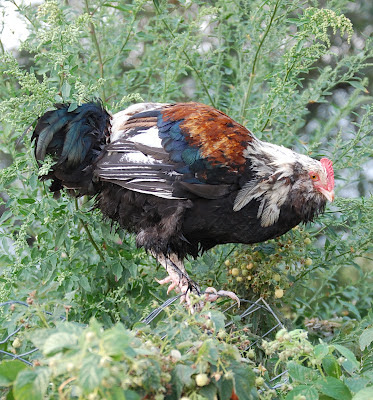 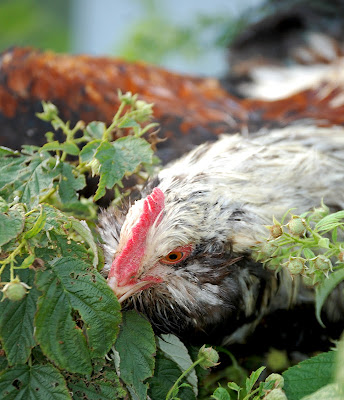 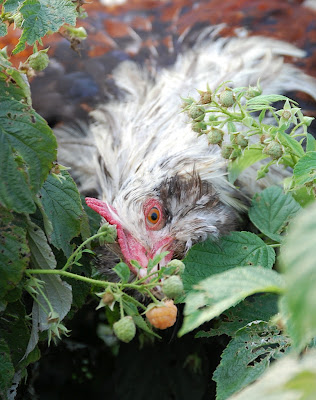 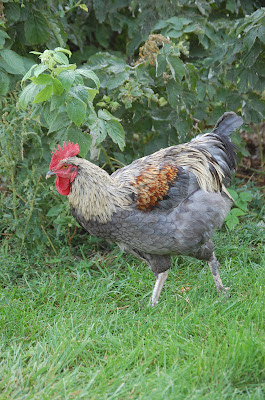 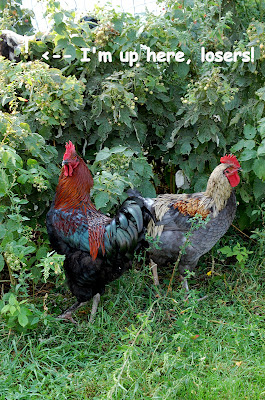 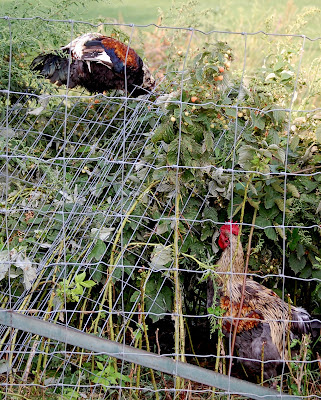 "Seriously, dude, how'd you get up there?" Hi IS going to be a handsome boy though....Salmon Faverolles are cool!

Three cheers for the underdog!!!

He has amazing coloring...

Such beautiful roosters! I love them. Konrad is cute too, I bet in time he will be just as beautiful as the other boys :)