Confessions of a lazy gardener

I am going to have to admit it, my garden has been woefully neglected this year.....it is a disaster! We have just had too many things going on between job issues, the wedding and life the garden has been lower on the priority list. To make matters worse, the weather has been dreadful this year as far as gardening goes.....unless you are a weed....then you are flourishing joyously in my garden. The cool wet summer has created a perfect environment for some nasty fungus to take over my garden. 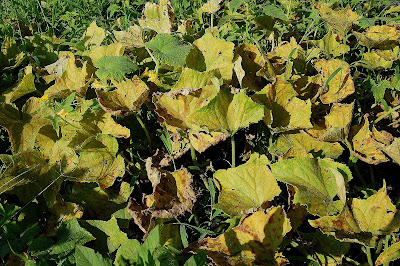 My tomatoes have only attained the size of golf balls and remain hard little green orbs, never ripening or even showing any glimmer of a blush. Notice the withered fungified leaves. 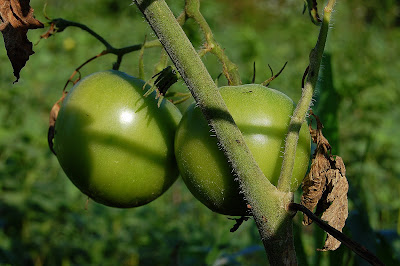 I did spray an organic fungicide a couple of times and it seemed to help momentarily, but the effects were short lived. I try to keep things as organic as possible........which is somewhat a mute point considering that I live in the middle of corn fields that have crop dusters flying over.
As soon as we got a few days with warmer temps my broccoli promptly bolted, leaving it only suitable to feed to the critters. 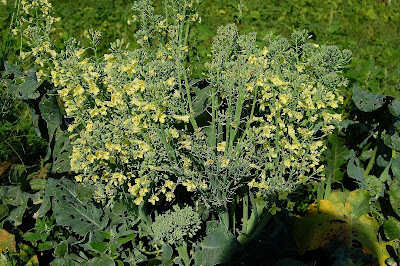 Most of my green beans also succumb to the evil fungus...well, that and the proliferation of weeds that have taken over. 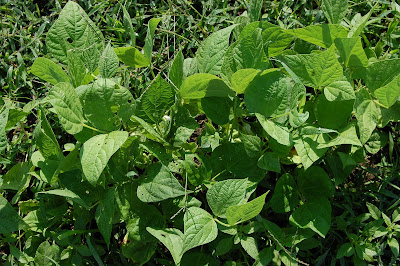 One thing that has not been a problem this year though, bugs. I think I have some friends to thank for that. Rooster Cogburn and Charles Bronson spend their days combing the gardens for insects and gobbling up every little creepy crawly that crosses their path...they have to do something for excitement, since I don't let them in with the hens. 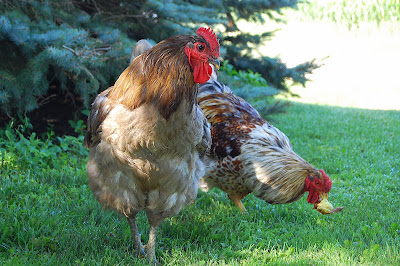 We also have tons of toads this year. The wet summer has provided them with plenty of places in which to lay eggs and an abundance of food. 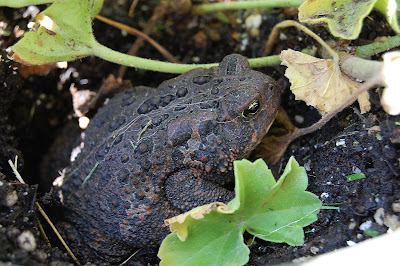 It is hard to tell from the picture, but this toad is so fat that her skin is absolutely stretched as far as it can go to the point where it is shiny. 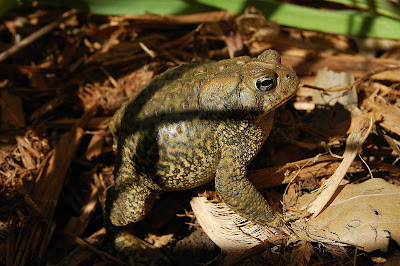 A few things are doing remarkably well. My pear tree is loaded to capacity again this year. This poor tree gets so heavy every year that branches break with the weight of the fruit. 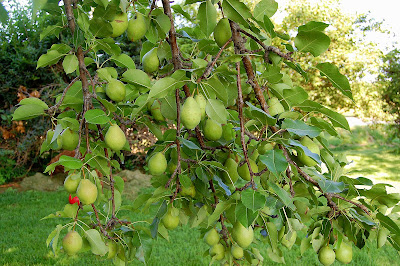 The apple trees are equally laden. Some of the apples are a little buggy, but will still be good enough to cut the bad parts out and do some canning and freezing. 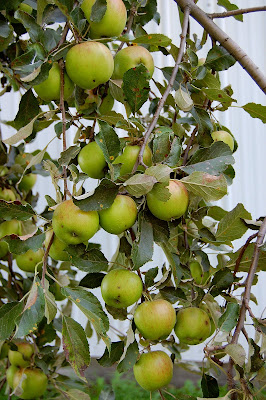 Although there are weeds as tall as I am in my potato patch, the potatoes are looking really good. I planted 20+ pounds of potatoes and should end up with about 150 pounds to store for the winter...there is nothing like fresh potatoes! 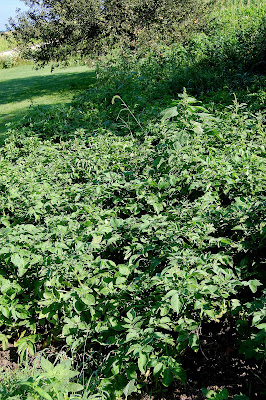 I have just a couple of pumpkin plants, this one is a white variety....you should know by now that I don't like "normal" things so I had to find something kind of funky to plant. 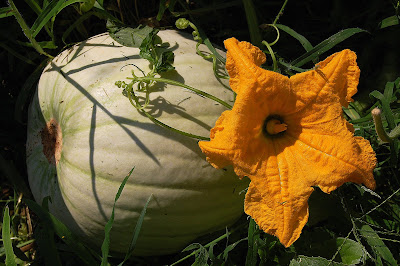 My Butternut squash is fighting the fungus as well. It has set some awesome fruit and I am hoping that the vines can survive until the fruit has ripened. 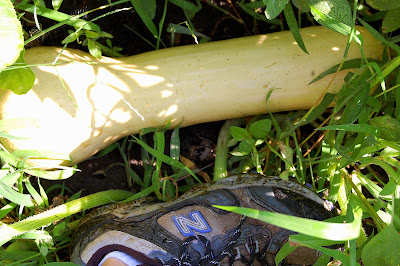 Fungus on cantalope as well :(. 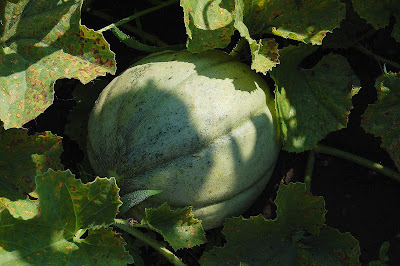 The peppers are doing OK so far. I sell a lot of peppers at market and have around 60 pepper plants so I am hoping that they continue to do well. 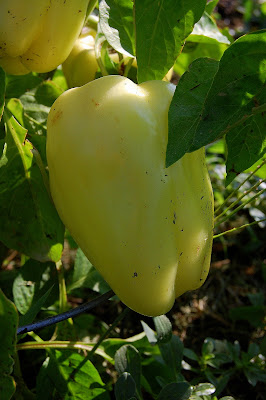 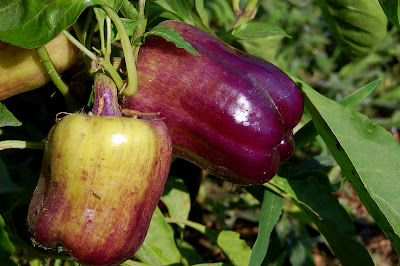 OK, That was hard for my OCD self to show things that are not going well...it is even hard for me to look at those weedy pictures!
Tomorrow we will be back to sheepie news. I am leaving this afternoon to take my ram to Juliann's Little Country Acres farm in Illinois so that she can give him a ride the rest of the way to his breeder in Michigan.....Marie is going with me, and that is always an adventure!
Posted by Crosswinds Farm at 8/12/2009 11:38:00 AM

I always say I grow a great garden, but am a harvest failure! This year I am trying to be better but it seems that everything is ready at once and at the busiest times!

Your garden is certainly trying - and the "orchard" is awesome!

your honesty makes me feel a wee bit better
i am looking for a market for lamb's quarters...cause i'm a super star at growing that!

Really fun farm blog to read! I liked seeing what you grow, and looking at your lovely sheep.