Lambing season has officially ended at Crosswinds Farm. With only two ewes left to go on Tuesday, first-time mom, Cassie, had a gorgeous ewe lamb with the softest, crimpy, single-coated fleece. This ewe lamb is either fawn or mioget-leaning more towards fawn. These pictures make it look like there is a yellowish cast to the fleece indicating mioget but in reality I am not seeing that...I will give it some time. Her sire is mioget and her dam is modified as well. 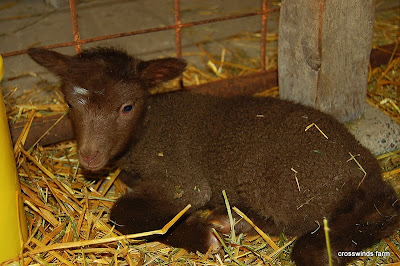 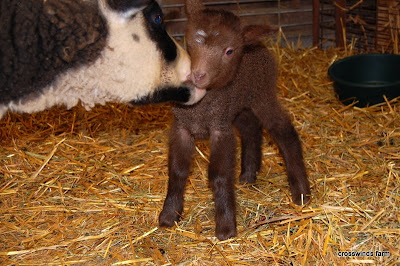 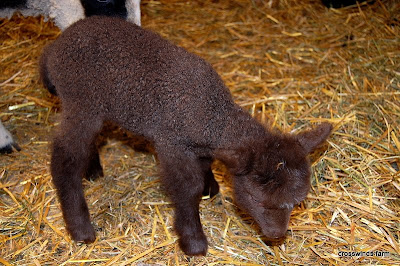 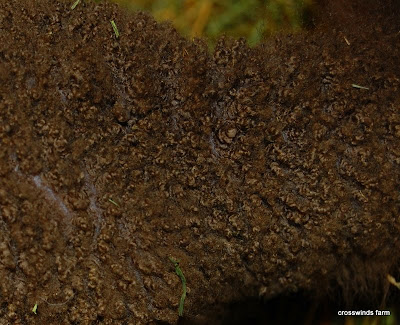 By Wednesday night my final holdout, Lovey, started labor....of course she made this momentous decision just as I was getting ready to head for bed....my sheep have the BEST timing!
Lovey always has twins, so I was anticipating one last lovely set of twins to end the season-SOMEBODY needed to pick up the slack-most of the ewes had single births this year which was quite unusual for my group.
Since Lovey is an old pro at this there was nothing remarkable about her labor, everything was progressing quite normally. The water bag was presented and soon afterwards the first lamb was delivered. It was a nice ewe lamb. Immediately after birth the lamb was having trouble. She was very still and was not attempting to breathe so I quickly cleared her airway and gave her some brisk rubs with the towel and after a few tense minutes she was up and looking for lunch. Lovey began to push again and soon the feet and head of a ram lamb were visible, with a final push he was delivered. Instantly I knew something was terribly wrong, there was only a feeble attempt to breathe and almost no movement. I tried everything in my bag of tricks to save him, but I wasn't able to. I was heartsick. This happens sometimes, and I know that there was nothing else that could have been done, but that doesn't make it any easier. This is the most difficult part of shepherding. I am thankful that at least one of the twins survived.
This is the lucky little ewe lamb..............I guess now that all of the lambs are on the ground I should start assigning some names. 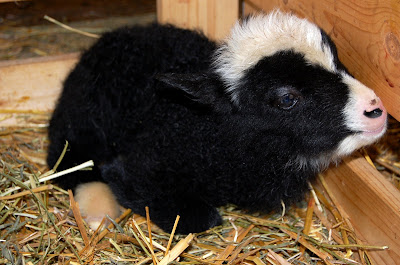 I am keeping a close eye on her as she seems a bit less vigorous than most lambs. She is nursing well, in fact, Lovey always has a huge udder and is producing enough milk for the twins that she was expecting so I know that the lamb is getting more than her fair share of milk-no problem with that. All of her vital signs are good-she just seems pretty quiet and subdued. I am not sure what happened with this pregnancy-just one of those things, I suppose. I still have them in the lambing jug and have cut out Lovey's grain ration completely to slow her milk production a bit. They won't be going out with the rowdy group for another couple of days until I am certain that everything is OK. 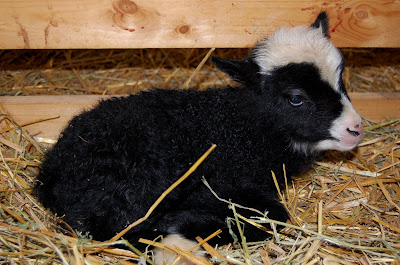 The rest of the group is doing great and growing by leaps and bounds...literally. What a nice crop of lambs this year. 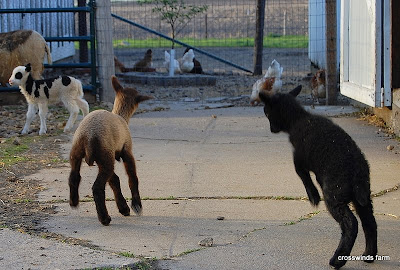 It has been raining here for the past couple of days, so I am hoping to get individual pictures for a blog post of each lamb once the weather clears........maybe they will even have names by then!
Posted by Crosswinds Farm at 4/21/2010 02:38:00 PM

Email ThisBlogThis!Share to TwitterShare to FacebookShare to Pinterest
Labels: 2010 lambs

I'm so sorry to hear of your sad sayonara to lambing season. Hope the little ewe lamb rallies well. Cassie's ewe lamb really is a stunner. At least you got GIRLS!

What a gorgeous crop of lambs! Well done those girls. Sorry to hear of your heartache, the joys of shepherding eh? The remaining twin is beautiful though x

i am so sorry about your little ram...what awful news!
my problem with playing farm...i can't stand losing the critters...all i could do to keep from crying when i found out the neighbor dog killed a guinea hen today
sigh
thank heavens you saved the little girl...i hope she pulls through..maybe she's just going to be a serene little thing...serena :)

they are all beautiful and i look forward to sunshine lamb pics (the sun is coming back, right?)

Sorry to hear about the loss. The rest of them definitely look full of energy. They are awfully cute.

Sorry to hear about your ram, just one of those things, but we all know it is not any easier. That little ewe is a sweety, she looks so calm.

I love your little fawn/mioget ewe lamb! I can't wait to see how her color develops. Sorry about the loss of your ram lamb - at least you were right there to help and did all you could. His twin is such a cutie. I hope she's getting more active and thriving like the rest of your lambs.