So, it was  minus 13 degrees with a minus 32 wind chill when I did my morning calisthenics, A.K.A. barn chores.  Who needs a gym membership when you can walk out your door wearing 20 pounds of extra clothing, climb over fences (because the gates are frozen), carry multiple buckets of water to fill waterers who's heating elements can't handle such frigid temperatures, all while fighting your way through snowdrifts covered with a layer of ice? Much more fun than running on a treadmill next to some guy in sweaty gym shorts.....hmmm.....6 of one, half a dozen of the other.

It has been a strange winter and we have had more than our share of cold and snow, but a couple of days ago, when it was warm out... a balmy 20 degrees, we got a bit of wet, heavy snow that helped me answer a couple of questions that had been tormenting me. One thing that was still puzzling me was the mystery of who killed Blue-ster Rooster back in December. It's not like I have been lying awake at night, pondering about it, plotting my revenge....OK, maybe there has been a little revenge plotting...but mainly I wanted to know who the culprit was in order to keep the rest of the flock safe. I couldn't figure it out, until the wet snow last week revealed the secret. 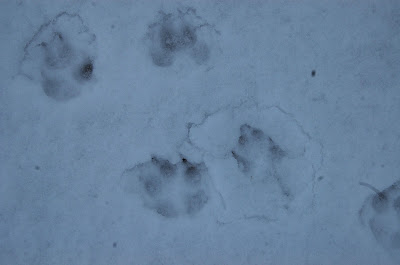 Winding along the chicken run... 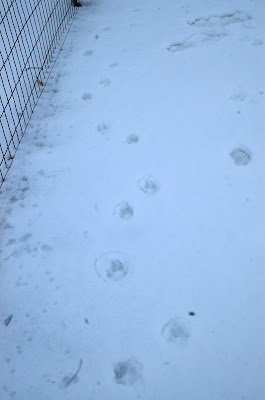 Back and forth along the fence...fox tracks! 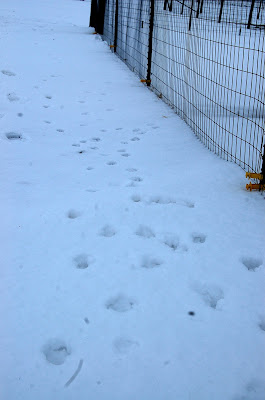 It seems as though a fox has been frequenting our barnyard in search of a free meal. Ever since the rooster-eating incident the rest of the flock has been locked up tight at night, and there is electric fencing along the perimeter, so at least the girls are safe. It is still a bit nerve-wracking knowing that there is something prowling around trying to eat your friends. After mentioning the tracks to a neighbor, they commented that they had seen a large Red Fox sitting across the road from our place several times in the early morning hours....this may have been useful information a few weeks ago, but, whatever, mystery solved!
The other thing that had me baffled was the huge amount of barn cat food that we have been going through. We had a similar problem over the summer and it turned out that there was a  GIANT RAT  large opossum
that had been gorging itself on our dime. But this time I was leaning toward another suspect. I was pretty certain that it was an inside job. You may  remember a couple of months ago we acquired another barn cat. He was "gifted" to us by an anonymous donor (dumped at our farm). He was kind of small, and needy, and meowed constantly. Being that I have "Sucker" tattooed on my forehead, I felt sorry for him and we kept him..
Earlier photo. 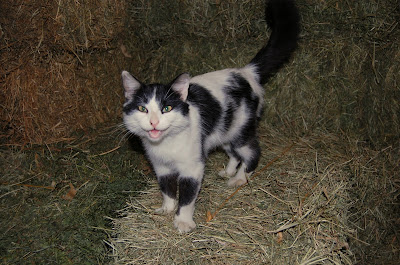 Well, Helios Maximus Manmonster has grown, and is less talkative than he used to be, but he sure likes to eat....a lot. The way the food was disappearing I was beginning to wonder if I could afford to continue feeding him. 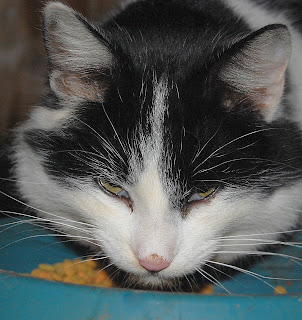 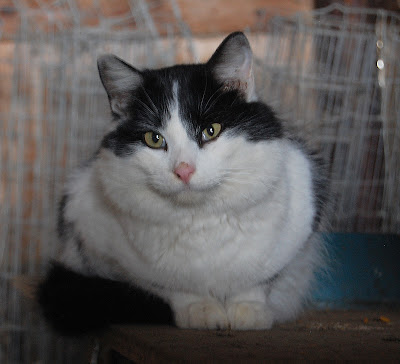 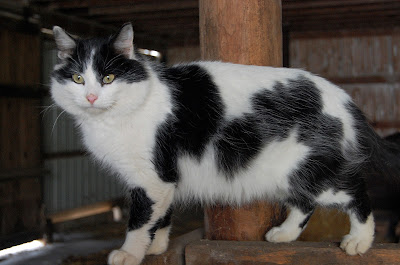 "I'm innocent I tell ya, innocent!"
I have witnessed, on many occasions, the fact that Manmonster does consume a disproportionate amount of  food compared to the other barn kitties. As it turns out though, in this instance I was misguided in my suspicions-he was falsely accused.
I found supporting evidence in the snow. 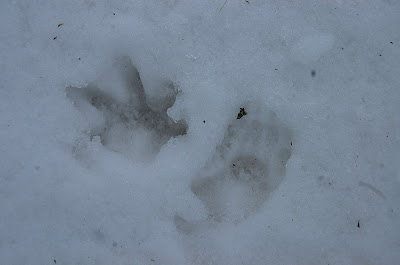 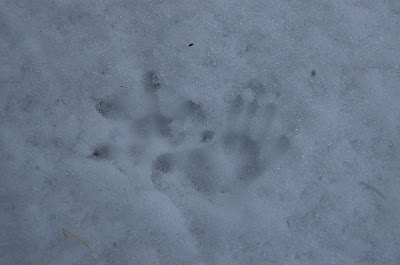 Opossum tracks all around the barn leading into the feed area. They' re baaack.Yet another one of the creepy little naked-tailed varmints has moved in and is taking advantage of the free buffet. I'm not sure what I am going to do about this breaking news, but I am certainly not going to feed that mangy critter for the rest of the winter! I have been putting the cats food away after evening chores. But, as cold as it is, I hate to take food away from the legitimate borders for the night just to banish the freeloader. I think I see a live trap in Mr. 'Possum's future! 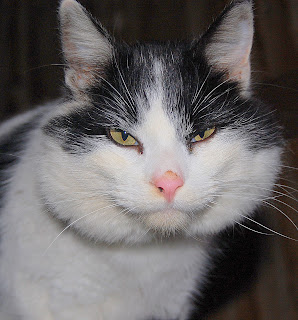 "I told you I was framed!"
Mysteries solved!
Side note/off topic.
Some of you have sent me messages or emailed me because you were concerned about my lack of blogginess as of late-we are fine, not to worry, we have just been dealing with a lot of serious issues concerning our aging parents over the past couple months and I have been a bit preoccupied with that. Things are getting better and we are trying to get back to 'normal'.....or my twisted version of normal anyway. Thank-you for the kind thoughts : ). Have a lovely weekend everyone!
Posted by Crosswinds Farm at 1/21/2011 06:11:00 PM

Set the trap, they are ugly!! Have a great weekend.

Manmonster has the fattest cheeks of any cat I've ever SEEN! I would have blamed him, too!

Helios is very handsome and looks very grateful for every bit of food he is getting. When I set a live trap to catch a raccoon several years ago, I used cat food for bait. It took all of five minutes before I caught my little buff duck, Flo. Hope you get rid of the freeloader!

What the heck is the matter with your DOGS??? THEY'RE supposed to keep intruders away! Did you forget to mention that to them? I'd put a bounty on that possum's head and who ever brings him home, wins the prize...

You're pretty good at that trackin' stuff. Lots of experience, I guess.

and big hugs about your parents!

Yes, set a trap, but make sure a cat can't get caught! Get a neighbor with a gun for the fox? Or do they have traps big enough for foxes? Good you found out what was prowling your property.

We had a disappearing egg mystery. The chickens weren't laying in their normal nest and I couldn't find eggs for a couple weeks. Solved that yesterday. They are squeezing in between to big bales and have a huge nest way back. I can't reach it and need to find a big stick to fish out all the eggs. (They will be frozen solid so they are fine to eat still.) Sneaky chickens.

OH my--they are awful little things. My dog goes nuts when he finds one. Good luck. That cat is beautiful.

Just wanted to comment of Helios's awesome name, and well done on the detective work. Good luck with the traps.

Helios has certainly turned into a beautiful cat! Yes, set a trap for that darn possum. And don't relax too much about that fox only coming around at night. We've had several fox strikes in broad daylight, around 10-11 a.m. But maybe your dogs are doing their job at that time of day.

Helios is beautiful, but I would also have suspected him!!! Good luck..
And best wishes on your efforts with your aging parents. Mom lived with me her last 2 years (she was over 101 when she died - fully alert but wheelchair bound) and it was a tough but also wonderful time.

Just found your blog, and I thought WE were the only ones dressed like space invaders in the dark mornings, stumbling around in the ice-encrusted snow feeding animals! Nice to know someone else is bust at it, too!

Your dogs need a refresher course in varmint control. Bullet will offer his services. It was awesome the other day watch him chase a fox all the way to the neighbors. He also disposed of the possum at our house this winter. Coyote hunters stopped here the other day trying to get one they saw in the field. I bet they would help with the fox. Love the cat. He looks much bigger and happier.

Helios is a cutie! Looks like farm life agrees with him.