Something new is happening at Crosswinds Farm this year. We have adopted a section of the road that runs in front of our farm. We are now responsible for picking up litter along the ditches twice a year.

No, surprisingly, this is not court-ordered...why would you even think that?

We volunteered for this project...and when I say, "we", what I really mean is: I volunteered, and I also roped my husband, and my sister Marie, into helping. What do we get out of this? Well, we get the satisfaction of looking at clean ditches along our road, and we get this nifty sign in front of our house. 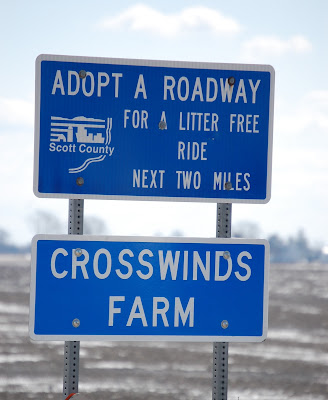 We spent a good chunk of the day last Sunday picking up litter along the 2 1/2 mile stretch from our place to the edge of town.
The amount of trash along the road was unbelievable, but it provided an interesting, yet completely unscientific, insight as to who exactly is littering. I think the fact that a High School was in close proximity had much to do with our findings. Ninety percent of the trash we collected was beer cans. More specifically, beer cans from really cheap beer. I'm not sure what can be deduced about the folks that are tossing trash out of their car windows, other than their taste in beer is questionable, but I found it interesting, nonetheless. I don't even drink beer, so I'm not judging, but if I had to speculate based on what we picked up, it seems that a conclusion could be drawn that taste in beer has some bearing on one's propensity to litter...or maybe there is just one really slobby person out there that drinks a lot of cheap beer
I'm just sayin', just an observation.
Does that sound judgey?
I shouldn't judge, but after spending several hours up close and personal with other people's smelly cast-offs, one tends to get a bit judgey.

This is probably not a good job for a crotchety, old, OCD woman like myself. Seeing all of this garbage completely stressed me out.

This pile really irked me. It was already in a bag so it could have been easily placed in a dumpster, and these cans were all returnable for deposit...okay, so the return for deposit is only 5 cents per can, but given the astronomical number of cans that we found, these folks could have returned the cans and purchased several cases of their classy beer from the proceeds. Geesh! Come on guys, return the cans for the cash, throw them in the recycling, or at least throw them in a dumpster, they're already in a bag for gosh sake! 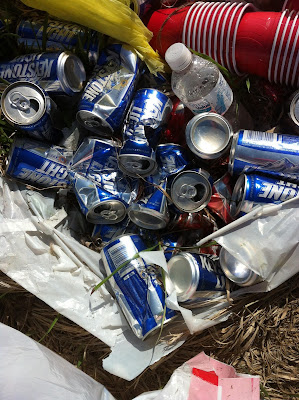 The rest of the trash was a mixture of miscellaneous debris.
Luckily, the county provided us with lots of trash bags and some heavy gloves with which we could pick up all of these treasures. We found everything from car parts, to cigarette packages, empty boxes from condoms, yes, even some used condoms (I did NOT pick those up), and a used pregnancy test (perhaps the previously mentioned condoms did not do their job?), crushed cell phones, sunglasses, chewing tobacco containers....a few trucker bombs..O.M.G., not enough antibacterial lotion in the world for those.

Seemingly, this relationship did not end well. 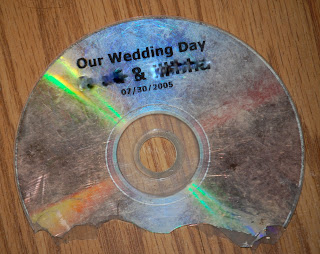 Marie and I (with the help of our feisty 79-year-old mother, who happens to have dementia), started our collection at the end of the road closest to town and worked our way back to the house. For those of you who have met me and Marie, you know how flaky we can be, so you can probably guess what it might be like with Mama thrown into the mix.  Before you report us for elder abuse for dragging Mama around to pick up trash, you should know that our mother lives for this kind of stuff. She prides herself on the fact that her father taught her to be environmentally-conscious back in the days when that wasn't even a 'thing.'

As one might imagine, the three of us got easily distracted a few times along the way.

Marie made friends with a little field mouse that captured her attention.
Yeah....it's a wonder that we aren't still out there wandering around aimlessly. 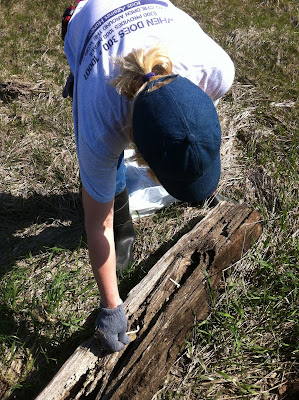 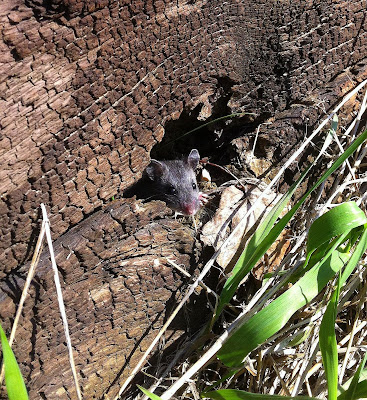 We also found this Crayfish, who was angrily threatening me with his one good claw.
Who's being judgey now Mr. Crayfish? I'm only trying to clean up your ditch! 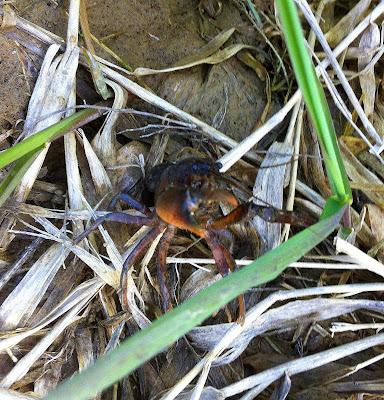 I found a Praying Mantis egg case...
we are going to talk more about those in another post. 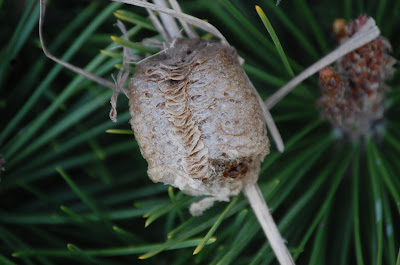 When all was said and done, we ended up with a ginormous pile of trash. Approximately 52 BIG construction-size bags full, and lots of miscellaneous loose bits of junk. We aren't even done yet. Some of the ditches still had standing water from all of the recent rain, so those will have to get cleaned another day. 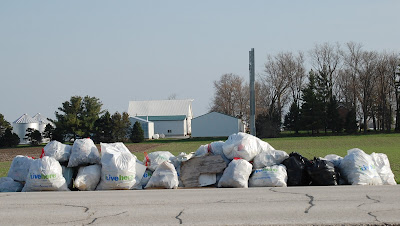 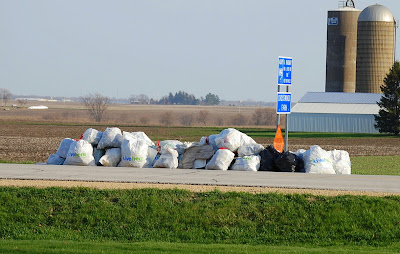 Of course, you know that this project has just set me up for more stress in my life, because now I am going to start twitching every time I see a new piece of litter while driving down our road, and I'll have to stop and pick it up.
But it does feel good to see it all clean.
Posted by Crosswinds Farm at 5/03/2013 01:42:00 PM

I really have to commend you on picking the darned stuff up and am frankly shocked at the amount!
We (hubs and I) recon that England is the dumping ground for Europe as there is a huge litter problem here nearly every where you go. I pick things up to and am not above stopping folk who litter.
Keep up the good work :o)
Rose H

Are you kidding me??? 52 bags of trash? You guys are saints, as if you don't have enough to do already, you are picking up after a bunch of pigs now.
BTW-I love the mouse photo, he would have distracted me too, I think they are so cute. And good call on leaving the used condoms and pregnancy test where you found them. WTH is wrong with people?

Good for you. I am flat out stunned at the amount of litter I get in my front yard and I live right on the edge of town!

I have to admit that traveling other parts of the country has made me appreciate NW Oregon more. We don't have nearly the roadside trash that some other places have.

I'm almost afraid to ask: What are 'trucker bombs'?


Michelle, Trucker Bombs are bottles that are used when drivers don't want to stop and use a restroom. They tinkle in the bottle, seal it up and toss it out the window. Aren't you glad you asked?

Holy cow! That was a lot of work - good for you though -

Your lambs are rocking adorable - we don't have any this year for the first time since we've had sheep (1998) that we haven't had lambs - it is pretty quiet around here.