What's new at the zoo. 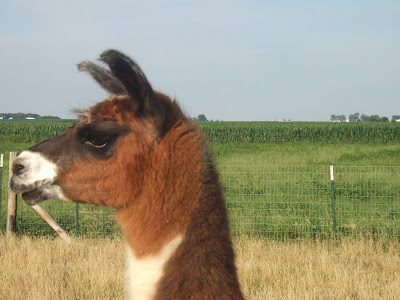 
We had been looking for some time for a llama to guard our sheep, and not having much luck. Then a couple of weeks ago I got a call from someone, out of the blue, that had come across 4 llamas that were in need of good homes. They had an intact 4 year old male, which I knew I didn't want ( I know people that have had trouble with male llamas trying to breed their sheep....yeeesh), they had 3 females, one adult female was already promised to someone else and the little yearling female had also been placed, that left this girl with the fancy eye makeup. Being the suckers that we are, of course we took her. The llamas had been kept up to date on all of their vaccinations and deworming, but their coats have not been sheared for 2 years, so when we got her home I promptly started hacking away the matted mess, and inadvertently created more of a mess.....it's not pretty, hence the "head only" photo!


As for my sheepies, they were convinced for the first few days that I had released the Loch Ness monster into their pasture. Llama was trying so hard to be friends, she had been raised with sheep, so she did not hesitate to try to be one of the gang. She would lumber slowly toward the flock, clearly in a gesture of friendship, that unfortunately always end with panicked sheep scattering in all directions and bawling babies calling for their moms. After a few days of this routine, things settled down and eventually she was accepted as one of the flock.... although the sheep still like her better when she is lying down and is not such an imposing figure.

This will be a learning experience, this is the first llama that I have ever owned so it should be interesting to watch her and learn about llama behavior...........did I mention that she may, or may not, be pregnant??? What was I thinking?
Posted by Crosswinds Farm at 7/04/2007 10:32:00 AM

She's BEAUTIFUL!!! Is she friendly? OMG ~ a BABY Llama? Crias are incredibly adorable....

Waiting with interest to see how it all turns out....

You should name it after Simon Bolivar...