It is a good thing that I am well aware how strange the animals that reside here can be....otherwise I might have been completely freaked out when I checked on my hens this afternoon. It was a beautiful sunny afternoon and I was planning on taking some photos of the hens, but when I came through their gate and rounded the corner of the barn, I was greeted with this sight! 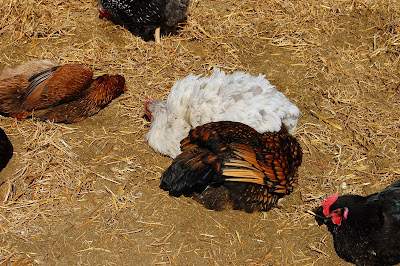 It looked like pure carnage-some sort of chicken massacre. As I mentioned earlier though, I know my strange little friends too well, and recognised that they were merely sunning themselves and taking "luxuriant" dust baths. 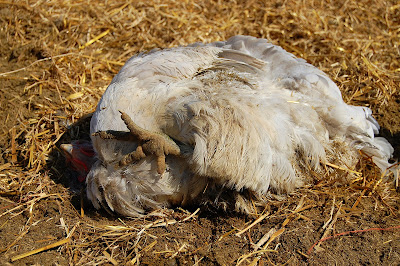 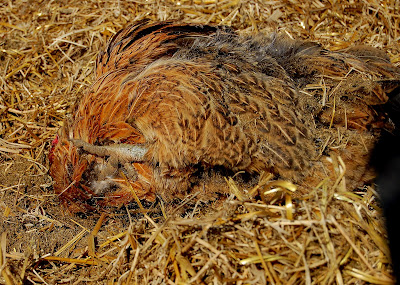 Not even a little bit dead. 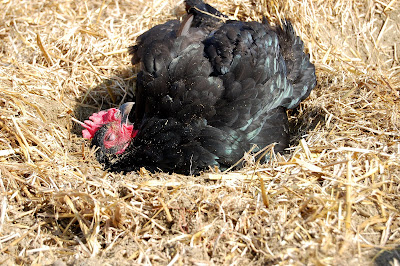 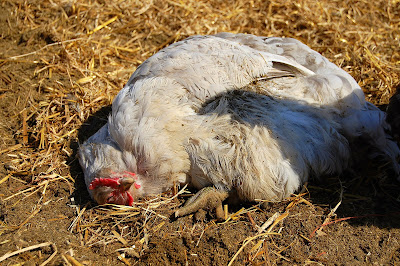 Pretty convincing, I know, but even White Chicken....NOT dead. 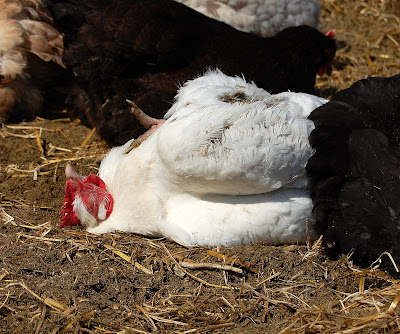 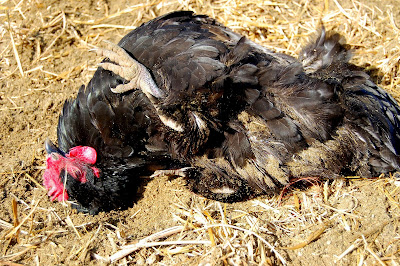 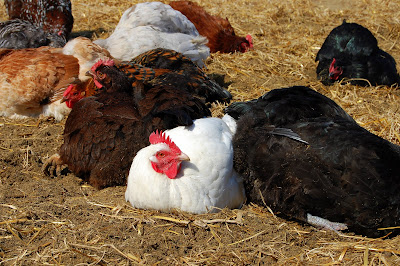 "See guys, I told you she wouldn't fall for it!" 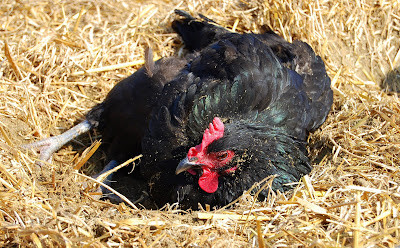 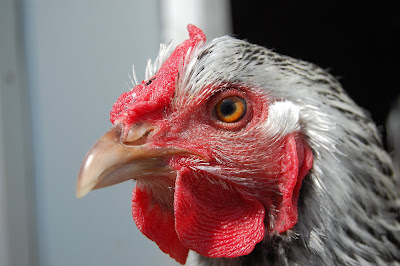 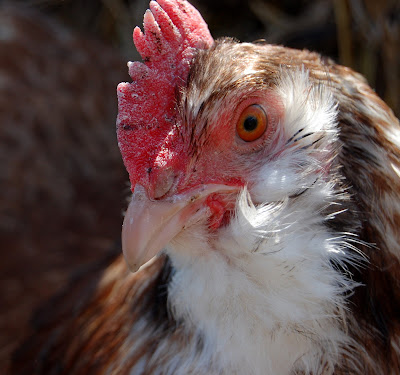 "It was all White Chicken's idea."
When I finally got everyone up to their feet to join the living again, I was able to take the photos that I was originally planning on taking.
I was looking at the photos of my friend Abi's parrots from my earlier post, thinking how beautiful and striking those birds are, and I got to thinking......why am I not giving my chickens credit for their unique beauty? OK, maybe you are laughing because the first half of this post quite possibly does not show them in their best light, but seriously, it amazes me how a creature as simple (not a reference to their mental capabilities) as a chicken can have such stunning feathering, full of intricate patterns, vivid colors, and iridescent shine that dances across their plumage as it captures the light.
Barnevelder 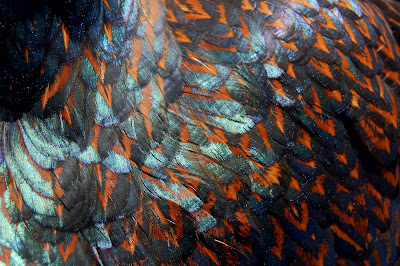 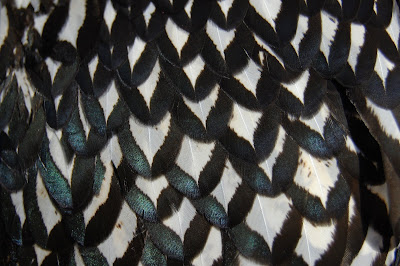 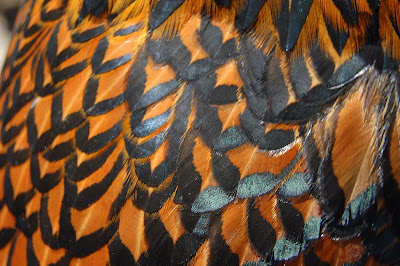 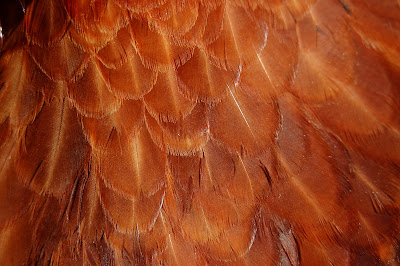 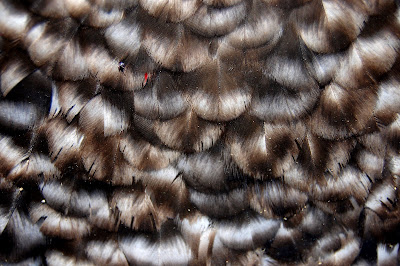 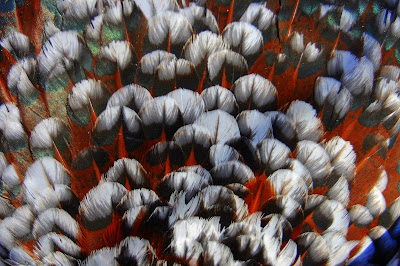 After showing you the dead chicken act, I felt as though I should post something that would recover a small bit of dignity for my feathery flock.
Posted by Crosswinds Farm at 3/21/2009 03:09:00 PM

That is too funny! The first time I saw my chickens doing that in the shavings I freaked out a bit because I did think they were dead or on the way out. I love the pics of the feathers....I have a couple of the Golden & Silver Laced Wyandottes too; beautiful birds!!

Thanks so much for labeling all the feather pix; I'm always curious what breed everyone is. LOVE those speckled Sussex!

I will NEVER get photos like your SO-funny undead ones. My girls can see me coming from any direction, and are always up and looking for a handout before I can get close enough for a "relaxed chicken" shot! Thank-you for sharing; I have never seen so many conked-out chickens!

OMG, what wonderful photos of your chickens! I especially liked the head shots and the stunning feather close ups. I know photographing chickens isn't as easy as it would seem to be. And I'm amazed you got all those dustbathing photos, my chickens are like Michelle's, always thinking there's a treat in my pocket.

That's hilarious!! I also love the beautiful feather close-ups. I recently told Claire of Whispering Acres that until I started reading these wonderful farm blogs I thought there were only 2 types of chicken: hens and roosters! Thank you for teaching me the beauty of them.

OMG ours were doing this yesterday! We had to stop and look at them and have a good laugh.
It always does make one stop and look and make sure they really are okay, lol!

These pictures are hilarious. And I love the speckled sussex. Thanks for the fun AND the education!

..."It was a beautiful sunny afternoon and I was planning on taking some photos of the hens,"

You really need to get a job.


Your dead chickens photos are hysterical and the close ups of the feathers are beautiful!. I hope you had a wonderful weekend!

Too funny! I would have had to look twice!

You know, I'm so glad to have seen that because you have possibly saved me from a total freak out the first time I ever see it when I get chickens LOL. Toatally had me fooled.

Wonderful feather pictures..truly wonderful. How beautiful they are.

ok your chickens are strange. It looked to my like paratyphoid or paramixovirus that all poultry and pigeons get.

When mine sun they usually have a foot out and a wing up. Silly chickens.

It must be a 'learned' behavior from their farmer?

funny story and funny pics of your flock :-)

You're post was so funny. I enjoyed the feather photos.

HA!HA!HA! What a great post!! Zombie chickens. Amazing what a little sunshine, after the winter cold can do to an animal (or person for that matter!!)
Those feather shots were beautiful. I do so love the look of my Barnvelders feathers (previously it was my Wyandottes), but now looking at your pics I think I may need a Speckled Sussex as well!!

ROTFL! That's priceless. They really do look dead in the photos.

Somehow I just read this post the other day and it was too funny! I added a link to my blog because I wanted to share the funny pictures. My chickens haven't done that quite yet, but they are very silly, too.

Your sense of humor is wonderful, too. Thanks to you and your chickens for brightening my day.

Thanks to hippygirl, I had to come over here. HILARIOUS! We have chickens that are 15 weeks old and the first time we saw them do this, we just about FREAKED out. I still get unnerved by it on occassion.