Finally my long awaited lambs have arrived out of my ram Khazar!
Daisy apparently gave in to my threats of squeezing her, if she didn't pop pretty soon, to get those babies out, and went into labor yesterday evening. Everything went just the way I like it, completely uneventfully; discharge, panting, pawing, pushing, 15 minutes later, by 7 pm, lambs. First she delivered this handsome little ram lamb. He has amazing fleece already. I love his markings, although one of his yuglet (eye patch) markings is not complete...but with this kind of fleece we overlook those minor details! 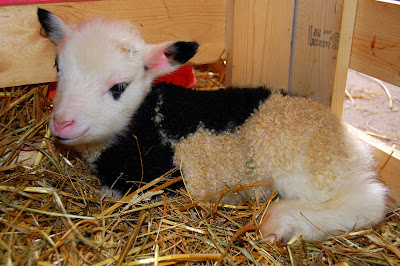 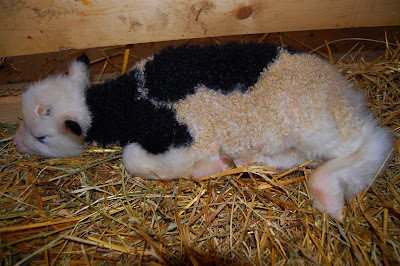 Then I got this spectacular little ewe lamb! Also fabulous fleece-soooo crimpy neck to breech.

Both lambs were up and nursing in short order and hopping about the jug within minutes. 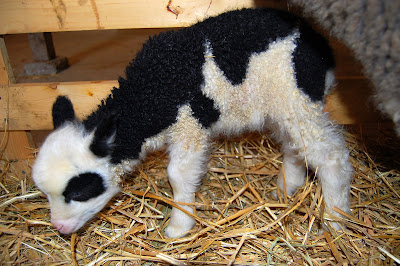 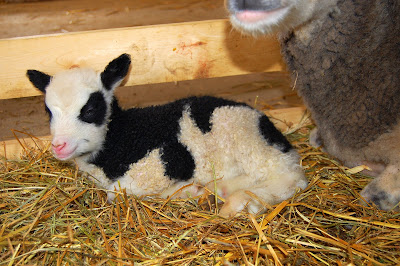 Not to be outdone, Lilly decided that she might as well join the party when she saw that her sister, Daisy, was in labor, and started showing early signs of impending birth. I put Lilly in the lambing jug next to Daisy, which may have not been the best idea, Lilly was so anxious to have her own babies that she was trying to steal Daisy's through the bars of the jug. I ended up placing some towels in between as a visual barrier and that quieted things down considerably. I sat and watched Lilly for a couple of hours. Lie down, stand up, paw the ground, lie down, pant, pant, pant, circle, circle, lie down........yeah, I know how to party on a Friday night! I knew that these were early signs and it could be a while before we saw the fruits of labor...so to speak. Those of you that know me know that I am not, by any means, a late night person...we pretty much roll up the carpets here in Eldridge around 9pm, so long about 10:30 I am thinking that maybe I should bring my blankie out and sleep in the barn. Then I got a text message from my sister Marie, who had been out with some friends ( Whaaaat?? people do those sorts of things? Go out on a Friday night?) wondering how things were going. I told her that Lilly was in labor and since Lilly is Marie's ewe, Marie decided to come out and hang around at the "bum watching party". Long story short, we didn't see the first lamb until around 1:30 am ( I KNOW).

Two ewe lambs! The first one looks like two different sheep...here is her right side... 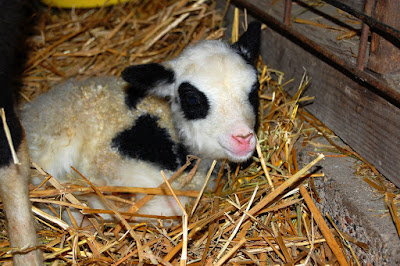 ..And here is the left side. Again, really nice crimp to her fleece (thank-you Stephen). 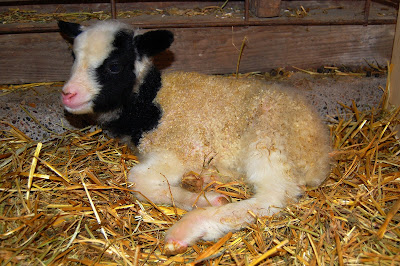 Next this little princess made her debute. Her fleece is incredibly soft, not super crimpy, but soft and single coated. Her little well defined spots are hilarious. 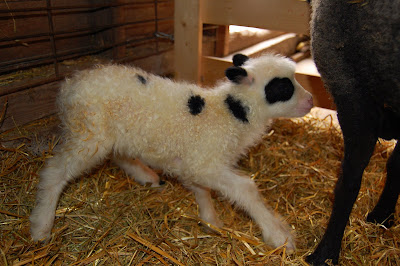 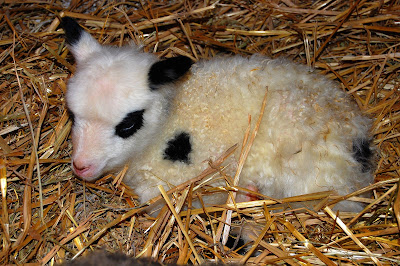 She even has one hoof that's half black and half white. 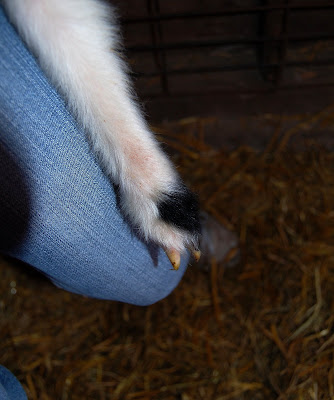 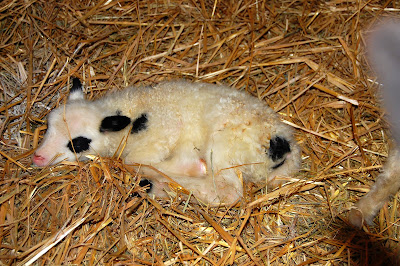 So...now we are down to two ewes left to lamb. Guinivere, my solid moorit ewe bred to my ag/gulmoget ram (she is a first time mom and likely to have a single), and Edrea, my beautiful fawn Katmoget ewe bred to Zar.....I can't wait for the grand finale!
Posted by Crosswinds Farm at 4/25/2009 11:24:00 AM

There has been an amazing amount of spots on the blogs lately. Such fun to see all of them. Yours are wonderful!

Those are some flashy lambs! Sharrie's right, it seems to be an amazing year for spots!

I love the black ears on the mostly white lambs! TOO CUTE.

I just love spots!!! I could not imagine lambing without spots...I get so excited when I see when....its almost better than...opps...well you know what I mean! I am totally jealous of the twin ewes!!!

OH, the colors, the colors! I wish I could feel their fleece, too. They are all beautiful - what a great day's work for the moms!!!

Look at all those beautiful spots! Is that ram lamb what is called a caped flecket? Sure looks like he's wearing a cape! And I love the black ears (or are they brown?). Congratulations on all four!

Aww, that last one's markings are so sweet!

How did I miss this post!? Those lambs are fabulous, congrats!