Now we're on a roll!

Now that's more like it! At last I am getting some cooperation from my girls. I had Fallon written down on my calendar as due to lamb on the 19Th, but she lambed today, so she was only a couple of days off....or my calculations were a couple of days off...she didn't read the calendar...whatever. She was a first time mommy so I was fairly certain that she had a single in there, and she did. One little rammy lambie. He looks black right now, but he is going to be grey. Very nice little guy and he has a really tiny tail (that's a good thing). Fallon did a spectacular job and had this boy up and nursing within about 10 minutes. It will never cease to amaze me how quickly newborn lambs are up and running and know exactly where to find their dinner after having only taken their first breaths moments before. And when I say running, that is precisely what I mean! 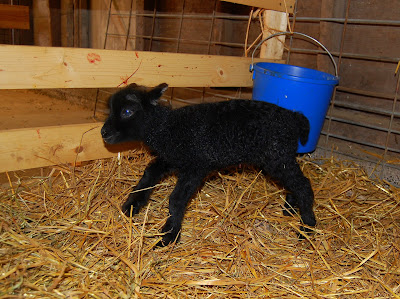 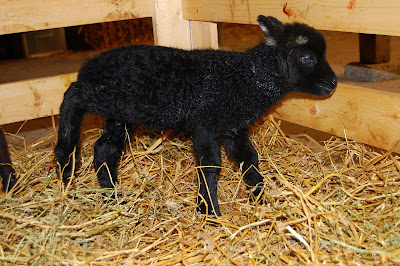 A flurry of activity and then, CRASH! 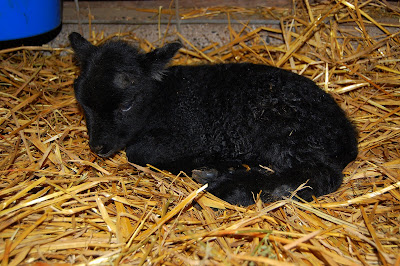 So, for those of you keeping score; two ram lambs, two ewe lambs, 3 ewes have lambed and there are four more to go.........we haven't even gotten to the spotty sheepies yet ;).
Here are some more pictures of Willow's boy born yesterday (he seems to be the crowd favorite so far). 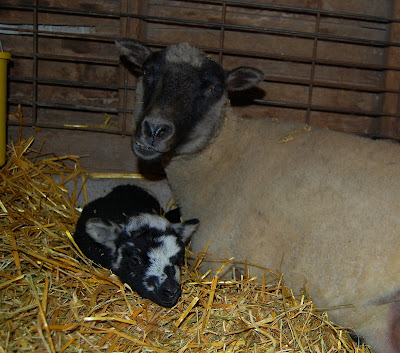 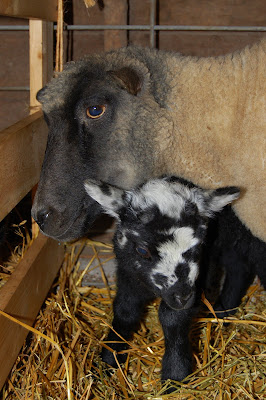 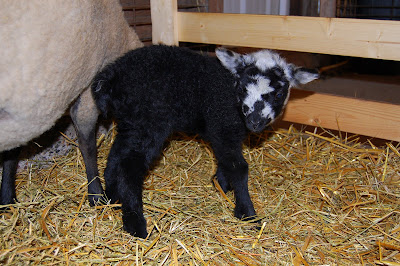 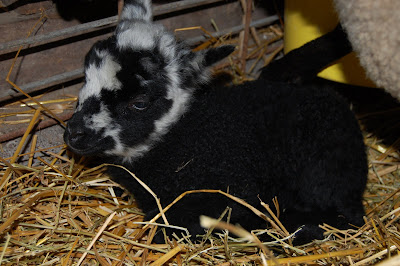 And look how huge Lovey's girls look at just two weeks of age. Boy, they change so fast. 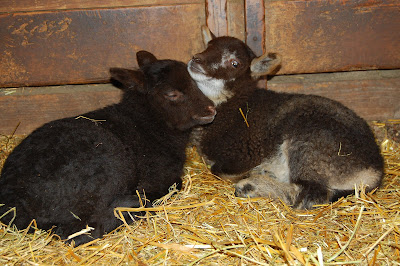 This is the usual type of picture that I get of Lovey's gulmoget girl, she is A BIT friendly and every time she sees me coming she runs full throttle toward me, and she is a TANK! 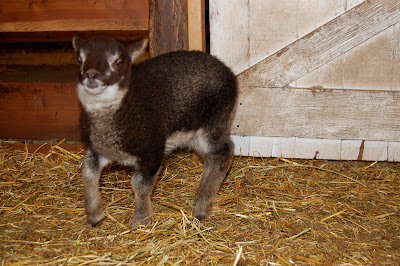 I am so appreciative of the fact that, thus far, all of the girls have had the courtesy to lamb in the daytime...despite the fact that I have been getting up to check on them a couple of times at night....I probably shouldn't have said that....it's like when you go out riding with someone and they say, "My horse never bucks", and then you are scooping them up off the ground 10 minutes later...yeah, I'll probably be delivering lambs at 2am....
Posted by Crosswinds Farm at 4/21/2009 04:49:00 PM

well, this IS more like it :)
wonderful pics...i love willow's face in the pictures...she looks like such a doting momma
i like your little tank girl too...she's a cutie!
oh how adorable they will be bopping around in the pasture together soon!
enjoy your 2am lambing next time, lol

Willows boy is handsome! And of course I love your gully girl! I'm hoping for daytime lambing too....could you have your girls talk to my girls? :)

I really think a little lamb would fit in my apartment, although Emma (the cat) might not appreciate it. Let me know if you decide you just don't want any more lambies! Yeah, right - you'll probably be wide awake and loving every minute of the 2am lambing!

Isn't it great when they follow the other sheep's example and finally lamb. And I'm jealous on the daytime lambing. I only had one that did that and I think that was to spite me as I had gotten up in the night to check and gave up by morning lol. They all look lovely so far. I'll cross my fingers for more spots for you!

Mine all lambed in the daytime, too - and I didn't even bother with middle-of-the-night checks. Lovey and Bronwen look similar; I'm so glad my oldest gully girl has decided to be a pet! She was SO wild at first.

Wow, looking great! They are sure growing.

Fabulous! They are all so wonderful! I can't wait to see the spotted ones! How do you get them to be friendly? Mine are friendly for the first day or 2 or 3, but then get all skittish....I want one that runs for me like Luna does!

All of mine were morning (like 7 am) lambings). Very considerate of them!

One left to go - the ever-so-big KitKat! Hers are bound to be moorit.