And now for something completely different.

I promised a non-sheepie post, so here it is. I'm not sayin' that this will be easy to do, mind you, I have 120 sheep-related photos on my computer from just the past two days....and I started lambing April 6th...so you do the math.

The past few days have been devoted to lawn and garden. The ground has been so wet here this spring that there have not been many opportunities to get the garden tilled between the rains. Finally we had a break in the weather over the weekend and my brother-in-law was kind enough to bring out his tractor with the tiller and go over the garden areas....of course, I did bribe him with a fresh strawberry rhubarb pie, but he's a pretty good guy and likely would have done it anyway...I'm just sayin' the pie didn't hurt anything.
Today I was able to get a good portion of the main garden in. I planted 24 pepper plants and left space for 30 more, I usually put in somewhere around 50 of them to supply me with peppers for Farmers' Market all season. I planted 4-40 foot rows of green beans, 2 rows of peas, a row of cucumbers (I am trying a bush variety this year). I only put in 12 tomatoes this year, I planted 50 or so last year and couldn't keep up with them all.......of course that is nothing compared to the 70 that my good friend, Miss Effie, planted last year...or was it 90? Yeah, and Miss Effie doesn't do Farmers' Market, she just has a canning addiction problem. The rest of that garden will be melons, pumpkins and some yet undecided somethings that I might find at market. The second garden will be devoted to potatoes and sweet potatoes. I bought 1o pounds of seed potatoes; 5 pounds of Kennebec, which is a nice baking potato, and 5 pounds of Yukon Gold. Both varieties did well for me last year and I was so sad when we used up the last of them in January. So, now I have a table in the garage full of cut up seed potatoes. They should be dry enough in a couple of days to plant. 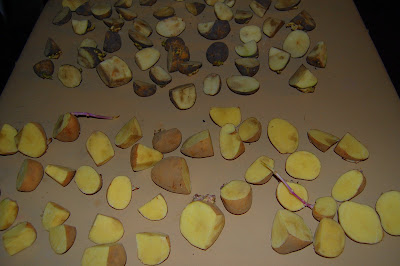 We also were able to do a big spring cleaning on the barns, and dismantle the lambing jugs to put them away until next year. Another thing that has kept me busy.........I have been at war! I have been doing battle with an unseen enemy for the last two weeks. Oh, sure, the evidence to prove that he had been there was quite obvious, but he was never brave enough to face me to do battle. Every morning when I would go out to do chores, there it was, freshly piled dirt and tell-tale tunnels through the lawn. So I would stamp down the tunnels and replace the dirt hoping that he had decided to pack his little moley bags and go on his merry way. But every morning it was the same routine....Ok, Mr. Mole, I've had enough......it is ON! 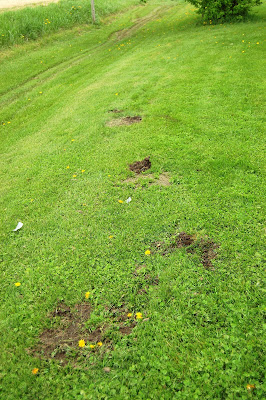 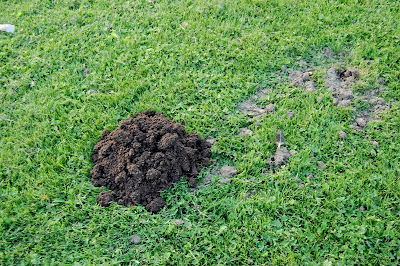 Now, I am a live and let live kind of gal, but seriously Mr. Mole, you can go anywhere out here.... 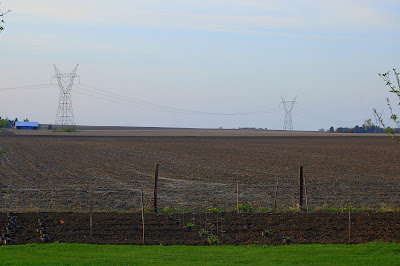 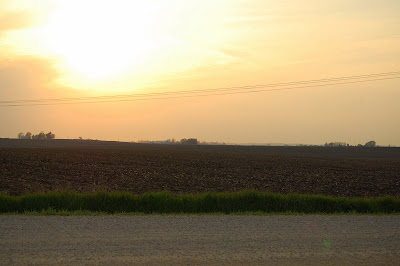 I can't see poisoning the critter, or using those medieval spiky traps that snap down on the tunnel when he is crawling through to shish-kabob the little varmint. So, I had to come up with another way to banish the little beastie. When I see a fresh hill, I stomp down the tunnel leading to it and then ( I know, this sounds mean) put the garden hose into the hill full throttle......this won't drown the little booger, don't worry, he just pops up out of the hill..or somewhere close by..and then I scoop him up in a bucket and release him somewhere that his efforts will be more appreciated. If you are thinking that this is some cute fuzzy little cuddle-bug...let me enlighten you. This is a photo of my arch nemesis! 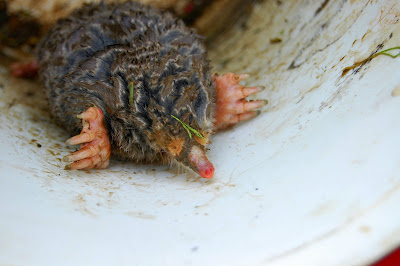 Still feeling sorry for him???? Yeah, go ahead and biggify that picture why don't cha? The stuff nightmares are made of! Sorry Jenny, you probably are the only person alive that actually would think he's cute! 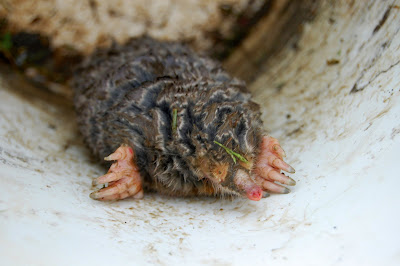 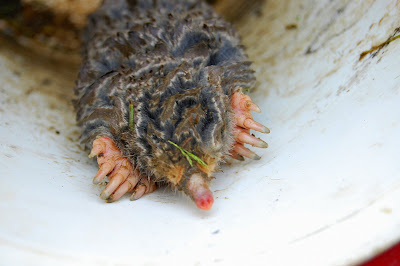 oh you make me laugh! i do miss the cute sheepies! do you really catch the moles that way? that's impressive! they are yucky little things. my parents do the cruel spikey-shish-kabobs--i can't handle that....I have dogs that try to dig them out...I can't handle that either, lol--I doubt it's very successful.
Though it wasn't cute--your post was informational and included great (though some unpleasant) photos.

Yes, he is ugly and I hate to say it, but I do let my cats "mess" around with them. I have not planted anything so now I feel a tad behind, but the weather here in Ohio has not cooperated quite yet. Your lambies by the way are very nice!!!

OK, so it is apparent that I am a freak, because I think that mole is about the most adorable thing I've seen in a long time, except for the lambs of course. But seriously, it has slightly curly fur, kind of like a lamb, and those cute digging feet! I love it! Not in my garden, but really, moles are just cute as buttons in my book. If I had it, I would feed it worms and give it a name. Seriously. Kelly will tell you that I talk to the mice in the barn. I love them too. I had to move a nest of baby mice from a bale that Kelly wanted to move, and I put them as close as I could to their original location, and the mom came back and moved them all one at a time. I was mesmerized. sigh. Back to studying now.

Yes, Tabitha that is really how I catch them, it seems to work for me....there is probably a very "mole hilly" field down the road where we let them go though...LOL.

Kristi, I was really lucky to get anything in the garden when I did, it's raining again now, so I should at least have a nice crop of weeds by the time the sun comes out again.

Claire, my dear, you are studying too hard....I am just not seeing the cuteness factor in Mr. Mole...perhaps I should send them to Whispering Acres to live :).

LOL, I have a mole issue as well. Only my dog tries to catch it and digs up the small patches of lawn the mole left behind. My yard always looks like the surface of the moon.

Talk about an animal perfectly engineered for his function in life! I've never seen one "in person", so I had no idea those digger feet were so impressive. I admire you for relocating!

LOL! But think of all the good work he's doing airing the soil, helping it to drain and gobbling up root munching grubs! OK so he's also eating earthworms but there are plenty to go around :o) I'm actually quite impressed with your humane method of removal! Might have to remember that one. Round my neck of the woods you see lines of them hanging on fences where the farmers have used the kebab type traps.

Oh my gosh, I didn't realize how ugly moles are! Thanks for the tip on how to relocate them. Nancy is right, their hands are amazing. And Claire is a stitch! IMO, the best thing about having mice in the barn is then I know I don't have rats.