Where does the time go? I suppose, since it has been over a month since my last post, it is about time to let the world know that I am still here.

I know it is only January, but this winter already seems as though it has been eternal. We have had to endure bitter cold, innumerable ice storms and just downright miserable conditions. I know, it's Iowa, get over it. It just really starts to wear on even the heartiest of souls after a while and has put me in a mid-winter funk.

This was our view out the living room window for most of last week.....not that there was anything to see since we have had no visible sun for 10 days! 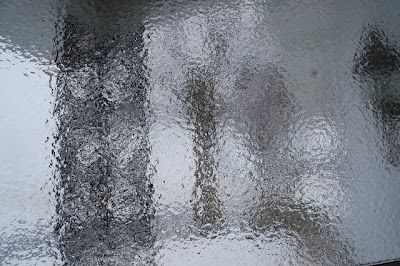 When our last ice storm hit Wednesday night, it left everything coated with a thick layer of ice,which, at our house translates into a power outage. We normally lose power maybe twice a year for an hour or two....except three years ago when we were without for 9 days...after which we did end up buying a generator, which, I begrudgingly admit, was quite a prudent decision on Gary's part (I am cheap  frugal and didn't want to spend the money), I digress. Wednesday the freezing rain just kept coming, building up on the powerlines until they could take no more and we finally lost our electricity, but because of my husband's forethought with the aforementioned generator, we did have a back-up plan for this situation. The power limped along, flickering overnight Wednesday and went completely out at 4:30 am on Thursday. Gary was going to hook up the generator before he left for work that morning, but I said, "No, it will be back on in two hours...that's what the automated-voice lady at the power company told me, I'll be fine until then".
By 11 o'clock it was 57 degrees in the house, I called the power company and was told (once again) by the automated voice lady....after going through a litany of, "did you say...? If you would like this call in English..." that the power would be back on in two hours....hmmmm. After watching the thermostat continue it's steady decline it was then that I realized that I would never make it as an Amish person. Everything that I hoped to accomplish that day required electicity. I was cold. I wanted hot chocolate. I wanted a shower. For those of you that don't live with well water- wells need electricity to pump water into the house so you even have to stratigically plan your water usage i.e. toilet flushing, teeth brushing, etc. 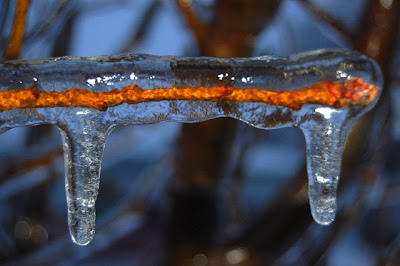 Since my hands were frozen, rendering me unable to work on my clay figurines, there was only one thing to do-grab a nice, warm blanket and round up some kitties to cover myself with.

I was ruthless, disregarding the fact that they were already all cozy in their napping places...Mama was cold! 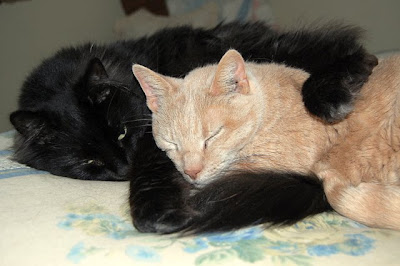 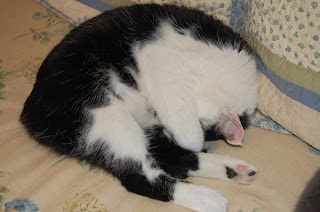 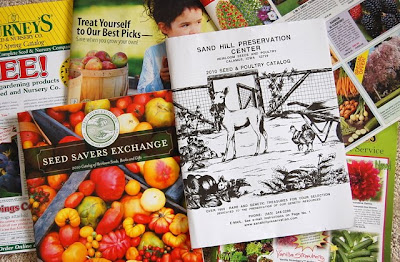 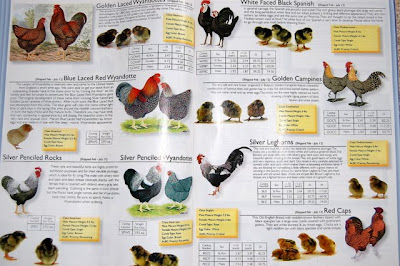 As nice as it was to have an excuse to do nothing but sit on the couch with some kitties, it was wonderful feel the heat flowing freely from the registers once again and to have circulation return to my fingers. Incidentally, the two hours that it was supposed to take for the power to come back on ended up being 17, whatever.

The animals outside were having their share of problems too, the grass became a sheet of ice and the sheep and horses barely came out of the barn for two days-not because it was cold, it was just too slippery. 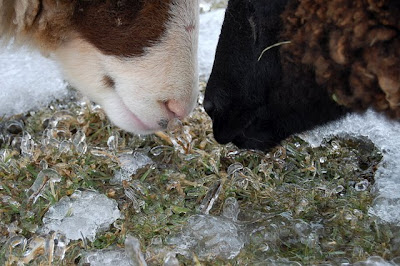 The sun is supposed to come out on Tuesday........we'll see. Spring has got to come soon!

I think Ande has been watching too many of those Twilight vampire movies this winter. 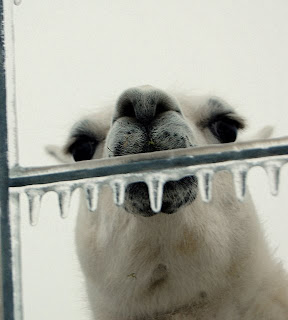 Footnote: I was initially going to title this post, "Garden Porn" but last time I posted something about my ewes and titled it, "Good Girls Gone Bad" I received dozens of comments written in Japanese that I couldn't read, so I clicked on the links hoping that it would take me to some new friend's lovely blog on the other side of the world, but instead, it took me to some really disgusting websites.......hence the reason for my changing the comment section so that it is now necessary to do the "word verification" in order to leave me a comment....sigh...the pitfalls of technology.

Life is just so much better when you post!

I've got the same feeling! But have been lucky with elect....but would love a day to sit on the couch! Keep warm and that Andy is so cute I think I could take him home with me!

Luckily, most of the ice missed us this time. I feel for you. Ice on top of every thing else is so much worse. I got an Arabic comment on one of my blogs that I declined to open. But I have always wondered what it said. Thanks for the tip. Now I'm glad I trashed it.

LOL, my DH calls the McMurry catalog the same thing! I'm addicted to it. You always crack me up.

We had some great times when our pipes froze up for about 4 days, it is amazing how much you find becomes a hassle when you can't get running water!

i LOVE your posts...i could spend an entire day with no power reading them :)

yes--i was feeling really down a week ago..i hope i turned the winter blues corner...but who i am kidding..it's only january!

i've got my sand hill preservation catalog at work...oh the possibilities :)

There is no better hot water bottle than a cat or three! I would love an excuse to curl up with my kitties.

I agree with Nancy K.! Your uncomfortable situation made for entertaining reading on a day when I needed it! And made me thankful for my only minor inconveniences! Glad you were able to make the best of it and send some humor our way besides! Love your kitties!

If only you had let Gary do that nifty generator hookup like we talked about... Cuz!

I can relate to your post. We live in North Central Washington, off the power grid and depend on the generator and solar panels. Once in a while the generator breaks down, and we use the backup generator. A few times BOTH generators have been broken and we are down to oil lamps, and candles. Fortunately we have a wood stove, which, I'd recommend for you for when the power is out.Wood heat is the best, plus you can cook on top of it if necessary. I,too, love to snuggle with the kitties.
Jackie
sheepmom.com

I'm so glad you're back! This is my first winter in Iowa and I still love it, but after the pre-Christmas blizzard I was stuck for several days. Fortunately, I have not lost power! Just the ability to go out. The town keeps the roads clear, but our apt. management is far away and they seem to forget we need to have our parking lot and sidewalks cleared of snow and ice.

Just have one cat to keep me warm, but when I settle in the recliner and put my fleece blanket over my legs, she comes running and curls up with me.