Several weeks ago I got a call from my brother, his next door neighbor, Jim, had passed away and since Jim's family lived out of town they asked my brother if they could hire him to clean out the house. They wanted him to throw everything into dumpsters and have it hauled away. Why would they do that, you may ask? Well, as it turns out, Jim was a bit of a hoarder ( a man after my own heart) and never threw anything away. As I have mentioned before in this blog, I come from a long line of dumpster-diving, junk-loving scavengers, so when my brother asked if I wanted to see if there was anything I could use before he threw it all out, of course I jumped on the opportunity. I searched through boxes, bags, stacks of items and found a few things that I could use around the house, then I came across a set of shelves that served as Jim's pantry. Being that Jim was a hoarder, some of the items that I found in the pantry had gone beyond their 'use by' dates, and even if they weren't I would not really be comfortable using any of it, but then something caught my eye-cans of pumpkin! 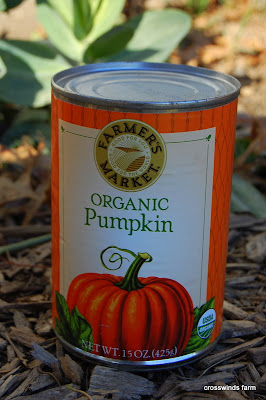 Those of you who have followed my blog for a long time may be amused by this, remembering my own pumpkin hoarding incident in 2008. But Jim had many more cans than the mere 60-something that I had purchased back then. Anyway, this stuff was still good and had an expiration date of 2012. I loaded cases and cases of pumpkin into the truck, knowing that this would be a wonderful treat for my chicken friends in the colder months. As an added bonus pumpkin is loaded with vitamins and Beta Carotene which helps the chickens make beautiful, bright egg yolks.
This morning I decided to start adding some of the pumpkin to their regular fare. Many of the girls are molting right now and I think the boost in vitamins will help them regrow feathers a bit faster in this cold weather.
Molting chickens = not so pretty. 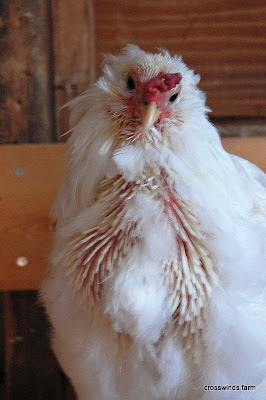 Everyone eagerly snacked into the delectable dessert.
Even some of my girls that are usually more refined and dignified made pigs of themselves. 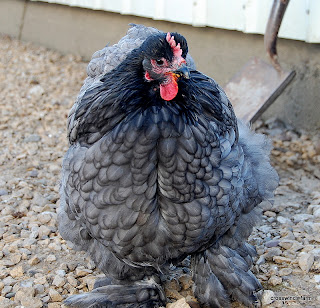 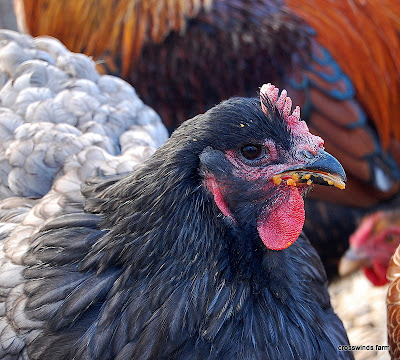 As did Gonzo the rooster. 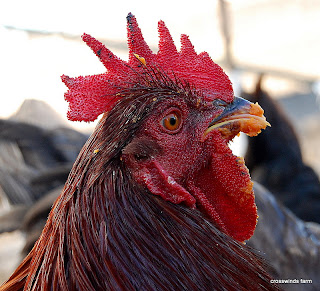 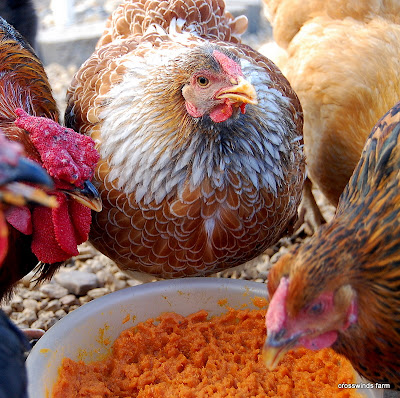 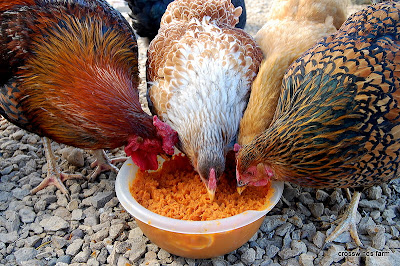 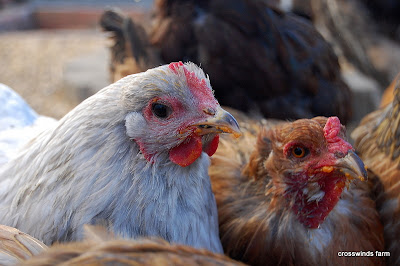 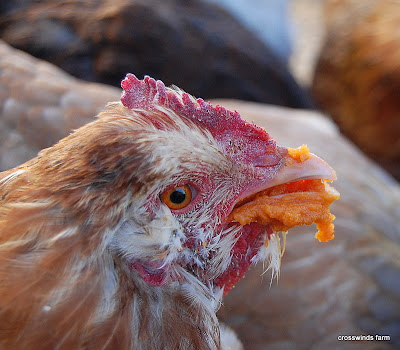 "I think I am over capacity, can someone help me out?" 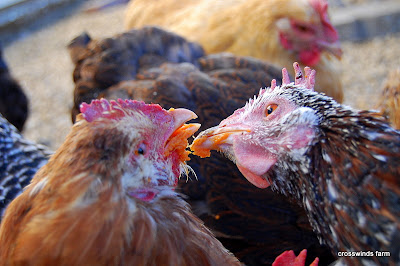 "Whew, thanks!"
In case you are wondering, my brother didn't throw everything away.....except for the thousands of cottage cheese containers that were literally stacked to the ceiling, most of the usable stuff was given away or donated to Good Will.
Posted by Crosswinds Farm at 11/06/2010 12:46:00 PM

I LOVE dumpster-diving, scrounging, and recycling - what a find! Your girls are very lucky!

I just fed some pumpkins to the goats and geese today. I have the insides of the pumpkin I just baked that will go to the chickens. Then I still have a bunch out in the garage to feed to them also. They just love that pumpkin! Glad you had such a great find.

What a lucky score! I just loaded up my Jeep, the other day. I saw a field, along the Interstate that had a bunch of pumpkins in it so I got on the service road and went back to it. I asked what they were going to do with the pumpkins (it was after Halloween) and they said "nothing" so I asked if I could have some. I brought home over forty (nice sized) pumpkins! They are now taking up every available shelf and counter space in the garage. The sheep get three a day and the chickens split one.

I could sure go for a pumpkin pie...

mmmmmmm! A very nice gift from a past friend! Lucky chickens.

I didn't realize pumpkin was so good for chickens..will they eat it uncooked? Like they do squash? :)

Bet your chickens would like pumpkin bars, er, at least I would! Just sayin'.

When I croak, I hope someone uses the usable canned goods in my house. I know it would probably make my family feel weird to use them, but better for the planet that it wasn't wasted.

I found the pumpkin link
http://crosswindsfarm.blogspot.com/2008_08_01_archive.html

That was an excellent deal.

So funny! I just love this post and love your blog. It's right down my alley. Can't wait to read more :)
Amy