Tuesday morning when I went out to feed the crew, I noticed that my best Blue-Laced Red Wyandotte roo was missing. He is...errr...he was..one of the three marauding roosters that I was keeping for breeding next spring. I don't know for sure what got him, the only clues that I found were a few of his beautiful, iridescent tail feathers on the ground in the horse's winter paddock. Very sad. I haven't had predator problems for quite some time and I have always been able to allow the three boys to free range, so this was very disheartening. Generally a fox or coyote will leave tell-tale signs of a struggle, but there was nothing. I have to assume that perhaps a very large bird of prey may have been at work here. I guess it doesn't matter now. I moved the remaining boys into one of the barns for their safety, but it will take some getting used to for Rooster Cogburn who has never been confined in the almost 5 years that I have had him. The irony of this situation is that I have several roos that I am trying to get rid of.....OK, so not necessarily in this way, but my point is that it's always the good ones that turn up missing  : (.
Good-bye handsome Blue-ster. 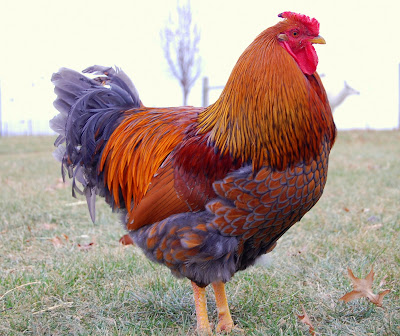 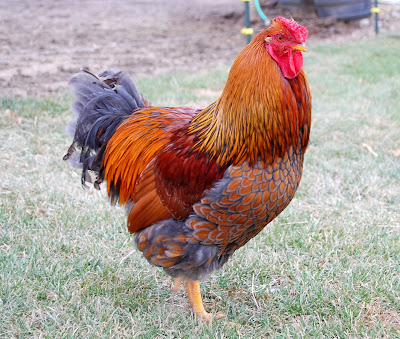 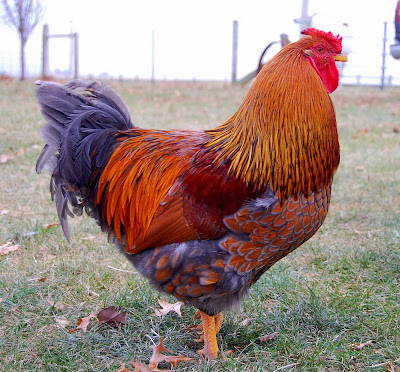 In happier chicken news, I was out collecting eggs and discovered that my French Black Copper Maran pullet has just start laying! You may remember the Maran chicks from an earlier post. Unfortunately, out of the four original chicks, only ONE turned out to be a pullet. 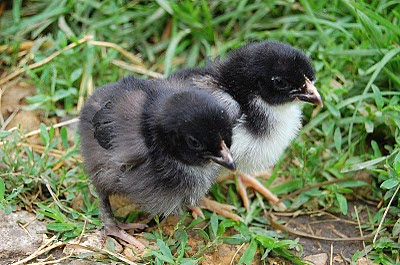 Look how pretty her dark eggs are compared to my other hens' eggs. 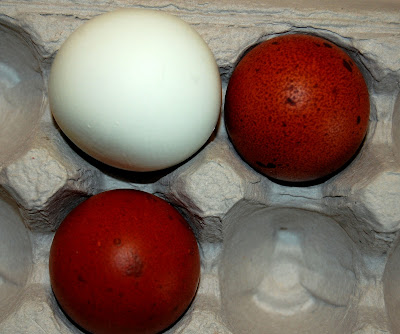 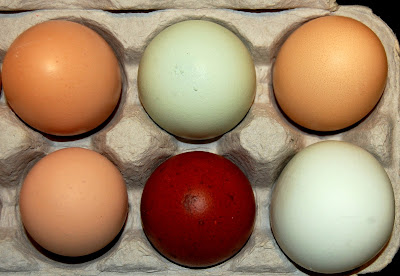 The rest of the hens have really been slacking on the job. We are down to about a dozen, or a dozen and a half eggs a day. You may think that sounds like a lot, but remember, I have 60 (ish) hens...I think...somewhere in that ballpark (ish)..Chicken Math, you know. That is OK though, they deserve a rest, they supplied plenty of eggs all season long for Farmers' Market.
For those of you that are wondering if there is a difference between farm eggs and store eggs-beside the pretty colored shells and lack of salmonella recalls- they are pretty on the inside too. 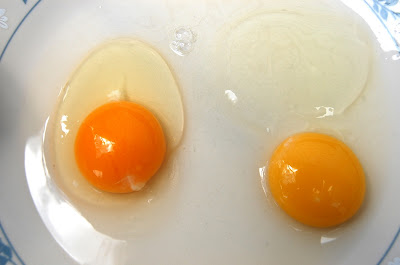 Email ThisBlogThis!Share to TwitterShare to FacebookShare to Pinterest
Labels: roosters

So sorry to hear about your rooster. I have a free-range rooster that I wouldn't get upset if something ate him, but he's doing quite well. Love the picture of the insides of the two eggs.

Awwwwww! I'm sorry to hear about your BLRW rooster! I know what you mean about it always being the best ones.

My cochin hens are laying like CRAZY. I've only got 15 hens and I'm getting 6 to 8 eggs a day. Somebody forgot to tell them to slack off in the winter. I may just have to fire up a bator...

I'm so sorry about that gorgeous rooster - I never knew chickens came in such wonderful colors and patterns until I started following some farm blogs. Yours are exquisite! And I can't believe the deep reddish eggs aren't dyed!!!

Oh no, he was quite the looker. I know what you mean about loosing the best ones. Never fails.

Sorry about your roo Corinne......And he is one of my favorite breeds, what a beauty!
Love the egg comparison at the bottom of your blog. Nothing that the store has on it's shelf can compare to fresh, farm raised eggs.

I'm so sorry about your rooster. He was so beautiful...

By the way, I saw a fox nab a squirrel on my deck and race away like the wind (with me running along yelling behind him, I am not always in tune with Mother Nature's survival of the fittest), leaving no trace behind. I know a rooster is bigger, but I think maybe a coyote could have done this.

Sorry to hear about your rooster, his colors were beautiful, hope you saved the feathers.

oh im so sorry! i really dislike carnivores.i try to pretend the food chain doesnt exist. what a handsome bird, all your animals are so healthy and beautiful.

aw, rip blue-ster
i'm always so sad if we lose someone
you are right...it's always the ones you want to stay around too

on a happier note--those eggs are BEAUTIFUL!!

we are getting no eggs from our chickens
i don't know what the deal is
been weeks
can't be molting still??
don't know if they are laying them somewhere secret
or if the dogs are eating them all??
i'm having my husband pick up store eggs tonight
uck!
i'm an egg snob now

That's a bummer. How are those BLRW's for layers? I used to run SL, Columbian and Whites free-range for eggs and loved them.

I have about 35 hens and this week it was 1 egg one day, zero the next, two today... I usually have no less than 4 dozen on hand. I currently have 7 eggs. Makes holiday baking a bit difficult. I can't stand the thought of shoveling out all this feed and still having to buy yucky grocery store eggs. Grrr!

He was so beautiful! I fell in love with roosters by accident. We brought home a hen named Blackness. The s-he started to test out his voice. We changed his named him Kevin after the bird in the movie "Up". Living with close neighbors we had to find him a new home. I still mourn him. Sorry for your loss.

He was beautiful! So sorry. I fell in love with roosters by accident. We brought home a hen named Blackness. Then s-he started testing out his voice! We renamed him Kevin after the bird in the movie "Up". With close neighbors we found a farm for him to live on. I still miss him. Sorry for your loss.