Fun with Japanese Beetles! Caution, this doesn't end well for the beetles

Well, I have no excuse for my long absence from my blog. The summer is flying by and there have been a number  of things that I could have blogged about, but time just seems to slip away so quickly. I vow to be a better blogger....or, that is to say, I will blog more often...it won't be any better 'cause I am still the one that is writing it, there will just be more of.....well, whatever this is.

Recently our farm has been invaded by Popillia Japonica-no, this is not some hip, new rock band-we are talking Japanese Beetles here. 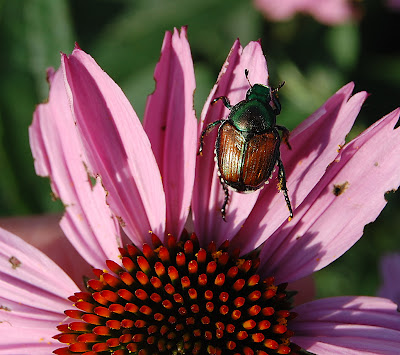 At first, there were just a few of them munching on some of my flowers, which was not much more than an annoyance.

Then they brought their friends- along with their voracious appetites.. 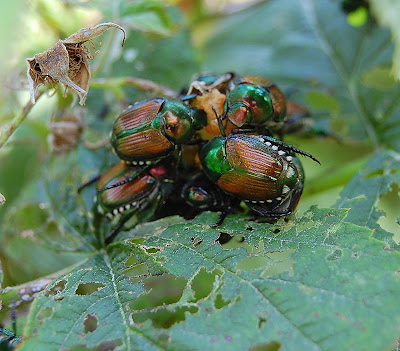 Then they started dining on some of my fruit trees. 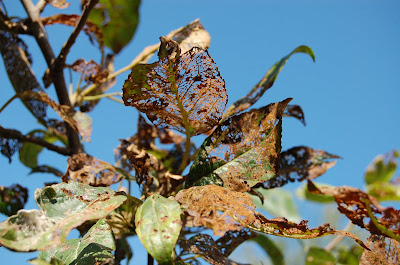 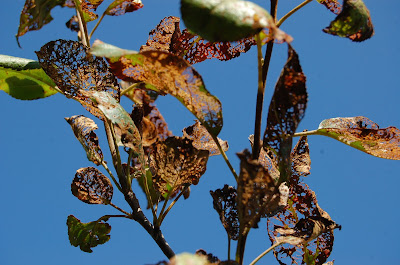 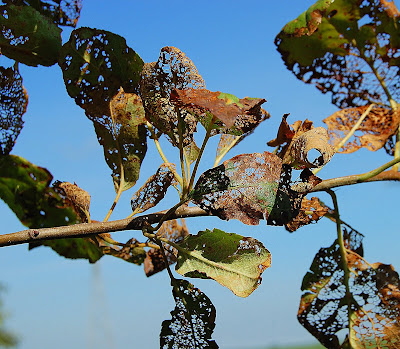 Something had to be done, and since I really try not to use any insecticides on the property, I had to get creative.
In past years, I have gathered up some of  shiny little insect-offenders and thrown the mercilessly into the chicken run, to be gobbled up by my hungry flock. It was pretty much a win-win situation.....unless you were a beetle.
Hard-shelled beetles provide extra phosphorous and calcium - not to mention lots of protein for the chickens- which means happy chickens, less feed for me to buy, and, as an added bonus, by keeping the number of beetles down , my plants looked less like Grandma's lace doilies. But, collecting the evil little creepy-crawlies was a bit time consuming- as well as a bit disgusting when they decided to fly into my hair, so I needed a new, improved method of revenge.
I considered placing one of those Japanese Beetle traps in the chicken's run, but I didn't really want all the beetles to land inside a trap where the chickens couldn't get to them, so I improvised -as I sometimes do.
I bought the bait that is intended to go into the trap - apparently it is scented with beetle pheromone and the beetles are lured into thinking that they are on their way to some sort of  insect swinger's party, when, in reality, the only date that they will be having is with their maker. 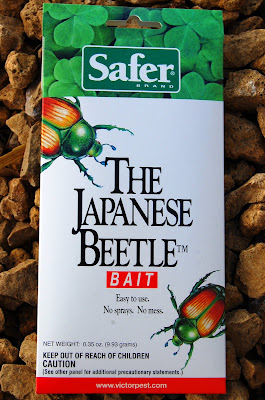 I tried to think of a way to expose the bait, while ensuring that the chickens couldn't get to it. The bait is supposedly non-toxic -  the beetles are only lured by the scent and then are captured in the trap, but I still didn't want to take any chances. I had a few ideas to keep the chickens safe from the bait, but some of them were not very practical. At times like these I go to our junk- garage and take inventory of all the useless stuff that we have been hanging onto "just in case we need it".
I found a couple of old vent covers...hmmmmm...one of these could work. 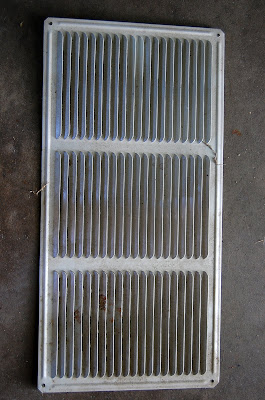 The back had wire mesh, so there was no way for the chickens to get through it. 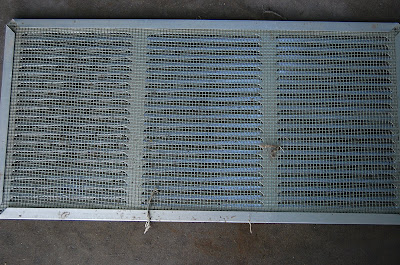 I found a board to attach my new-fangled trap to. 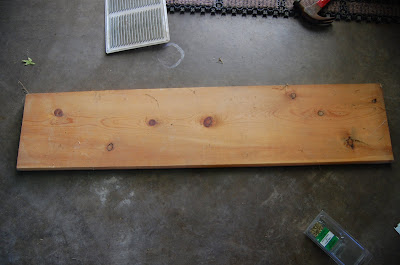 Opened the bait and secured it to the board. 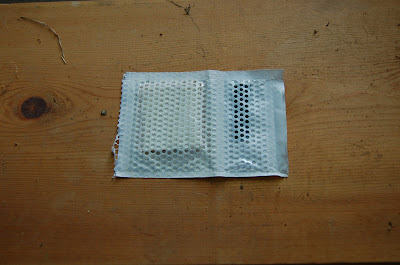 Covered the bait with the vent cover. 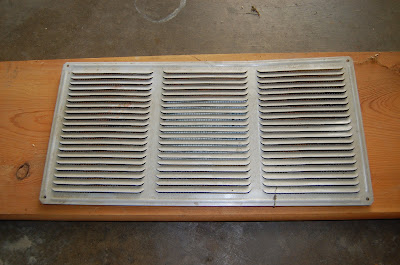 And then nailed it into place...OK, so I am no Bob Vila, but I got the job done. 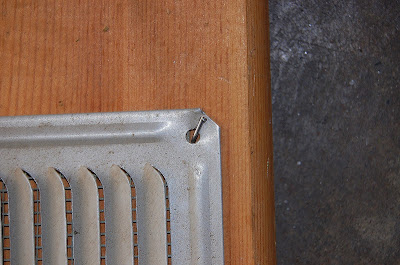 I almost forgot to mention that you will need a good supervisor for this project. 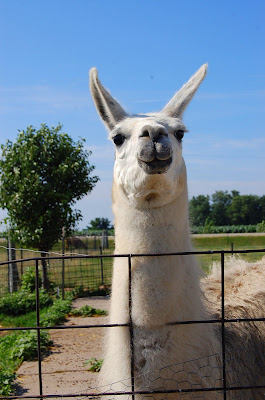 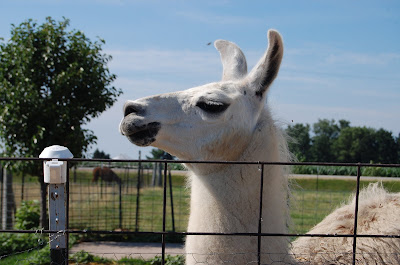 I then selected a spot in the chicken run to place my new chicken feeder, and waited for the fun to begin.

Are you wondering why you only see a few chickens in the video when you know that, in actuality, I have....well....a lot of chickens? It has been obscenely hot here and most of the girls were seeking shade at this time of day. One of the older Barred Rock girls, however, was particularly persistent!
Is this going to solve the problem? No, but it will give me a little satisfaction knowing that there are a few less beetles eating my yard!
Posted by Crosswinds Farm at 7/15/2011 07:11:00 PM

Excellent idea!!!! I was doing the water in the can thing too. gross. I am def doing this! Thanks for sharing! 8^)

What an absolutely brilliant idea!!! I may have to try this. Thanks for sharing.
Judy

I had no idea chickens were that good at catching bugs on the fly, so to speak.

That is AWESOME!!!
You should patent that and sell them. I bed you'd sell out at the farmer's markets! That barred rock hen is going to end up fat! Even if she never lays another egg, she's earning her keep!

P.S. what's with your Japanese beetles? They're way too early! Around here they don't show up en-force until the soybean fields are harvested. Then it's "don't even think about opening a door!"

What a clever idea! And the supervisor---did he approve??
:)

Everyone should have some chickens for their beetles.

Great idea. I'm with Nancy, the darn things are way early but I am grateful that you had to figure it out so early. They come in greater numbers every year and I have been trying to figure out a good, organic idea, now?....I'll be ready.

You are a genius!!! Bob Vila has got nothing on you girl. BTW-Thor is doing great, you'd never know he just arrived, he fits right in around here.

What a great solution! A non-toxic insecticide and free chicken food to boot.

With a supervisor like that how could you go wrong. I also agree with the above poster, that barred rock has earned her keep. She is out there panting in the heat killing beetles like a crazy hen. No soup pot for her I say!!!
Great idea!!!

That's pretty clever! The chickens get delivery instead of take-out!!!

GENIUS!! i have plenty of beetles, now I just need a few chickens ;)