A tale of two Cucurbits and other scary garden stuff.

Every year I start planning out my gardens in January when all the colorful, attractive seed catalogs start to arrive. Every year I swear that this will be the year I have a magnificent garden, this will be the year that my garden stays weed-free and I will have the most beautiful vegetables in all the land. I say that in January. The sad reality is, every year I start out with a lovely, well-tended garden...and then life happens, or, Mother Nature happens. For the past three years, spring has started with obscene amounts of rain, followed by dry, dry, dry summers....great for growing weeds...not so much for vegetables.

The most troublesome crops for me to grow have always been pumpkins and squash. I have no trouble planting the seeds and getting them to sprout out of their nice little hills, lovingly constructed of composted manure and rich garden soil. I water them as their vines take over the garden, the yard, the pasture. I watch as they flower and start to set fruit. Inevitably though, the Vine-Borers arrive, and they bring their friends the Stink Bugs, feasting on the plants until vines begin to wither and die. Once the bugs start, the damage is done, and I have wasted a huge portion of my garden space with nothing to show for it. Last year I was able to baby along a few measly Pumpkins and some wonky little acorn squash to maturity, but upon cutting them open, I found that they were mealy and mushy inside. All of my efforts ended up in the compost pile. That was it! No more growing of anything in the Curcubit family for me! Too much space lost, too much time, work and effort. I was done!

This year I only planted crops that were more manageable, more cooperative and less...well, buggy. I envisioned a pristine garden with immaculate rows of glorious vegetables and perfectly tilled walkways......yeah, I can envision all I want, but that didn't happen. With the now all-too-familiar rain/drought scenario of the previous summers, my garden went the way of gardens past and reverted to it's, ummm, it's more natural state. The good news is, if anyone is in need of Pigweed, Cockleburs, Water hemp or Lambs Quarters I can totally hook you up.

Yes, I had pretty much thrown in the proverbial towel on my garden.
Then, one day I happened to pass by the compost pile and saw an enormous vine snaking it's way across the pile, winding through the manure and straw . I took a closer look and noticed the familiar leaves of a squash or pumpkin. It apparently sprouted out of the remnants of the composted vine-crop disaster of last year. I chuckled and thought to myself, those will never grow, I can't get them to grow even when I plant them on purpose! I left them, certain that they would meet their demise once the insect population was in full-swing. Well, they didn't. They kept growing, and growing, and growing. They laughed at the insects. They soon overtook the Asparagus bed. 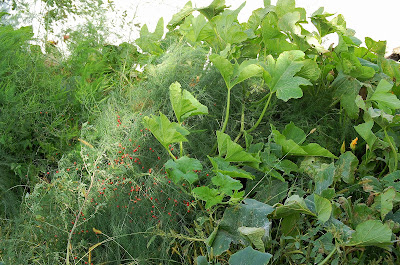 Not only did the vines grow, but they began to set fruit. 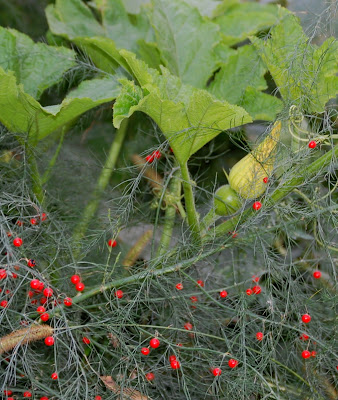 They took over fences. 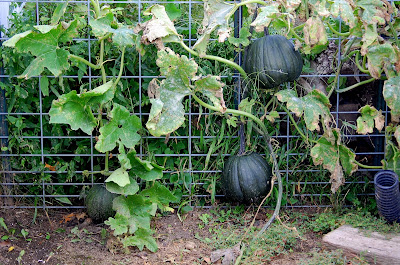 And they claimed the wood pile. 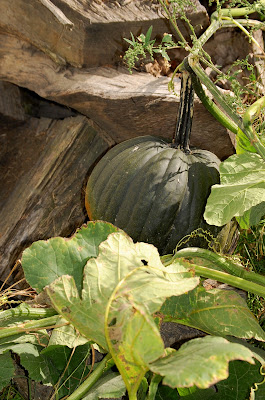 They grew right into the raspberry patch. 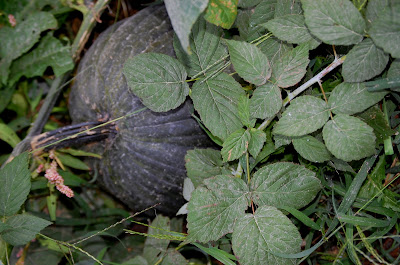 As the fruit matured, and after we had a little rain to wash it off, it occurred to me that they really didn't look like the same variety of pumpkins that I had thrown in the pile last fall, they are much, much darker and the creases are deeper. I am thinking that there was cross-pollination last year between the Acorn Squash and Pumpkins and the resulting seeds that sprouted are hybrids.....Squmpkins, if you will. 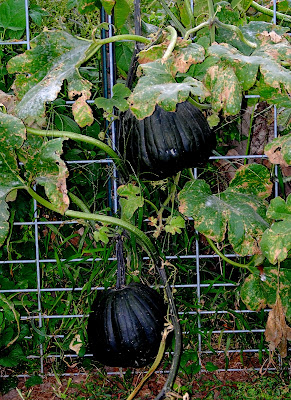 It's a good thing that other vine crops can't cross pollinate like squashes and pumpkins can because then we could be looking at a crop of Squattermellon, or Zuccumbers- that would just be wrong.
I have yet to cut one open to see what the innards look like....I will keep you posted..I know this is all so riveting!
My other garden misadventures involve my Sweet Potatoes. The vines were fabulous, but when it came time to dig them up, I felt more like I was performing an autopsy than gardening.
Because we had so little rain this summer, the ground was hard, and dry, and didn't allow the roots to spread out to form nice, long, plump taters....
Instead I got what looked like intestines. 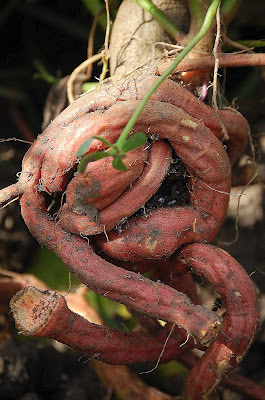 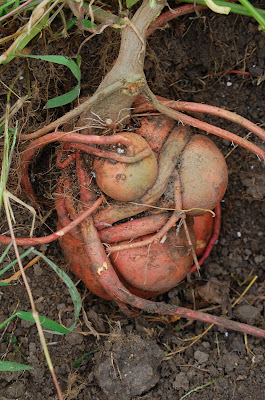 OK, so maybe I have a vivid imagination.
I did find a couple of decent-looking Sweet Potatoes.....unfortunately someone else found them first. Darn varmints! 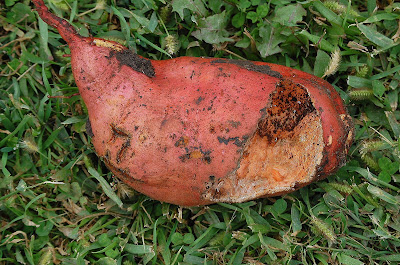 That's it! I'm done! I am pretty sure that I will soon be fencing off the area where my big garden is and adding that space to the ram pasture. I have discovered in my old age that, contrary to what I have always believed, I can't do everything...or at least I can't do everything well. I still have a smaller garden area that is closer to the house, and it is still more than adequately sized to keep our pantry stocked through the winter. I'm not giving up completely, I am just giving myself a break.
I can't wait until the seed catalogs start coming! Did I just say that?
Posted by Crosswinds Farm at 9/23/2011 07:00:00 PM

Oh, Corinne, you made me laugh out loud! Thanks for a great sense of humor, amid the veggie carnage.

I must share your vivid imagination, because those look like intestines and a heart to me, too! And those "black pumpkins" are fascinating! You'd better keep some seeds, because you might have stumbled into a wonderful new hybrid. Can't wait to see what they look like and taste like. My money's on a tasty winter squash, but even if I'm wrong, I wonder if the sheep would eat them.

I totally see the intestines and heart! And I LOVE the pumpkins!! I wonder if they will stay that dark colored.
And I feel your garden pain- I've also got a great crop of lambsquarters and pigweed with a side of velvet leaf thrown in.
Next year.....
Judy

I laughed all the way through this post.... the ONLY time we ever had decent pumpkins was the year they grew out of our old compost heap... I cut around them all summer, and we had wonderful pumpkins, enough to give away a whole load! Never have we been able to grow them since, and OUR GARDEN LOOKS LIKE YOURS. There! I admit it!

Ahh! You crack me up! I thought I was the only one with big gardening dreams that fizzled out. I have not, however, performed surgery when digging potatoes. ;)

I'm looking forward to reading about how the Squmpkins turn out :-) They look amazing.

I have not been able to grow potatoes in my garden here, but they grow like gangbusters from the ones I threw into the compost pile.

I had a success disaster with Waltham butternut squash this year. As with cantaloupe, I do nothing with them after I plant them except throw some fertilizer on them a couple of times early on. No hills, they just roam. Maybe you are coddling yours too much?

I'm glad to see someone else's garden gets overrun with weeds like mine, though.

Well, thank goodness someone else has funky looking cross bred "thingys".
I feed pumpkins to the sheep, so I had some volunteer "thingys" come up this year. At first I thought they were summer quash, then I thought, NO, those are zucchini, then I thought no, those are pumpkins.....turns out, I had all 3!!!
My sheep devoured them before they were completely ripe. There were 2 varieties, a summer squash that had a zucchini skin and a pumpkin that never got orange. Maybe we are just too close to nuclear plants.

lol
love your adventures
everything is interesting with you

very cook about the cross-breed squash
can't wait to see what you do with them
i too have never been able to intentionally grow the squash family...but they do great where we dump them over the fence from the year before!
sweet potatoes were a little scary :)

The best pumpkins we ever had grew from the seeds of a ratty old pumpkin that totally disintegrated on the porch one fall. The seeds fell down between the planks, grew into the most lush and happy plant (that took over the front yard) and made perfect pumpkins. Can't wait to hear what your squmpkins turn out to be like on the inside.

You need Guineas to get rid of all those nasty bugs for you :)

What type of pumpkins were the acorn squash crossed with?