Cinnamon is one of our barn cats, he is extremely sweet and loves everyone...almost. Yesterday he decided to get acquainted with Ande (or as we have gotten accustomed to calling him, Ande's Candies.....don't ask) and they seem to have a mutual distrust of each other 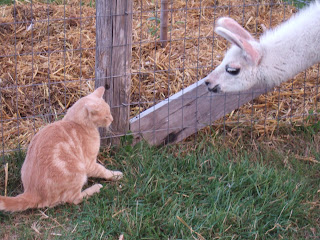 
Their little encounter did make for moderately amusing entertainment though.
Ande would cautiously approach, stretching his neck (as if he NEEDS to) to try to touch noses while maintaining a safe get away distance. Cinnamon would respond by plastering his ears against his head while uttering sounds that conjure up images of the bowels of Hell. After which, a reluctant touching of noses would occur. 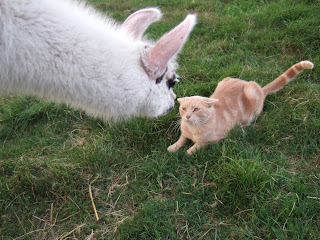 The nose-touching was some kind of cue for Ande to turn and make a mad dash around the small front pasture, kicking out at invisible pasture gnomes as he ran. 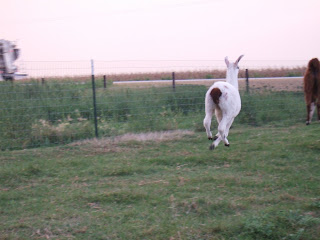 Only to come trotting back to start the game over again. 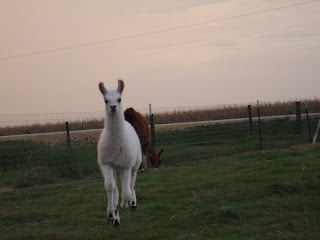 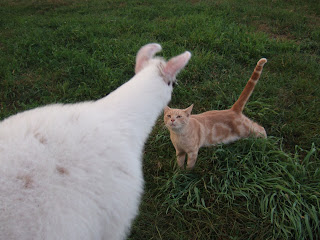 Cinnamon is the friendliest of our barn cats. He usually waits at the back door every morning for me to come out and do chores and then accompanies me on each task, only stopping for the morning treat of canned cat food. This morning he was not waiting for me at the back door, our barn cats are pretty predictable and when one of them is absent from their usual routine, I always get very worried. After calling for him, filling the cat food bowl, and all of the usual enticements didn't coax him into the barn, I was deeply concerned. Then after one more check of the horse barn, I saw him resting on top of some bales of hay. Something was wrong. I tried to pick him up and he hissed at me, he seemed lethargic and in pain. I felt for injuries, there was no blood, no wounds, but as I looked more closely I noticed grease behind an ear and a little "road rash" on his hind end, he had been hit by a car. I gathered him up and rushed him over to our vet's office. The vet asked me to leave him there for evaluation and observation and said that they would call me and let me know what they found. After a couple of hours they called back and luckily there were no broken bones and no apparent internal injuries, just soft tissue damage....he is going to be okay.

I told my husband when we got barn cats, "Try not get too attached to them, things happen to barn cats". Perhaps I should follow my own advice. I really don't like the idea of outside cats for that reason, I do get attached, and things sometimes do happen to them. That is the hardest part of farm life, there are all these little lives that can bring so much joy, but they can also cause so much worry and heartache when things happen to them.Unfortunately, we need the cats outside in the barns. We do our best to take care of them, they are spayed/neutered, have all of their shots, get dewormed, flea control, fed daily, heated water in the winter. I guess, compared to a lot of pets, they have a pretty good life. I just wish they would not make me worry so much!

He is NOT just a barn cat!!! What an awful thing to suggest!!

Ok ok, I know, he is just a barn cat, but no one told him that. No one sent him the memo that said 'act uninterested, aloof, and unaffectionate'. Maybe you should tell HIM he's just a barn cat? (and on a side note...my favorite)

I'm sorry I missed their 'courtship'. It sounds as though neither was using their best judgement! ;)