As the sun was rising this morning, I caught a glimpse of these pretty little "Sun dogs". The sun was rising just south and east ( er, to your right) of these pictures, and there was another "Sun dog" on the other side, but not nearly as impressive. I wish the lense could capture the colors more accurately. 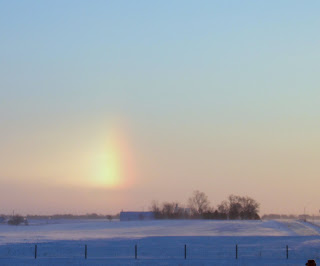 Tomorrow after the winds subside, I will have to shovel along the boy's fence. The drifting snow has piled up along their enclosure, and if they were smart enough (not so lazy), they could walk right over. They wouldn't get too far though, thankfully there is a perimeter fence that would keep them on the property. 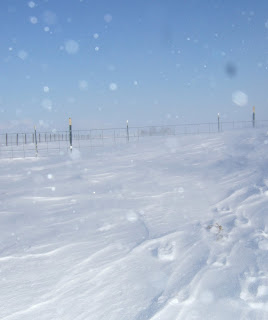 We won't warm up here until May or June. When I worked at the Arbotetum here, I remember having plant sales in June and July with 6" of snow on the ground! I wish we lived where it warmed in March and you were planting the garden in April. (sigh) Maybe when my DH retires...it's either the Pacific NW or back to the Midwest for us!
(Great photos! I haven't seen a "Sun Dog" in years here!)

Awesome photots - Sundogs are cool, but I love your sheep. I'm Sue Piatak's sister from St. Louis. (We've about had enough of winter here in the Lou too.)Sue and Steve speak about you often. I'm an artist and recreational knitter so when I see sheep I think 'socks'. Love your blog and plan on checking back often.

Kathy, I have a brother-in-law that lives in Chandler Az. so I always seem to forget that some parts of the state aren't 100 degrees all the time!

Smom, Thanks for stopping by. I checked out your blog too, lots of neat childhood memories. Blog on!