I got nothin'.
There is NOTHING new or exciting happening.
Everyone is posting cute lambie pictures and I have serious lamb envy. I have at least another month and a half before my girls start to pop, so I am having to live vicariously through the other sheepie blogs for now.

In doggy news, Emma is having a separation anxiety emergency.
Normally one does not see Miss Emma without her blue 'jolly ball'..ever. It has almost become an extension of her face.... something you might see on the Discovery health channel. She has been attached to it since she was a puppy and carries it absolutely everywhere. If she hears a car pull in the drive, she makes a feeble attempt to sound like a vicious farm dog and then picks up her ball hoping that whomever has arrived will be happy to toss the blue ball with all of it's slimy goodness for her. Because of the aforementioned slimy goodness, we don't allow her to bring that ball in the house (Don't feel too sorry, she has some other 'house balls' that she can carry around).
It seems as though one of the last times we had storm that dumped copious amounts of snow, Emma's beloved ball was entombed in a drift somewhere and has not been seen since. She runs out back every morning, circling and searching in desperation, reminiscent of Tom Hanks yelling, "Wiiilllson" (if you haven't seen Cast Away, you are very confused right now).

Anywhoo, we have only one snow drift behind the horse barn left to melt, and the ditch on the west side of the property still has about 3 feet of snow.....but if neither of those yield a well preserved blue jolly ball, I have made a promise that I will be making a trip to Farm and Fleet. 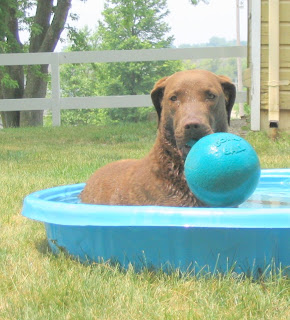 Wow, believe it or not, that's all the news that's fit to print. Don't despair my friends, baby chicks will arrive the first week in April, lambs possibly by the end of April, and then I will have more blog fodder than I know what to do with.

Email ThisBlogThis!Share to TwitterShare to FacebookShare to Pinterest
Labels: Dogs

For those who don't already know, Emma is the good dog.