Hooray! Daylight saving time. No really, I get very excited about this. I don't care that we "lost" an hour of sleep, that's what winter is for.. sleeping. I find it so depressing, in the dead of winter, when I wake up in the morning and it's dark, then by 4 o'clock in the afternoon it is dark again. When daylight saving time arrives I know that we have turned the corner and there is light (pun intended) at the end of the tunnel.

Even the temperatures are getting a bit more spring-like. It was in the mid 30's today, which actually felt wonderful, and by Wednesday it is forecast to be 56 with rain. Bring it on, let's see some grass grow.
These robins were in my yard a few days ago, so I guess it's official, warmer weather is on it's way. 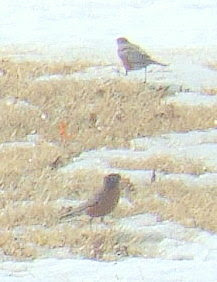 Sunday I decided to rope my sister, Marie, into helping me get Rocky and his posse organized. And by organized I mean; hooves trimmed, CDT shots, and dewormed. Strangely, Marie is always a willing volunteer...silly girl, you'd think that she would learn. She had the enviable (ha) task of holding on to said rams/wethers while I administered vaccinations and manny peddy treatments....let's just say that it is a good thing that there are only 6 of the boys. Normally we do all of the health updating at the time of shearing, but I thought it might be easier to get some of it out of the way beforehand this year.

The rams are much more forgiving than the ewes. After all that poking and prodding, you would think that the boys wouldn't want anything to do with us, but after we release them, they come right back for more abuse. I suppose they think any attention is better than none. If I man-handled the ewes now, I would have a very difficult time catching them up again for my shearer. They are ridiculously friendly, but they are also very smart and can tell when something is up, so it is easier to catch them once and get it all done. I will only have to do CDT and deworming on the girls, they have a bit of concrete around their barn that wears down their hooves, so I almost never have to trim them.

Once we got finished with the rams I made Marie "skate" on my pretend pond too. Those of you who know Marie are aware that in actuality I didn't have to make her slide foolishly around on my pasture, she is perhaps kookier than I am and is always a willing participant in any kind of offbeat activity, so no encouragement was needed. The fluffy (chubby) black bum that you see to her right is not one of my sheep, that is Marie's Australian Shepherd "Abbey". Abbey went to the vet last week... she was 75 lbs....Abbey is on a diet...Marie still insists that she's just fluffy....you be the judge. 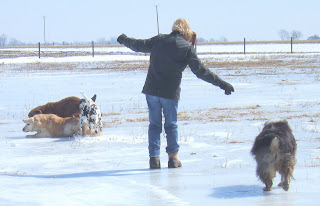 On a side note, for some reason my google frappr map at the bottom of my blog page has been randomly erasing people's pins. I hope that they fix it soon, I like to see where everyone is from! I am very happy though that Blogger has finally fixed my spell check..... now if only they had a grammar and punctuation check..........
Posted by Crosswinds Farm at 3/09/2008 07:20:00 PM

fluffy...right, fluffy. 75lbs of FUR. Why I bet she looks like a drowned rat when she swims. mhmm...