These photos may help illustrate why I am having difficulty deciding which of my moorit (brown) ewe lambs are staying. All three girls have very nice conformation, crimpy, soft fleece and good Shetland tails and all three are VERY friendly. The ewe lamb in the front, Aleena, I am keeping. She has perhaps the crimpiest fleece of the three, and her dam (Sommarang Daisy) is one of my favorite ewes with very nice flecket markings and great fleece. Aleena carries the spotting genes that I am trying to keep in my flock.

Briannah, in the center, I have for sale on my website....BUT......she is such a nice little ewe, also carries spotting genetics from her dam (Sheepy Hollow Red Trillium). I wouldn't be too disappointed if I didn't sell her, in fact, I haven't been trying very hard at all to sell any of them, they are just too nice this year. 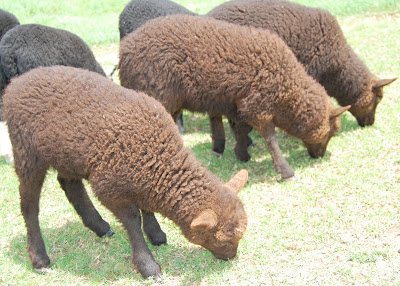 The last ewe lamb is Guinivere. She is out of my ewe Sheepy Hollow Lovey. I would say that she is more of a dark brown than moorit at this point, she has a "moon spot" on one of her ears. She also is an exceptional ewe lamb, her tail is a tad longer than the other girls, but still acceptable.

Three brown girls, all born with minor krunet markings, all have great fleece and conformation....what is a shepherd to do? Perhaps buy more land? 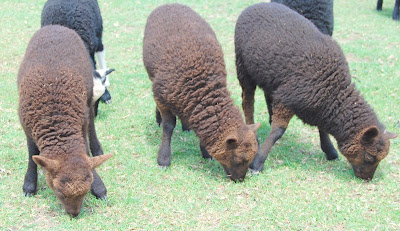 Other stuff around the farm today.
I have a pair of barn swallows that has been trying, with very limited success, to build a nest in the sheep barn. Normally these industrious little feathered creatures are veritable architectural geniuses. They gather mud and affix it to a vertical surface to construct a sturdy little nest lined with soft treasures gathered from the farm in which to lay their eggs.... Normally.
This pair must be inexperienced youngsters. I have watched them try, for the last couple of weeks, to make an acceptable home in which to raise their brood, and I have been almost embarrassed for them. The first several attempts left these remnants of mud on the highest point of this truss. They spent the day collecting mud and attaching it to the boards, only to have it slide off.... 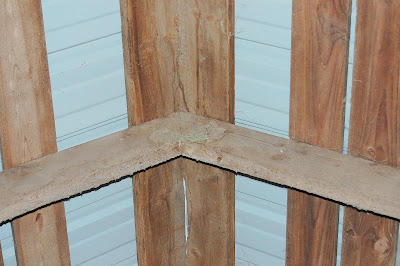 And land on the beam below. 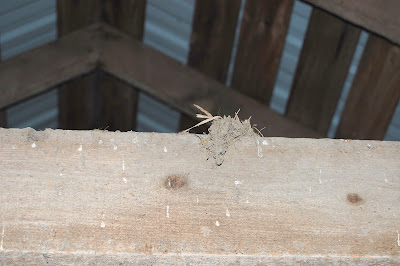 If this happened once, okay, but this went on for several days, different locations, but the same sad results. In their defense, I must say that it has done nothing but rain here for an eternity, so the quality of the mud was probably less than desirable.

Finally, they found a spot....alright, they cheated a little. There really was no way for the mud to fall out once wedged in this crevice. After several days of hard work, the task was complete. Today I decided to take a peek inside to see if their efforts were fruitful. I was delighted to find 5 dainty, speckled, eggs, all in a cozy nest, that, to my surprise, was lined with feathers from the hen that we lost the other day. Isn't it interesting how life just circles around? 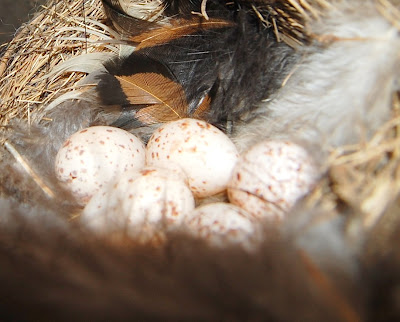 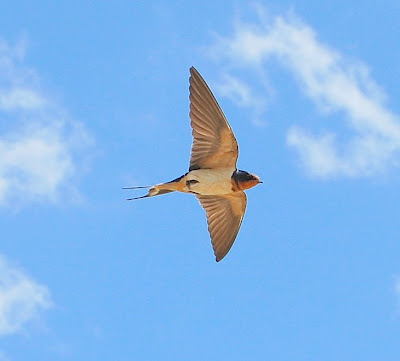 Such a Problem to have with three lovely, moorit ewe lambs!

As for the swallows nesting...
VERY cool!!!

Those swallows sure made a beautiful nest in the end! And you're right, hard choosing between girls...just keep 'em all! ;-)

I enjoyed the story of the swallows. Who needs t.v., right? Your pictures are as lovely as ever and it would be hard choosing between those three beautiful lambs.
Tammy

You guys are NO help with lamb decisions! Rayna, I am trying VERY hard NOT to keep them all :).
Tammy, you are right about not needing T.V., I think t.v. was invented for people who don't have animals around.