Well, I have almost recovered from my weekend at Jefferson. What a great time, seeing old friends and a meeting a few new ones, and talking sheepy stuff all weekend. It is always fun to see all the different breeds of sheep too. First the sheep.

I have no idea what this one is...but I am pretty sure that it is a Hampshire, Labradoodle cross. 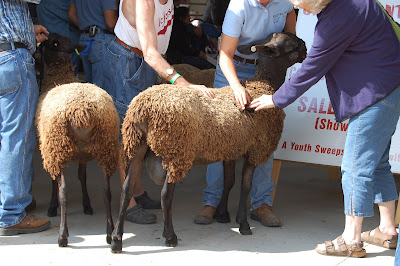 Whoa, I have enough trouble with rams with two horns...this Jacob ram would not be my cup of tea. 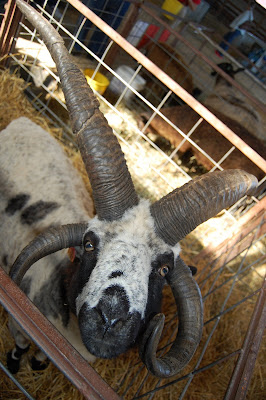 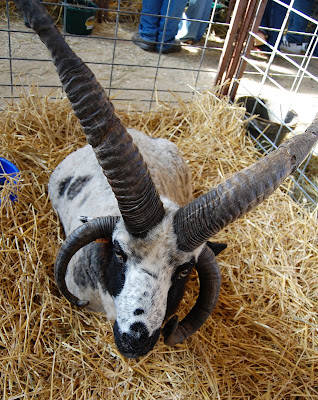 Conjoined Shetland ram lambs...okay, I'm lying again, they were just cuddled up together. 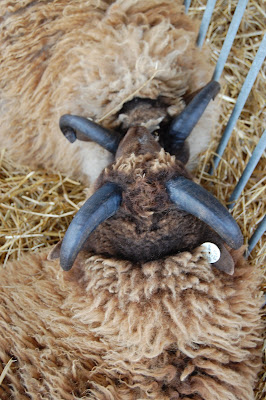 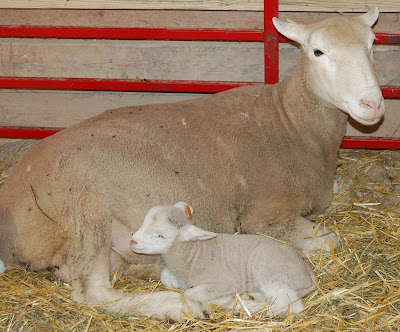 Now for the friends.

Marie and I headed out to Jefferson as soon as Marie got off work at 4 o'clock on Friday, the trip isn't bad (about 3 hours), so with GPS plugged in and ready, a ewe and a rooster tucked away in the back of the truck, we made our way to Wisconsin with nary a wrong turn...although the GPS lady (later dubbed Garmina), did try a couple of times to get us to drive off a cliff....surprisingly, she is not the first to make that suggestion to us. We arrived safe and sound around seven, unloaded sheep and delivered Mr. rooster to his new owner, my friend, Lori. We then waited for our adopted sister Nancy k. to arrive since we were sharing a hotel room with her, and knew that she would need help unloading sheep. Well, here's the thing, Nancy had a little trouble getting to Jefferson and didn't arrive until, ohhhh, sometime around 10 pm. By the time we got unloaded and tried to find our way to the hotel through all the detours (Garmina doesn't know about detours), I think it was somewhere around 11 pm. I must apologise to all who had a room near ours....or on the same floor.....or in the same hotel for that matter. We were, well, kind of loud. There was no elevator in the Hotel and Nancy felt the need to drag her cooler up the stairs, bumping and sloshing with each step. Of course we were all laughing hysterically and I tried to get those two to be quiet, but to no avail. We found our room and tried to get settled in, but somehow every time we were almost asleep, someone would say something stupid and we would all start cracking up like a bunch of kids at a slumber party. There is a whole snoring story that I won't get into, but let's suffice to say that I got zero sleep all weekend. More than one person later reported that they could hear us cackling down the hallway....again, I must apologise for my sisters, I don't know what got into them.

Saturday was the Shetland show, we only made about 5 wrong turns before we found the fairgrounds again that morning. Nancy brought a lot of sheep and needed some help handling them in the ring since some of hers were competing against each other....well, I don't know how much help I was, but I did drag a couple of sheep in the ring. In this photo Nancy has her black ram, American Idol, and I am next to her with her HST ram Kimberwood Hunter. 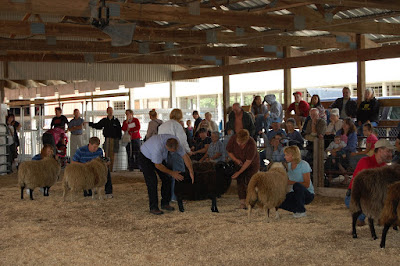 After the show was over, we had some time to hang out with some of the other Shetland people. Here is Garrett Ramsey and his friend, Brianie ( I hope I didn't butcher that spelling). They were so much fun, we later adopted Garrett as "the little brother that we never wanted". He loves to have his picture taken and kept begging me to take his photo. Juliann Budde was brave enough to go to dinner with the motley group of us, she is one of the nicest people ever. 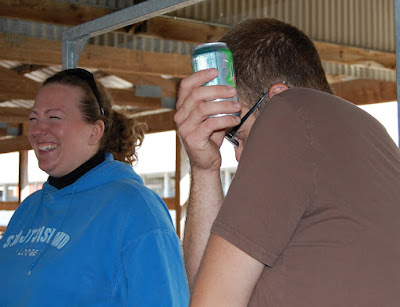 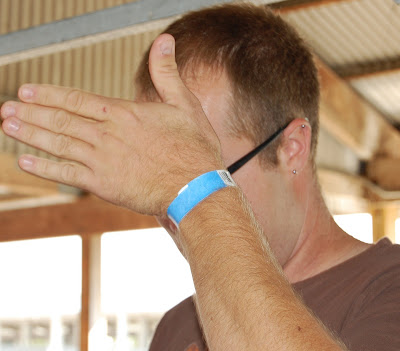 I finally got to meet so many people that I felt like I already knew from reading their blogs or discussions on Yahoo. So much fun.

Sunday was the NASSA meeting, we were only able to stay for a small part of it. We said our good-bye's and Marie and I headed back to the Shetland barn to load up my new ram, and the ewe (Trillium) that I had brought there to sell. Just as we were getting ready to load up the ewe, the world's cutest little boy.....oh, he won't like that...young man, came up and asked if I was Trillium's owner. He wanted to buy her, he fell in love with her and he lives right down the road from her original owners/breeder. Trillium was never one of my friendliest ewes, but she seemed to take to him right away. Don't you just want to pinch his cheeks? I was so happy that she got a good home, I hate to sell any of my sheep, but I am always happy when I find the right home for them. 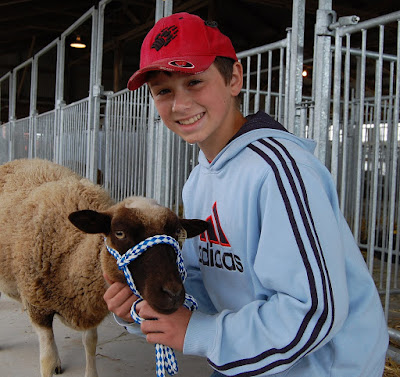 I guess I could have done more halter training with her? 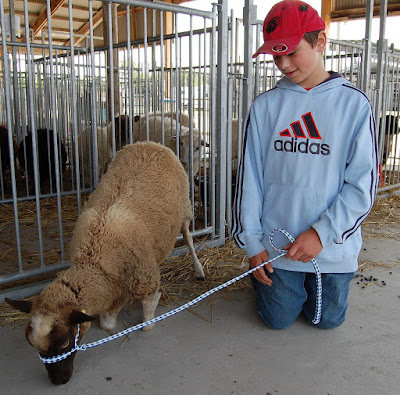 I had about 15 more photos loaded on this post, but I will save those for another post. Thanks Shetland people for a fun weekend!

Email ThisBlogThis!Share to TwitterShare to FacebookShare to Pinterest
Labels: Jefferson

Oh what FUN! One of these years I would love to come to that show and meet everyone. Can't wait to see more pictures and hear how everyone did.

Sounds like so much fun! And is Trillum going to have a wonderful home or what? Her new owner looks to be completely enamorned of her.

Excellent post! Glad you didn't drive off the cliff so we could get such a great update and photos!

Hey those are great photos of me thanks for posting! :P

We did eat the rest of the salted nut rolls and cookies before we got back to Briony's place. We did need the sustenance you know ;)

Now that I've met you your blogs are ever MORE hilarious!

Is it true there is a family reunion in October? That might be fun......

Yeah, ya didn't butcher Briony's name TOO awful much ;-) lol. I'm so very jealous, but will for sure be there next year...pending there are no major emergencies...maybe I'll even show! We'll see.... lol. Glad Trillium found a home...she was awful tempting to me...so purdy! :) Glad you got to and from without driving off a cliff! :)

Great report; sounds like a wonderful trip - and you sold your ewe! Woo-hoo!

I am just going to have to get to a sheep show one day!! Those Jacob sheep are cool but I am loving my polled ram Jed.! Horns are beautiful but such a pain! Oh, that little gulmoget you saw on my blog (& thank you for the compliment) is a little ram. He has about 1/2 scurs & he is so nicely marked! Thanks for visiting me!!!

I almost missed this post! I just found it and am so glad that I did.

As usual ~ you make me smile.

I didn't really get to meet you at Jefferson, but I think you did a great job in the ring with Nancy's sheep. I also do not have any trouble believing the trouble that you guys must have caused at the motel since Nancy was involved. She is my sheep mentor and a pretty special person.

Kara, you should come to the show someday, it would be fun to meet you!

Pamela, I am so glad that Trillium got such a good home, and her new owner was very "enamorned" AND "enamored" of her ( whichever, I knew what you meant)! :).

Thanks Jen, it looks like your Niagra Celtic festival was a lot of fun too, and what a beautiful setting!

Rayna, you HAVE to come next year..no excuses...I'll even bring you a rooster!

Michelle, It was a great trip, and I was so glad to get the ewe sold...now if I can get the last couple sold!


Kristi, you will have to apologize to your little rammy lamby, I didn't see his "purse" in the photo, I didn't mean to call him a ewe....but he is really pretty!

Sharrie, I am sorry I didn't get to meet you. I think we all need name tags at those the shows! You are right, Nancy is special and we always have a blast together.