I haven't been in a bloggy mood lately. I think it is partially due to the fact that a week ago we were reveling in the 60 degree temps, thinking thoughts of spring, and then that all came to a screeching halt a couple of days ago when we were mercilessly flung back into reality with a February snowstorm and more "seasonable" temperatures (that's the local weather guesser's way of saying "freakin cold"). Today was a tad more tolerable, I think the afternoon temp was somewhere around 30ish and as an added bonus, we had bright sunny skies.
It is a really slow time of year for us here. Shearing won't occur for a few more weeks, lambing won't be until the beginning of April, and there is certainly nothing going on in the garden...although, now that I think about it, I do need to get out there and prune my fruit trees and use some dormant spray on them...I digress (as usual). Since the weather was somewhat cooperative, I thought it best that I take advantage of it and get a few things crossed off my 'to do' list. One thing that has been bothering me is the loose fiber on Ande. I really wanted to get a halter on him and start getting some of that flyaway fuzz plucked off since it is loose anyway AND my shearer refuses to shear llamas.
Now, admittedly, I have not been as diligent as I should be in working with the llamas. They really don't require much maintenance and are pretty darn self sufficient creatures which makes it very easy to continually slide them to the back burner, so to speak. Mama llama wants absolutely nothing to do with anyone of a two-legged variety so she demands no attention from people..unless she is hungry. Ande, on the other hand is very "in your face" friendly and because he was born here, I was able to handle him from day one. I got him accustomed to a halter, lead rope, and all the fun stuff that goes along with that. That said, I haven't had too much occasion to continue to work with him on any kind of a regular basis aside from routine shots etc. Soooo, when I went out today with my plan in mind of rescuing that falling fiber. I grabbed Ande's halter and lead rope, fastened the halter on his dainty little head, and thought all was well for a moment, and it was....until Mama Llama discovered my "evil" plot and came running into the barn frantically humming her llama distress hum, which quickly progressed into a llama humming/clucking warning, followed by the backward placement of the ears, to which I responded by yelling, "Don't you even think about it!". By the time those words left my mouth, it was already too late, the spit was flying. And by spit, I don't really mean spit, it is actually partially digested, green, putrid stomach contents, and yes, it smells just like you imagine it would. Poor Ande was caught in the crossfire and was taking the brunt of the flying phlegm, but plenty of it arrived at it's intended destination squarely on my face...and when I say, "face", what I really mean is; face, hat, coat, pants, boots and I am pretty sure some slid down the inside of my shirt... I was afraid to look. All was already lost, and being the ridiculously stubborn (stupid) person that I am, I stood my ground, took her punishment and didn't move until she was convinced that I was not going to hurt Ande. Finally she gave in...maybe she ran out of digestive goo...I guess we will never know the real reason, but she eventually walked away. HA! I win! The only remaining problem, other that the fact that I was now covered in some vile substance and was smelling a bit like a dead squid washed up on the hot summer beach, was that Ande was very distressed at this point. I knew that it was best not to add to his strife by plucking his fleece and making this whole experience something that I would have to call some sort of an animal shrink to talk him down from, so I kept him on the lead for a while, just petting and talking to him until I was sure that his little Psyche had healed.
Now, I don't want people to think that this is usual behavior for llamas. In fact, this is the only time Mama has ever even come close to spitting. She was just being...well, a Mama.

I have no photos of myself after our encounter, probably because after turning Ande loose I immediately went into our basement, next to the washer and stripped off my stinky stuff (sorry for the visual) and promptly started the washer, with HOT water...twice.....with oxyclean...and detergent.

Here are a couple of poor Ande after he was caught in the line of fire....if only this was smellovision. 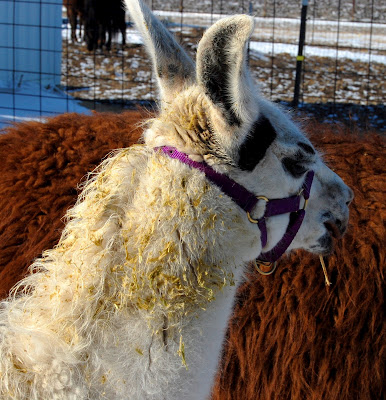 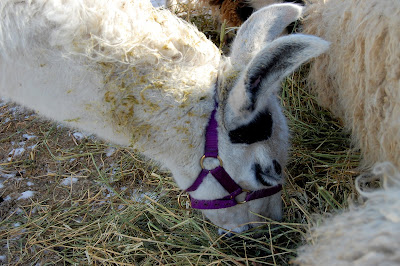 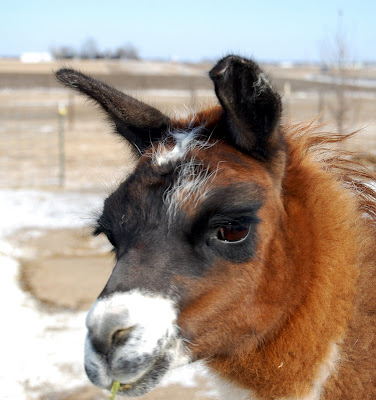 Oh, by the way, stay tuned, I noticed today that my Quarter horse gelding needs his sheath cleaned... I am sure that it will be equally fun!

How yummy....I was reading your blog as I was eating my corned beef and cabbage for dinner! Kinda looked like my cabbage:) I think raising animals just makes us a more hardy breed......my neighbors probably think I am strange because I am always looking at the animal s*#t to make sure it looks "okay". I really would have liked to see your picture too in the aftermath of it all:)

I think we need to find you a job

I'm re-thinking my dream of retiring to a sheep farm...perhaps a sod farm is more my style. I think I might be content just watching the grass grow.

omg corinne you poor gal are you ok? i wish i could see you from Mama Llama's view after she spat at you! And I MUST see you cleaning the horse's sheath. That is too comical for words......are you SURE it needs cleaning or are you just hoping it does :) LOL JK!!!

I foolishly followed the sheath link....and am fully convinced that I NEVER need to own a horse. Not to mention the fact that my breakfast is significantly less appealing than it was a few minutes ago...

While I feel for your gooeyness, it sure made me laugh like crazy on a Monday morning!

I must apologise to Kristi and Melanie for ruining their meals!

Whatever Nancy, when are you going to tell me about your new beau?????

Lisa, sod wouldn't be nearly as much fun though ; ).

Cristy, I am glad that SOMEBODY got a good laugh out of my misfortune!

Having experienced the stench and horror that is llama spit, in a very personal way, I related very well to your article. When we got Lilly and tried loading her into our pickup, the reaction was somewhat similar. That didn't mean, however, that I didn't laugh my head off reading your post. Fabulous! Especially the dead squid reference. Priceless!

Your post and its comments were all great reads. Being the wife of a large animal vet who LOVES to talk and tell stories, nothing ruins my meals anymore. Lisa, get sheep, they don't spit, and Melanie, lots of geldings live a long life without anyone ever messing with their wee-wee. And Nancy, now we ALL want to hear about this new beau!!!

OMG, I'm still laughing - and reeling! Llama spit and horse sheaths - and this afternoon I have to visit the dentist. I'm going to want to tell him all about this while he has my mouth open and I can't speak!

Mama Llama looks too beautiful to have created such -- alien spit! As for the horse sheath, you have now explained something I've wondered about for almost 45 years. When I was a newly wed (in CT) we took a trip to PA where many of my cousins lived. One older male cousin, whom I had always idolized, took us to the barn to show us his stallion. I was horridly embarrassed to see him proceed to "fondle" his horse's genitals - he said it was to gentle him. My then-new-hubby was convinced G was some sort of animal pervert!
Nancy in Atlanta

Nice! I too was eating while Reading this. I am shaking my head and laughing. What a wonderful story to share, who needs a camera?? you described it well...Hahahaha. I am glad that you are alright.