I smell a rat...or something.

You all know by now about my love of Barn Swallows. A couple of weeks ago I noticed that a very young pair of Swallows was building a nest inside of my smaller chicken coop. To me, this did not seem like the best choice of nesting sites; inside of a coop full of cackling chickens, only 6 1/2 feet off the floor of the coop, with me passing in and out right under the nest all day....but then, I am not a Barn Swallow, so what do I know?

Since we have had problems with foxes in the past, I am usually quite vigilant making sure that the barn doors are closed up at night. We have also added electric fence a few inches off the ground around the outside of the chicken run to deter any predators that might try to dig under the fence. With the new development of the swallows taking up residence in the coop, I was faced with a dilemma; do I assume that the electric fence and other measures that we have taken will be enough to keep the chickens safe if I leave the door open for the Swallows to get in and out, or do I close the door and leave the Swallows unable to tend their nest. I opted to leave the door open until we could make a small opening high enough for the Swallows to get in and out without inviting predators. 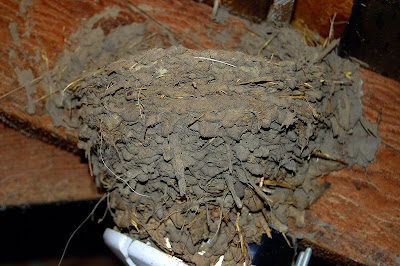 Yesterday was the first morning since I had let the Leghorn chicks and their adoptive mamas out with the rest of the big girls, so when I went out to do chores at 5:30 in the morning, I was anxious to see if everyone had done OK overnight, especially since I had left the barn door opened all night.
As soon as I headed out the door of the house, all I could hear was loud, cackling coming from the chicken barns. "Oh crap!" (or something along those lines). I hurried to the barns. Some of the hens were outside 'bawking' angrily, and more noise was coming from inside. I peeked in the first barn-there were angry hens, but no mama's with chicks. I looked in the second barn, frantically scanning the room to see where the chicks were, then, in the back corner, I spotted them. Both mamas, each with their respective chicks gathered protectively under their wings, sitting in the back of the barn..........well, I wondered, what is the problem then? I walked around checking for the source of the disturbance, finding nothing. Then on one last check of the first barn, I found two of my Rhode Island Red hens glaring behind a nest box and protesting loudly, refusing to move even as I pushed them aside. When I was finally able to see what all the chatter was about....I wished that I hadn't.

THIS was the reason for all the discord!

OK, so now what do I do? This was quite a predicament!
After considering the delicate nature of this situation, the first thing I did was to herd all of the hens out of the coop. As good as they were cornering this guy, I just didn't think that I was in need of further assistance from my fowl friends. Then of course, following the most logical thought process, my next thought was-I need my camera! What kind of an idiot says, "Hey, there is a skunk 3 feet from me...I think I will go get my camera". I think the answer to that is quite clear. 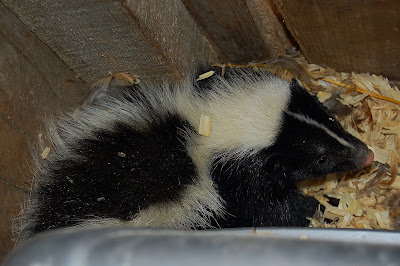 I took these pictures and then considered the conundrum that was facing me-how am I going to get this little 'stinker' out of here without any malodorous consequences? Normally a wild creature that has overstepped his boundaries so flagrantly, and has had the audacity to enter one of the barns, putting my animals at risk, is shortening it's own lifespan considerably. But what does one do with this sort of fellow? If I put out a live trap and catch him, at some point I will have to retrieve said trap.....and I'm just sayin', I don't want to walk over and pick up a trap full of skunk perfume. If someone were to shoot the varmint (not Gary or I......both of us are completely incapable) he would release the offensive odor all over my chicken barns and my eggs would never be the same again. I needed a plan. I carefully moved the nest box. My thinking was that this would give him plenty of room to get out and, just this once, he would be given a pardon.

Hmmmm, he doesn't seem to be moving. 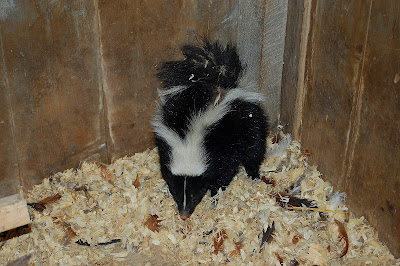 Now he has done it! I was getting a little angry. It was time to take some serious measures.
My weapon of choice? A broom.What!? It was the longest handled thing I could find! 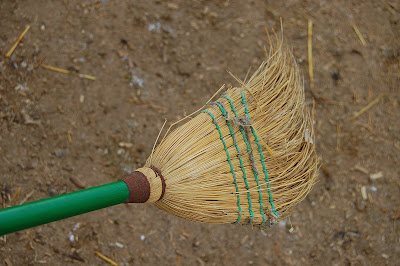 I gingerly poked at my rival, urging him to get on his merry way....and poked again. Apparently skunks have very poor vision and can only see 2-3 feet in front of them so this was going to take some time. I poked, he moved a few feet...tail came up...I moved a few feet....quickly.
This picture is kind of blurry, because, as I mentioned earlier, I was the idiot holding a broom and a camera whilst chasing a skunk. 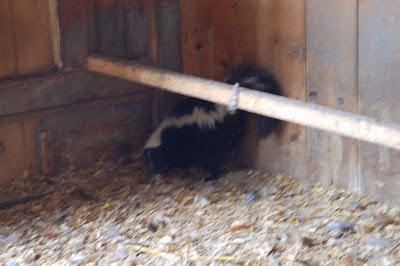 After several minutes of this awkward dance, he finally got moving in the appropriate direction- OUT. I hurried after him as he dashed towards freedom. I think, at that point he and I shared the same aspiration-that he would get out and never return. Unfortunately, my hens had other ideas. As he ran out and tried to make his way to the fence line, my hens came running toward the evil perpetrator like a band of savage warriors, and thwarted his escape.........sadly, his only option was to run UNDER the barn where I, or my broom, could no longer reach. Thanks for your help, girls! Now what? My only hope now was that he would come out of hiding after dark and vacate the premises.
Late in the evening after the Barn Swallows had returned to their nest for the evening, I closed everyone up tight. I got out a flashlight, and while crawling around on all fours, I shined the light, peering into the dark crawlspace under the barn searching for my nemesis......yeah, that was yet another brilliant idea. Since there were a couple of corners not visible, I could not confirm whether or not the critter had found his way out. Even though he never sprayed, this morning there was still a small odor emanating from under the barn.....I am really hoping that he is gone and it is just his cologne that lingers......for his sake...'cause I have a broom and some bad-ass chickens.
Posted by Crosswinds Farm at 6/16/2009 05:16:00 PM

I hope for your sake, he disliked his visit so much, he will never come back. But...having just lost 14 turkey eggs to a similar predator, I can tell you that once they find a source of food, they are very reluctant to leave it.

haha--critters better think twice before messing with you and your gang of chickens :)
what a lovely treat
i have a good skunk-smell removal recipe (well as good as they get i think) if you end up needing one...it took my dogs a couple years after moving to the country to realize that you can't kill the black and white ones...or you can--but it might not be worth it

what a devoted blogger/photographer to snag some pictures of it all :)
next it might be the black bear roaming down my neck of the woods...better keep those doors shut!

OH my, I am sorry but I am laughing so hard I can hardly see. I hope that silly critter learned not to mess with your girls!

There are barn swallows (I think, anyway birds with nests up in the crevice where a wall meets the ceiling) of a car wash bay near me. They scold every time a car is in there, but they seem to have set up permanent residence.

you DO lead the most exciting life! I think you should do 'reality tv farming' or something.

what a cute little baby skunk. they are the most potent too!

I can't believe anyone but YOU would be trying to take photos for the blogger land at the same time!

That little skunk is so adorable! I think you should try to make a pet of it! You could probably litter box train it and bring it into your house. Then it wouldn't be a threat to your chickens...

(I'm counting on you being pretty nuts to seriously consider this)

Whah, ha, ha, ha!! Warrior chickens. OMG, I'm laughing so hard my son had to come in and see if I was okay. That was the funniest thing I've read in a long time.

Good grief, I laughed until I was nearly falling off my chair.

We rather frequently experience skunk events here (with the misery they can cause)and for some unfathomable reason these stories still crack me up. I kept waiting to hear that your inquisitive self got sprayed during your night search; though happy I certainly am that it didn't happen, lol.

Thanks for the hysterically funny farm story.

Awww little baby skunkie...They're so DAMN cute! I want a pet skunk soooo bad, but they're illegal in MN. I'm sure he smelled the eggs and didn't know any better...but once the eggs are all gone, the birds start going next, so you were right to chase him out. Hopefully he'll be so scared he won't come back, but I wouldn't hold my breath...unless he sprays you... ;-)

We have live trapped about a dozen so far and haven't been sprayed yet.
Lay a tarp underneath the trap, with baling twine laid out in such a fashion that you can tie the tarp around the trap once the skunk is inside.
Once trapped, approach the skunk slowly with a open bedsheet, held up at two corners in a big square. If he sprays, he'll get the sheet. Slowly drape the sheet over the trap, gather it 'round so he can't see what's going on outside, then wrap the tarp around the trap and tie it.
You can drown them if you want to, we end up relocating them because my DH is a softie. They can spray if they are shot, so we've been reluctant to do that.

It's official. You are a total kook! I knew I liked you.

Very funny story, you are so brave! I'm amazed and relieved that you didn't get sprayed with all that intervention. Many years ago, we had a skunk kill several of our chickens during the night. Needless to say, he didn't leave the premises alive. And yes, we were left with a long-lasting reminder of his demise!

What wonderful adventures you have!

That is just so funny and I'm completely cracking up over here imagining such a scene.

Even the most intrepid photojournalist doesn't compare with that little episode.