Now that all the lambs have left for their new homes, I am down to 8 ewes for the winter. Err, I was down to 8 ewes. I have 5 older ewes, plus three ewe lambs that I retained. So that's eight, or was eight......until I traded my ram for a pretty little gulmoget ewe so I guess that will make 9.....you know I'm not good at math!

In order to get my new ewe, I needed to get my ram to the breeder in Michigan, and the ewe needed a ride home from Michigan. I wasn't sure when I would be able to go and make the switch since Michigan is a bit of a drive from here. Luckily for me, the Michigan Fiber Festival was going on a couple of weekends ago, and being that I have some pretty awesome friends, it didn't take me long to find transportation. My friend, Juliann, was going to be attending the festival and was willing to transport sheep for me. So, Wednesday before the Festival, I hauled my ram to Juliann's Little Country Acres farm in Illinois. Juliann is one of a handful of breeders that are breeding for polled (hornless) Shetlands, and she has had amazing success achieving the goals that she had set for her flock. She is producing some really well conformed polled Shetlands with wonderful fleece. Unfortunately, they were not very cooperative for their photo-op. 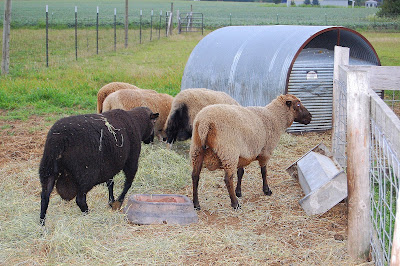 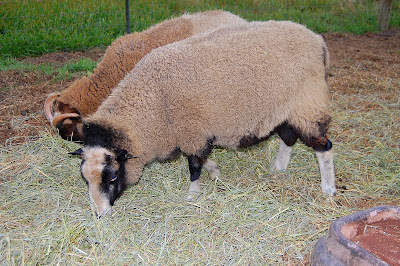 After a nice visit with Juliann and getting to spend some time admiring her beautiful flock, I left the ram with her. Juliann then dropped the ram off in Michigan and then brought my ewe lamb back to her place after the festival.

Last Wednesday I made plans to head back to Juliann's to retrieve little miss sheepie. I decided to take Bailie, my 10-year-old Golden Retriever along for the ride. Gary always feels better if I take one of the dogs along on my excursions...I am not sure why..as I mentioned, Bailie is a 10-year-old Golden retriever, not exactly like traveling with, say, a Rottweiler. The worst thing that Bailie could do would be to "happy" someone to death.

I must say though, Bailie makes a wonderful traveling companion. She never asks how much further the ride will be, she doesn't care what radio station I listen to-or how loud it is, and she doesn't even mind my terrible singing........ 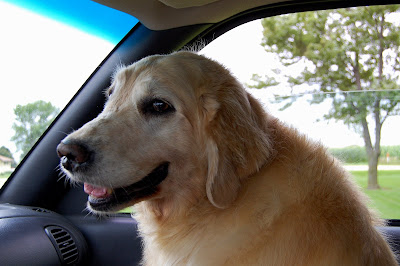 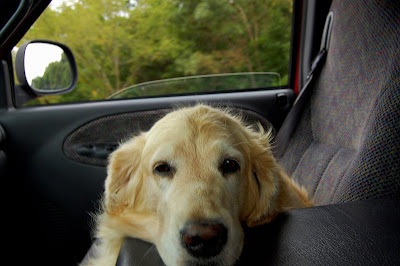 It is only about 2 1/2 hours to Juliann's place from here, and since I live a couple of miles North of I 80 and Juli lives a couple of miles South of I80 it is pretty much a straight shot. However, there seems to be a lot of 'phantom' construction happening on the route that slowed us down a bit. The entire trip there were signs, barricades, arrows and flashing lights telling us to reduce speed because there were construction workers.....I guess they were invisible (you should never take pictures while you are driving). 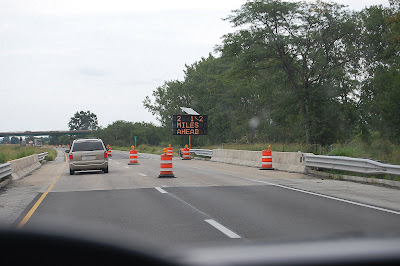 Other than the mystery construction, the trip to Juliann's was pretty uneventful and Bailie was eventually able to tune out my 'singing' and snooze most of the way there. 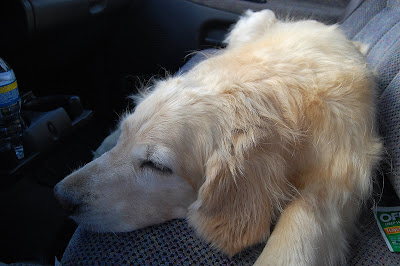 When we arrived at Juli's farm we could hear the faint rumblings of thunder in the distance. I knew that we were expecting some bad weather back at home so we quickly gathered up my new ewe, got her loaded in the truck, said our good-byes and headed back to Iowa. We got about 20 minutes away from her farm and suddenly the winds kicked up, and the rain was coming down in buckets. I heard on the radio that there were tornado watches and warnings, but I had no idea what county I was in, so I had no clue as to where the really severe weather was....being that I was in the middle of torrential rain and getting blown around by the strong winds....hmmmmm, not good. I could no longer see the road, or the pair of taillights that I had been following. I desperately wanted to just pull over and wait it out...but I had no idea where 'over' was and given all of the construction barricades that I had seen earlier, I was afraid that if I did pull over I would fall off the face of the earth into some construction pit. At this point Bailie was sitting up, staring at me, like "are you going to do something about this, Dorothy?" and the ewe was looking at me with the same expression through the back window. After a few harrowing minutes the storm let up as quickly as it had begun and ( once I was able to release my death grip on the steering wheel) we continued on our way and arrived in one piece safe and sound back at home.

Sooooooo...here is my pretty little gulmoget ewe in her new home. 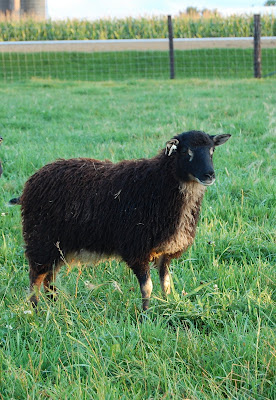 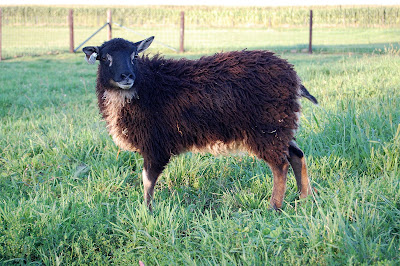 She is an awesome addition to the flock. Gorgeous conformation, a perfect tail and beautiful intermediate fleece....not to mention that flashy gulmoget pattern! Thanks Stephen!
The other girls aren't doing their happy dance because of the new ewe...they heard that I will be going to Wisconsin in a couple of weeks to pick up boyfriends.....for the ewes...I guess I should have specified....that did not sound good.. 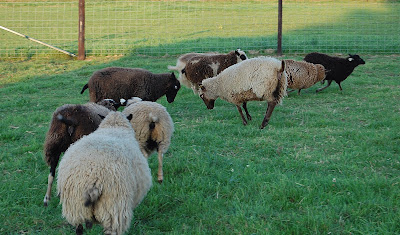 Your new girl is gorgeous! Queston: do the ladies get to specify what they want in boyfriends? Tall, short, horns, spots?

Thanks Nancy! Sadly the girls don't get to decide, I play matchmaker for them...but no one has ever complained ;0).

ooohhhhh she is sooooooo pretty!

She's a real looker! Nine sounds like a good number to me. I think I want nine.

She's very pretty Corinne, I love the longer fleece on the gullies. I'm glad you made it home safely in the storm. Bailie looks like the perfect travel companion. :-)

ooooh! she is lovely!
what will you name her?

I like the puppy pics best..what a sweet face!

your blogs always make me laugh..you are a great picture taker and a great writer :)

I am SO glad that you made it there and back, safely! You should be SHOT for even trying to drive back in that weather!!

That being said, how I wish I could have been WITH you! First of all, Bailie looks like a wonderful traveling companion ~ in spite of me almost spitting water all over my work computer when reading your thoughts on her not being a Rottweiler and "happy-ing" someone to death! The thought of two of my very favorite Shepherdesses in the whole, wide world together, in the same place and I missed it just breaks my heart! OK ~ we'll do a repeat at Jefferson!!!!!!!!!

I'm with Nancy; I counted myself fortunate not to be eating or drinking anything when I read about Bailie and saw her "baleful" look at your singing! Congrats on the new ewe; of course you know I love me my gullies!

Since you said the ewes don't complain about the boyfriends you pick for them, am I correct in assuming that sheep sex looks like more fun that chicken sex? Because I think being reincarnated as a hen would be a punishment, don't you?

OH dear me no....not at all...that new girl just does NOT fit into your flock...terrible choice, bad bad bad. You should definitely send her to me, this instant, if not sooner! Yes, do that. It will make all your other ewes happier. And I would ensure she had a good home. No problem, I can do that for you. Tell you what, just bring her to Jefferson for me....K? ;-)

Nancy, I tried to get her to weather out the storm at my place, then leave after it blew through.

Of course I was wringing my hands in worry. It really was a bad storm, I couldn't imagine driving through it. I was scared to death and I was in my house!
Corinne, thanks for the shout out, and the photos of my Stable of Sexy Studs!

Would love to come and meet the new ewe - if it ever stops raining!

Corinne I loved the pictures of Bailie and the captions made me choke on my tea. What a great new addition. I am enjoying the number 9 with my flock too, my limit is 10. Oh and I am a huge fan of phantom construction too, my favorite being miles of traffic cones block off a lane with no-on in it. Congrats again, she is a looker.

Hello !.
might , perhaps curious to know how one can make real money .
There is no need to invest much at first. You may begin to get income with as small sum of money as 20-100 dollars.

AimTrust is what you haven`t ever dreamt of such a chance to become rich
The company incorporates an offshore structure with advanced asset management technologies in production and delivery of pipes for oil and gas.

It is based in Panama with offices around the world.
Do you want to become a happy investor?
That`s your chance That`s what you wish in the long run!

I`m happy and lucky, I started to take up real money with the help of this company,
and I invite you to do the same. If it gets down to select a correct partner who uses your funds in a right way - that`s AimTrust!.
I earn US$2,000 per day, and my first investment was 500 dollars only!
It`s easy to get involved , just click this link http://sumyparef.maddsites.com/ukyfake.html
and lucky you`re! Let`s take our chance together to become rich