I know that I have been greatly neglecting my blogging duties as of late, it has just been such a busy time of year and there is so much to be done before that 'other' season arrives....you know, the one that brings the s.n.o.w.

I am going to attempt to bring you up-to-date in just one post since I will be leaving for the Jefferson Wisconsin Sheep and Wool Festival in the morning and will likely have new blog-fodder after that.
The few crops that I was able to salvage after this very wet, cool summer actually did fare pretty well. My apples and pears are in huge abundance, although they are not the most aesthetically pleasing, still they are wonderful for jams and canning....which I have been doing at a frenzied pace. My potatoes look fantastic. I was able to dig most of them up last weekend...I say 'most' because with all the aforementioned rain that we had this summer, I did have quite a few taters that rotted in the ground before I could get them harvested. I think we will have more than enough to store for the winter though. 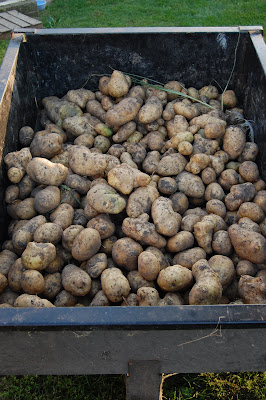 This is what happens when you plant potatoes in clumpy, wet dirt...you get Frankentater. 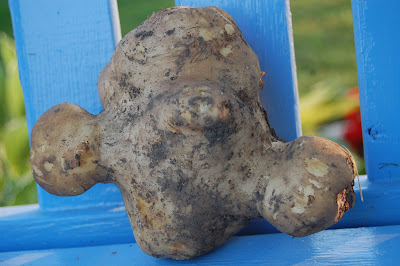 Do I really need taters as big as Emma's head....probably not! 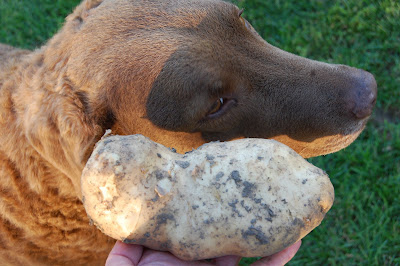 Changing gears.......we normally go to "Eldridge Days" every year. That is our town's little Fourth of July celebration...usually held after the fourth of July, oddly.....also, it's not really 'days' but a day, really......well, nonetheless. This year, because of all the rain, the celebration was postponed until the end of August. They always have a lovely fireworks display and since we live in a pretty small town, there is plenty of room to find a good spot to sit or throw a blanket on the ground to watch the show. More importantly, since there are fewer people that attend this show, it is much quicker to get out of the parking lot when it is all over. 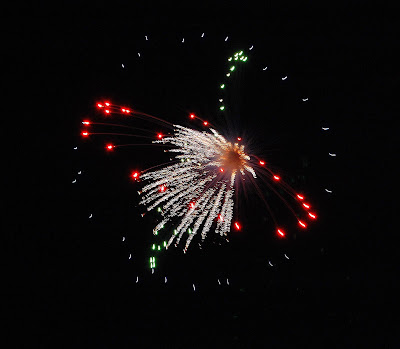 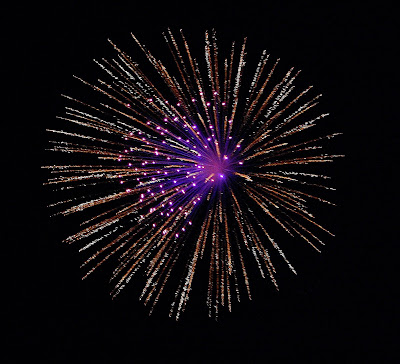 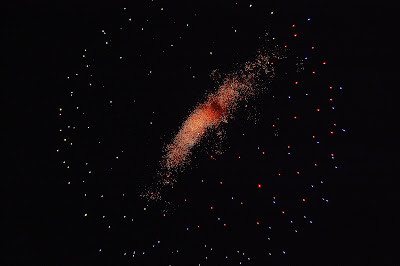 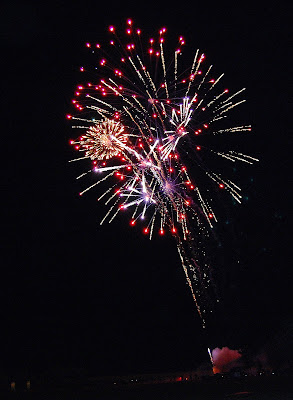 I was driving past a neighbor's house the other day, and noticed a sign saying: "free kittens, very cute, very friendly". Now, you all know by now that I, personally, do not need any more kitties, but I am always willing to help a critter find a good home, so I stopped to check it out. Turns out, they were very cute, and very friendly, so I had to find someone (that wasn't me) to take at least ONE kitty. My niece and her boyfriend seemed like the perfect targets.....uhh, I mean, lucky kitty recipients. We called them to come and look at the kitties, and, of course, they fell in love with one. Don't be alarmed by the picture, the cat is not dead, he merely likes to be carried this way....seriously. He did this when I picked him up and I handed him to Blake and he stayed in this position while we carried him to the car.....it was a little awkward as people driving by thought that we were carrying a dead cat and laughing hysterically. 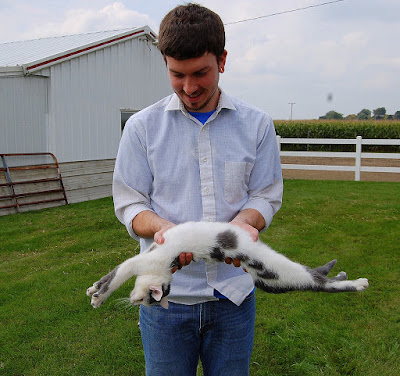 It all made more sense when we met said kitty's mother... 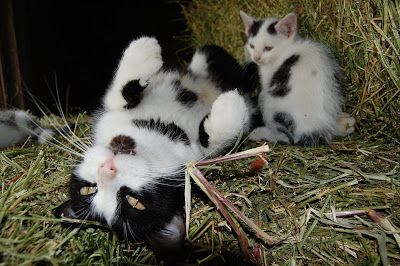 Lastly, my 'Chickens Anonymous' rehab is not going as well as expected...it seems as though I have had a relapse. I blame my friends for this mostly. Cathy, Angie, Cassie and the rest of you...you know who you are.

I ended up finding a really good deal on some Easter Egger/Americauna chicks, and since I can't keep up with egg orders, I figured I NEEDED some. These little girls should start laying nice eggs by the time market starts again in the spring. 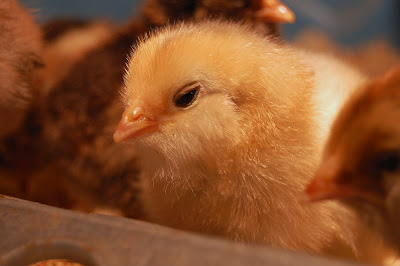 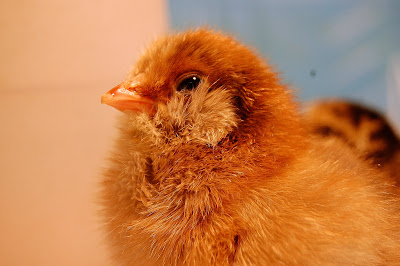 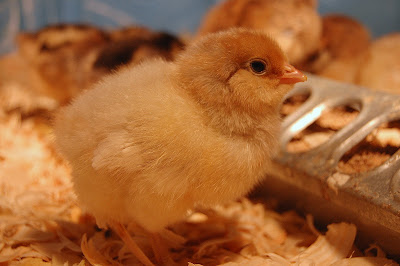 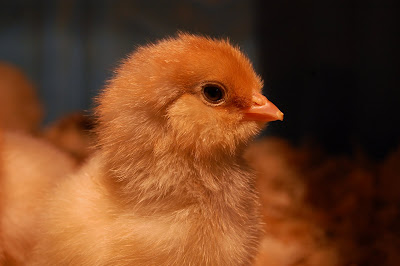 So, now you are more or less up-to-date. Good night! 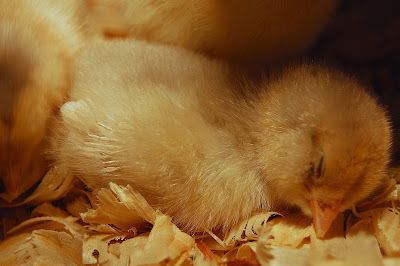 I love your posts! it's like watching a parade go by--you can't help but smile.
can't wait to see what you bring home!
i got two easter eggers...and they are both roosters--bantam ones...they are very full of themselves too--my cockiest little roosters of all
so if you want a baby's daddy for your women...i've got just what you need! (i know you like to collect roosters)
thank you for your comment the other day too...the hawk may have to have an accident now that casey is laid off it'll be something for him to do

Oh, my favorite kind of chicken! I think I'd collect the endless variety available in Easter Eggers if I had the space and a willing husband. For now I'll enjoy the two I have, as well as the other seven hens. Actually, I could easily live without Rhode Island Reds....

Okay, the cat made me burst out laughing. Strange little animal no doubt. And of course I just ADORE you little chick photos. Sweetest things EVER.

Have fun this weekend. Wish we could have attended but too much going on around here too.

What a great post. From the huge potatoes, and the hysterical kitten. To the very cute chicks. A lot of fun to read. I'm looking forward to the first eggs from my easter eggers due this month. Good luck with your baby chicks.

Well worth waiting for, Corinne!! I can't imagine all the work you have to do on the farm, but I did have a feeling that you just didn't have time. But I faithfully stop by daily just in case...and this post delighted me. Emma (my cat) is curled up asleep now or I'd have her come over and look at your "dead" cat picture. She just can't relax when you try to carry her! I'm sure a big part of the difference is that this kitty was relaxed from birth, but Emma was lost in a NYC alley where her foster mother found and rescued her, then moved her to Atlanta where I adopted her. She's very secure now after 3 years with me, EXCEPT when I try to carry her!

the kitty picture is too funny! So, seriously, how many chickens do you have???

You do NOT have to answer Kristi!

I love the kitty pix and those baby chicks are SO adorable! I can't wait till my chicks grow up and give me chicks!

I was wonderful seeing you ~ all-be-it much too briefly, at Jefferson! At least I got some hugs!

Glad to see an update! Sounds like you have been so busy. The noodle kitty is hilarious. I can't believe how good your chick pictures always are. They are amazing.
Tammy (p.s. You know anyone in Missouri that you can 'encourage' to get a kitten? I have some ultra adorable ones!)

This is Erin Wicke, my mom, Lori Stephenson, just told me that you might have some extra pears. If you want to part with any we would love to take them off your hands! Give me a call. 563 652 8444

ps I love your blog! Your pictures are fantastic.

Well shoot Corinne, ya could've brought me some of those chicks to Wisconsin. I would have helped you out with your little backslide into chicken expansion. If only I'd known!!

It was great to see you, even if just for a few moments. I hope we can all meet up at Abi's someday for a big spin and grin session! I have 7 fleeces to take up there now....