Over a week has past since the Wisconsin Sheep and Wool festival and I have been threatened with bodily harm if I don't hurry up and post something about it.....so here it is!

When we go to the sheep show, we like to spend the entire weekend there, visiting with friends and drooling over sheep ( I don't knit, otherwise there would have been a lot more drooling going on...LOTS of beautiful fiber). This year, time and money were in short supply, so we had to make it a shorter trip. We headed to Wisconsin on Saturday morning and spent all day Saturday with some of my 'Shetland friends' watching the show, later we had a nice dinner with some old friends as well as a few new, and had to head for home Sunday afternoon.

I didn't even bring anything fuzzy home with me! Well, that is not entirely accurate, I did bring home this handsome little guy. 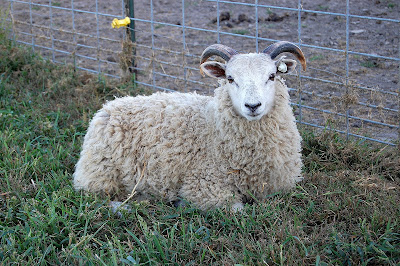 OK, don't panic, I didn't buy more sheep. Nichol, from Blue Goose Farm in Mississippi, bought this guy from Garrett in northern Minnesota.....hmmm, do you see the problem here? There were about 1200 miles separating this little rammy from his intended destination, so Garrett brought him to the sheep show in Wisconsin, I hauled him home with me, and Nichol picked him up here, in Iowa, last weekend....problem solved....sort-of...Nichol still had to drive about 10 hours each way to get her rammy, but I guess that is better than 18!

Of course, when you go to the show, you have to check out all the other breeds of sheep. This is a Katahdin Hair Sheep. They don't have fleece like the Shetlands, they have, well, hair. They shed out so there is no need for shearing. 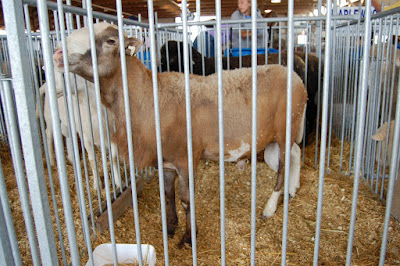 He wanted to come home with me. I resisted, aren't you proud? 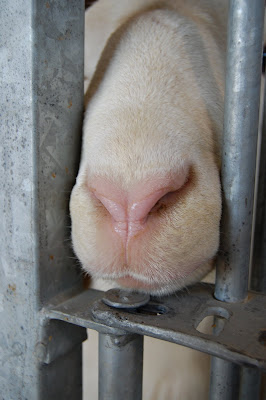 This little boy was uber adorable -proudly showing off his lambs to the crowd and answering questions like a pro. 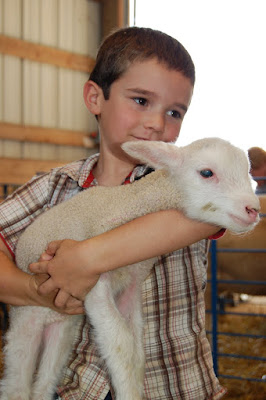 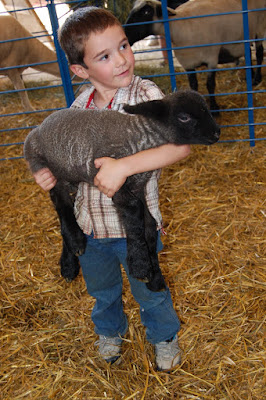 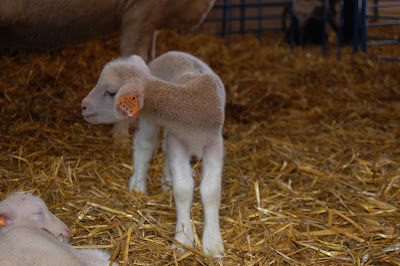 Then we watched a little bit of the "big sheep" show. I think these are Club Lambs..I don't know, they are big meat sheep...I am sure someone will correct me. We are always amazed at the precision with which these kids show their sheep-following every move that the judge makes and pivoting in place to keep control of the sheep while not blocking the judge's view. 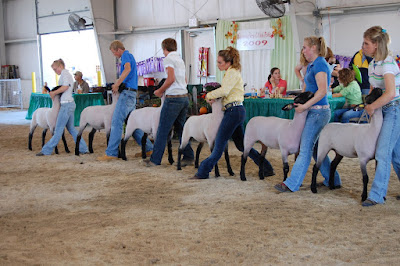 Then off to watch the Shetland show.
Shetlands don't really care about following rules, or what the judge thinks. 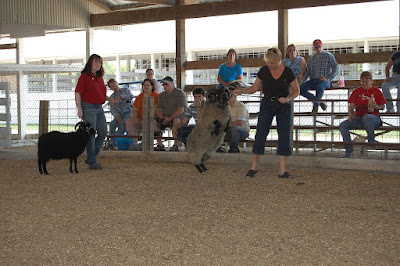 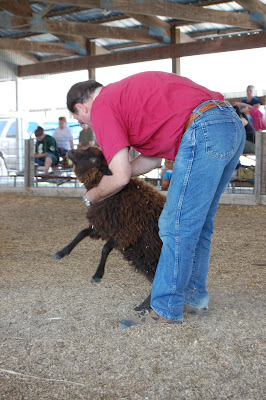 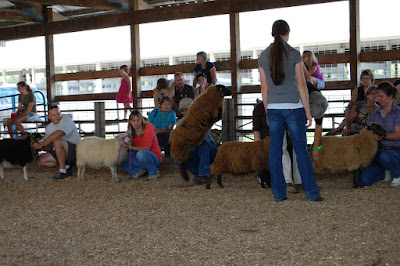 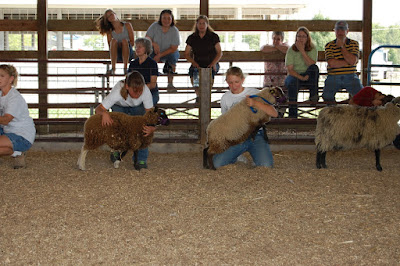 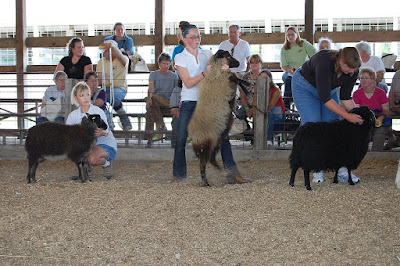 I was made aware after the show that, while the show was going on, Garrett was trying to get my attention.....I know this because I had several missed calls on my cell, as well as some sarcastic text messages mentioning that I should stop taking pictures and look up to see that he was waving frantically from across the arena...I thought he was exaggerating until I downloaded my pictures and found, well... pictures of Garrett waving frantically in the background. 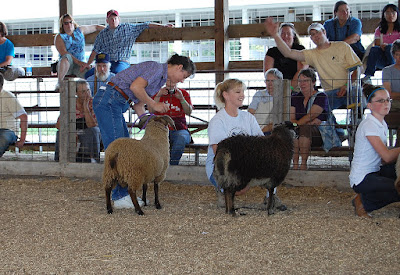 By the way, the mioget ram in the above photo (on the left) is going to be the sire of a few of my lambs next spring. In the below photo he is on the right. He has awesome single-coated fleece, wonderful conformation, a perfect tail and nice wide horns. 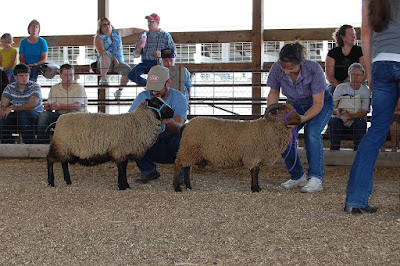 The judge, Letty Klein, did a really good job with the youth classes-explaining what she is looking at in each sheep-as far as conformation and fleece, plus giving the public some background information on the Shetland breed. 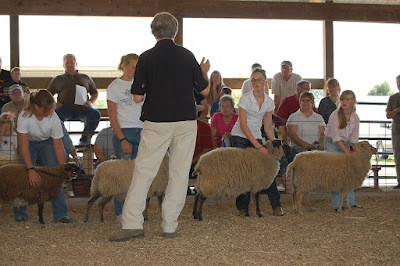 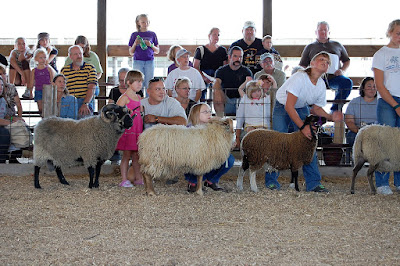 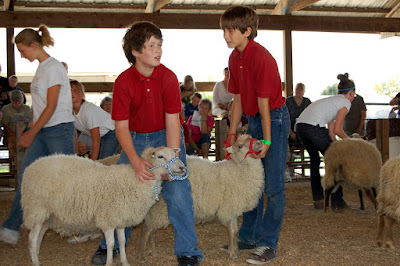 The Czydlo boys-conspiring about something...Tyler was trying to convince Marie and I earlier that day that a spider was chasing us......not even funny!! 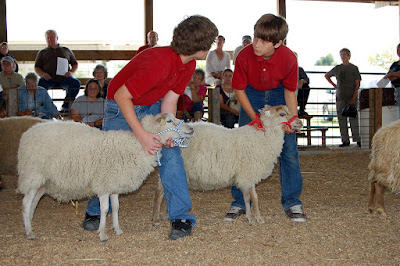 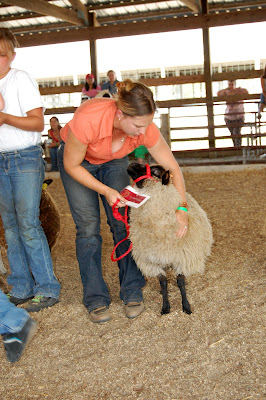 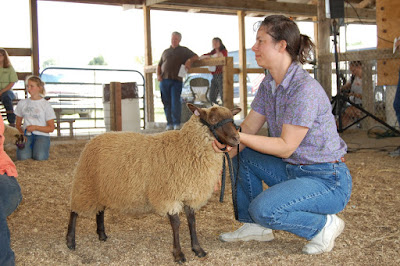 Teresa from Under The Son Shetlands. 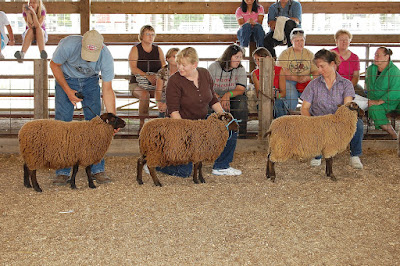 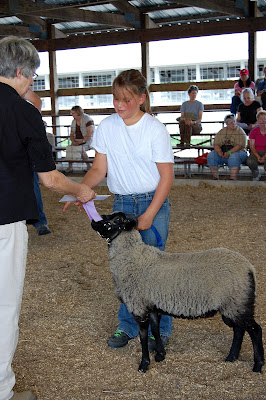 Above is a Sommarang Farm ram lamb. This ram lamb was going to be a wether, but I think he may have saved his manhood since he ended up winning several classes at the show. It was nice to see a scurred ram with very single-coated fleece do so well at the show under this judge. 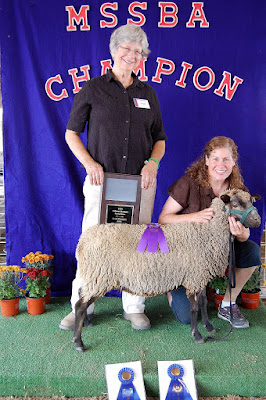 Lori Stephenson won Grand champion with her ewe, Challis. I heart Challis, she is the dam to one of my favorite ewes (Edrea).

Then Juliann decided to make her own class........sheep rodeo riding. I think she even stayed on for eight seconds! She is going to KILL me for posting these pictures........oh, wait, what have I done? Juli is a police officer and carries a gun...plus she is a crime scene investigator so she would know how to dispose of my body...oh well, totally worth it! 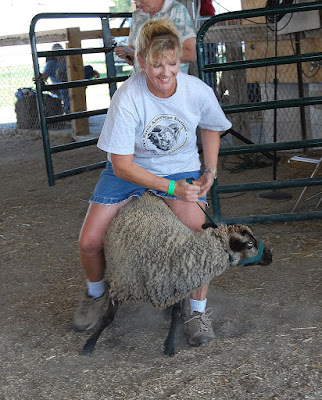 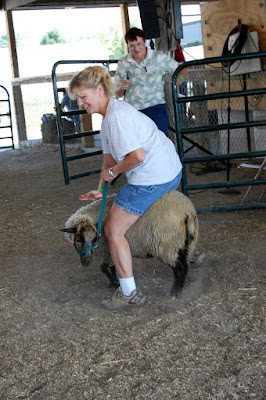 Email ThisBlogThis!Share to TwitterShare to FacebookShare to Pinterest
Labels: Jefferson

You DO know I spend entirely too much time blogging, don't you? So why did you give me links to TWO MORE Shetland sheep blogs? Because, of course, I HAVE to follow them now....

Juli is a POLICE officer? How did I not know this?

wait...Jefferson sheep show? When was that? Gosh that was like nearly a month ago already! :P

Rhodes look super amazing in that photo...wait...maybe I want him back? lol

thanks so much for ALL the photos....I didn't get to see much of the Shetland show so its nice to put names/faces together (and their sheep!)

Hi,
the owner of the champion ram are the Hoitinks Amy and randy and their daughter Holly. Their farm is Wheely Wooly http://wheelywooly.blogspot.com. Great post. I missed the Shetland show this year as I had a vendor booth.

Priceless pictures--from the staid commercial sheep show, to the rowdy little Shetlands to the 'sheep rodeo'. Love it. Esp. the ram who is rearing like a Lippizzan stallion. :-)
Tammy

Fantastic - you took me right along with you to the sheep festival! I love it when my favorite bloggers give me a chance to see something out of the ordinary for me.

We were at the WSWF too, always fun! I love your picture of the suffolks, followed by the shetlands--too funny! They are just like my wild and wooly Icelandics.

Great pictures! Garrett waiving in the background is hilarious.

Great report The rodeo pictures gave me a good chuckle. The sheep with the hair looked very cute. Well done for resisting.

Thanks for sharing all the great photos of WSWF, I wish I could have made it this year. Thanks for giving me a good chuckle this afternoon.
BTW, if you turn up missing any time soon, we'll all know who the primary suspect is. :-)

i am disappointed that you did not bring anything home!

I heart Challis, too! Although wow did she have a mind of her own! She reminds me of my Grace, very head strong. She deserved the honor she received.
Great action photos of the show. Our sheep are the Arabian horses of the sheep world and act accordingly.
That Katahdin ram was awesome! If I ever wanted a hair breed, I would probably have to go with them, although I liked the Dorper ram, too.
As for those last two photos....all I got to say is I need to get my ass off the sheep and onto a treadmill, lol!