It's time for another lamb update...OK, it's past time, but I have been really busy with market and my garden that has decided to go rouge on me (that is a later blog post) as well as trying to find a home for the wayward kitty so it has been difficult to find the time to blog. By the way, with the help of my dear friend Jean, we have found a fabulous home for the kitty, and, for once, it isn't OUR home. BONUS!

Today's update is all about Brewster. I am sure you will remember Brewster, the little super-hero ram lamb that looked like he was wearing a cape and mask. 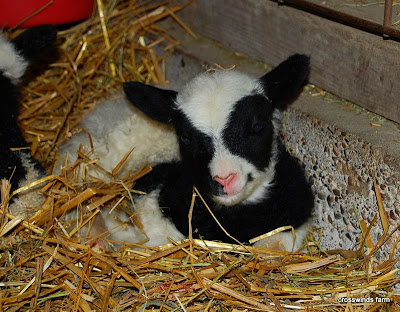 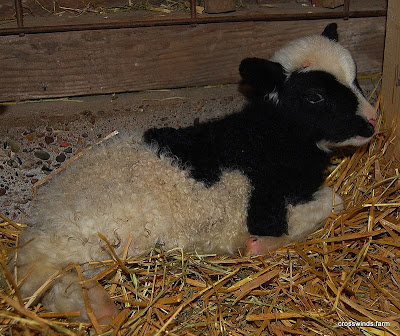 As I watched him grow, I wondered if he was going to grow into a breeding quality ram. His horns were slow-growing and came in much later than the other boys. 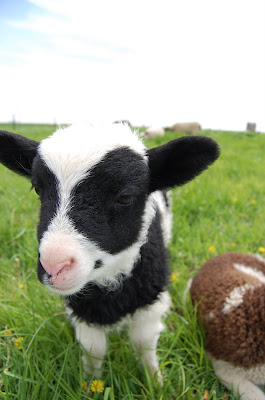 But, then they finally made their appearance and became nice, wide-set, beautiful horns. 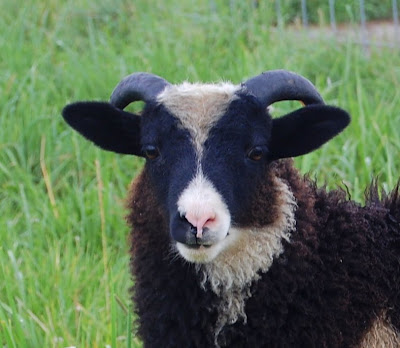 His birth-coat was quite crimpy, but as he started to grow, it seemed to be losing some of it's original softness and crimp, which sometimes happens, so I waited, and kept checking. Eventually, close to the skin there was evidence that the crimp was returning, and by weaning time there was beautiful crimp and luster. 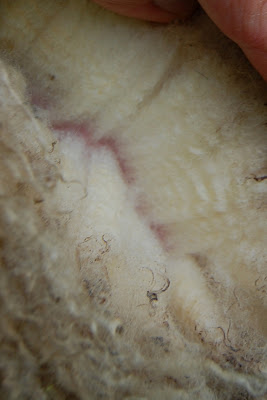 I kept and eye on his tail, which looked pretty good right from birth, and now is just about perfect. 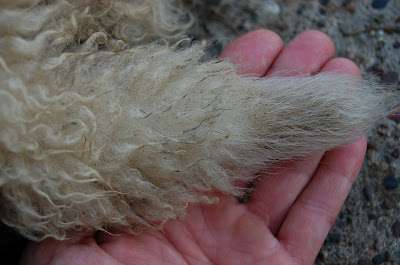 His conformation is nice and square with a wide rear and straight legs. 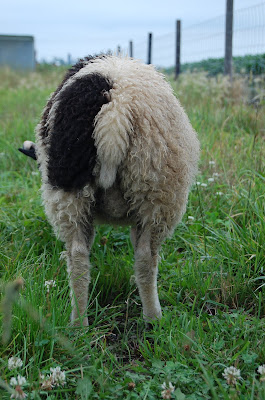 Overall he has turned out to be a stunning ram. Real super-hero potential in this one. Almost everything you could ask for in a ram....... 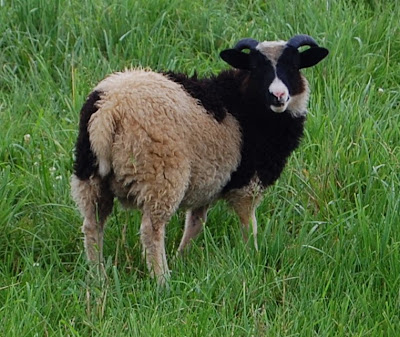 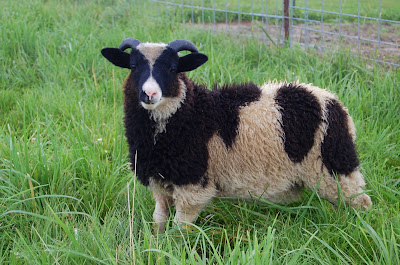 Except........ There is only one coin in the purse.....one  pearl in the oyster....OK, enough of the euphemisms....The poor guy has only one testicle.....that we can find. What difference does that make, my non-sheepie friends might ask? Well, this my friends, means that he cannot be registered.
Since I was unable to locate the offending man-part (not for lack of trying....in fact, I was beginning to worry that the neighbors would call the authorities to report some crazy woman feeling up a little rammy in the pasture every time they drove past) I took him into my vet to see if he could find the missing orb. Nope. Nada. Nothing. The vet felt confident that it was in there somewhere, but where? This leaves the masked man(ish) in quite a predicament. I had hoped that we could still wether (castrate) him and send him to a pet home, but after checking on prices for surgery to 'go in' and find the hidden treasure-$100, that is not really an option. We could have the one visible testicle removed, which would "likely" render him infertile since the remaining testicle would be up in the body cavity and his body heat "should" kill off any reproductive cells (yes, folks that's why they usually hang down so low), however, the ram hormones would still be firmly in place and he would still have a ram's attitude...not a good pet. There is also a higher risk of the remaining testicle turning cancerous. So, what to do with the Caped Crusader? I know that lots of my friends would send him off to market, which works for them, but I think you know by now that I am not prepared to do that. Perhaps if someone has an unregistered spinner's flock they could use a spotted-somewhat less of a ram..... Poor Brewster.
Posted by Crosswinds Farm at 7/21/2010 07:39:00 AM

Email ThisBlogThis!Share to TwitterShare to FacebookShare to Pinterest
Labels: 2010 lambs

Geez, sorry to hear this happened to your perfect little rammy. Nuts is right. I had one this year like that too. He was destined to be a wether from the git-go though, so it wasn't a loss in that respect. I ended up biting the bullet and having the vet castrate him for a whopping 75.00 bucks. He went to a lovely pet home, but of course his sell fee didn't even cover the cost of the surgery. Oh well......Hope it works out for your little guy.

What a bummer! He is SO nice in every other way! Did the vet think the other "shoe may drop" with time? I wonder if the retained testicle had anything to do with the slowness of his horns to start growing.

Oh, NOOOOOOOOOO"! He's so gorgeous! Maybe you can find someone who will buy him as a pet for the price of the surgery?

Poor little guy! I hope he doesn't read your blog or he'll really feel bad. And he's such a beauty!!! I hope you find a good solution...

aw, poor brewster :(
my doggy best friend only had one pearl too...and it was a pain in the rear for the vet to find that other one...way up in there

i would be willing to make a donation to the "brewster nut hunt" procedure if that helps...we don't have a whole lot of extra cash...but i could kick in a bit...how much does it usually cost?

does he have a nice personality otherwise?

oh...and who checks these rams for registry?? is there a testicle checker that goes round or is it on the honor system?

Thank-you all for commenting on poor Brewster's misfortune, but there is hope-It looks like he may have found a home with an unregistered flock in Minnesota : ).

Whew! I thought I was going to have to come and get him! Hope he lives a long and happy life in Minnesota.

Brewster is coming to a good home! Spotted Brewster on my spot carrying ewes-------very exciting!