Guess who's coming to dinner.

Last Saturday morning when I went out to do chores, I followed my normal routine-I walked out to the horse barn, fed the barn cats, threw a handful of cat food to the marauding rooster trio (yes, they love cat food), and then started toward the big barn to get hay for the horses and sheep. Just as I was leaving the barn I heard an unusual, "Meow, mouw, mouuuuuuw!" It sounded strange and I wondered if one of my barn cats was injured, so I did  a head count, nope, all three cats were sitting around the food dish happily munching on breakfast. Still the meowing persisted...but where was it? I looked around the bales of hay, behind the saddle rack, under the wheelbarrow......finally I looked up and saw a kitty perched in the rafters of the barn. He kept calling to me, and as I walked back and forth on the barn floor, he followed along, trotting across the beams above. As friendly as he was, I knew right away that he probably had been someone's house cat, and for whatever reason was dumped. You may remember from earlier posts that when people dump animals here it normally sends me into a rant, but there was something comical about this little guy-with his silly meow and desperate attempts to befriend me that made me forget how angry I was that someone had dumped yet another animal at our farm. 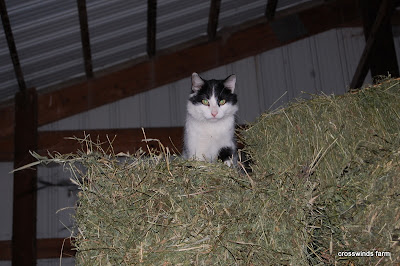 After coaxing him down from his "Flying Wallenda" act, I gave him food and water which he gobbled without even the thought of chewing. I reminded myself not to get too attached, knowing that he would likely wander off over night, but at least I felt better that he had some food in his belly. 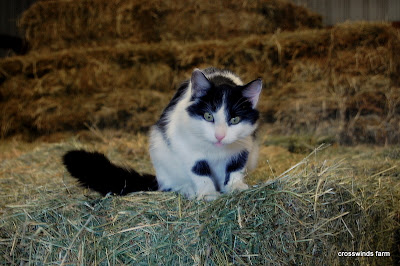 Well, here it is nearly a week later, he still has food in his belly, he hasn't left the property...at all, and he hasn't stopped MEOWWWWWWing. I won't take him to the Humane Society because the animal shelters are beyond capacity, and although he is a young cat, he is not a cute little kitten so his chances of being adopted are next to none. He is getting along well with the other cats, so it looks like we have another resident at the farm. He is going to be in for a rude awakening though, there is a trade-off for free room and board.....he has some parts that are in need of removal. Yes, he still has THOSE. So in the next couple of weeks he will be taking a trip to the vet (ugh, more vet bills).
Also, it would be much appreciated if he stopped meowing continually-it's a bit much at 6am. 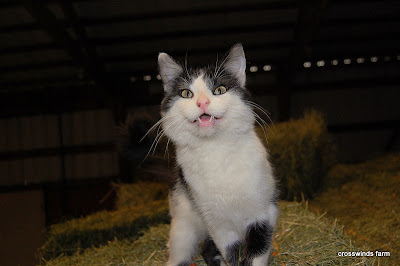 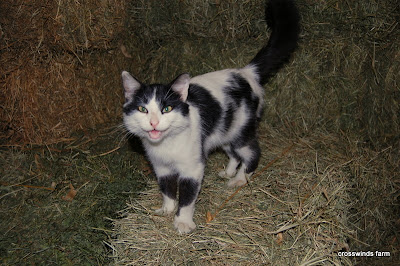 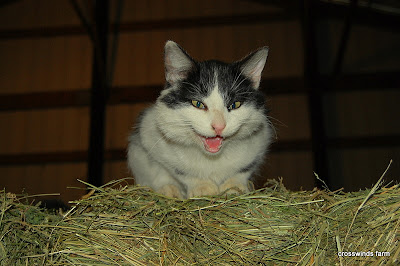 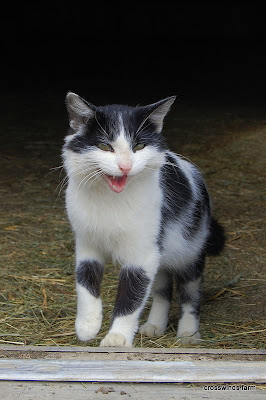 "Meeeeeeeooowwww!"
The other cats are most certainly NOT amused by the new guest. 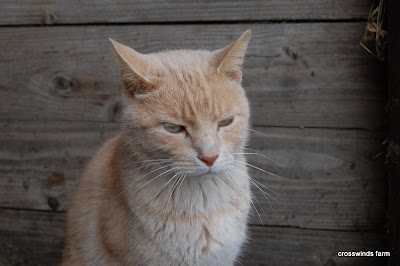 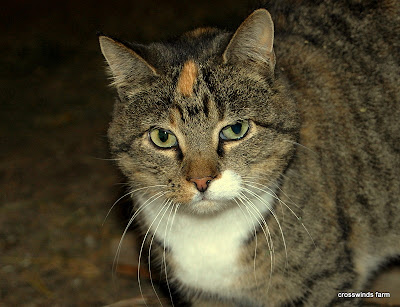 "We are not amused at all." 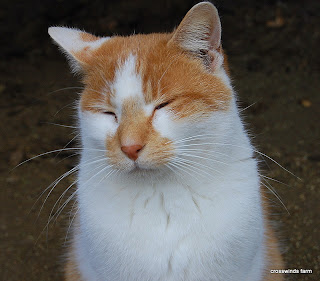 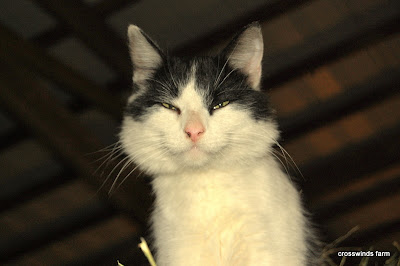 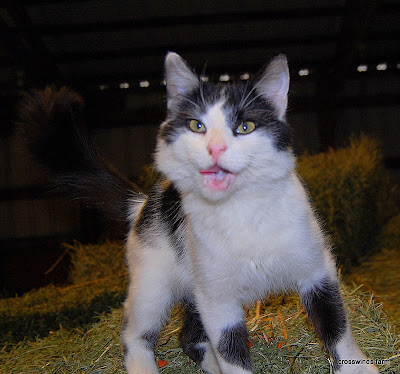 Email ThisBlogThis!Share to TwitterShare to FacebookShare to Pinterest
Labels: Cats

Oh, he has interesting spots. I, too, get angry about people dumping animals near farms. That's how we ended up with our dog. my father was threatening to shoot him before he got in with the pack of abandoned dogs that roams near their farm. He's a big boy and could have caused lots of damage to livestock had he "gone bad". At the time, he was at that awkward stage of a big dog, where he already weighed 75 lbs but was essentially still a puppy. 50 lbs and a few years later, he has turned into a real sweetheart.
There's no such thing as a free puppy- or kitten for that matter.
Good luck.
Judy

He is so beautiful! At least he's a nice friendly one and not a wild pregnant girl!

HAHAHA!!!omgosh! every single picture that cats mouth os sounding off!!! oh that post was so funny!!!! he really is very pretty,er handsome, he'll be "pretty" in a few weeks it sounds like...i love the other cats reactions!! i wonder where he came from??

He really is beautiful, like a long-haired Holstein. :-) Here's hoping he sticks around, catches lots of varmints, and doesn't cost you another dime in vet bills after he gets snipped!

Your new friend is beautiful and clever; he knew what he was doing in showing up at your farm! I would have adopted him in a second...

LOL, he's adorable. I wish we could have barn cats, but the Willabeast wants no part of that.

He is a cutie! And fortunately he looks pretty healthy too...

What a beautiful kitty! Poor boy was probably a pampered house cat who (considering the presence of his parts) starting 'marking' his territory. Rather than neuter him, his folks dumped him. There should be a HUGE fine for doing so!

Lucky boy that he found your place. I hope the meowing eases up though ~ that can get really irritating after a while!

Have a nice weekend!

What a sweet (if mouthy) face! And such a pretty 'flecket' too! ;-) I'm glad he found you and your kind heart. Poor little guy. It makes me rage too when people do this. All but one of the 11 cats here were strays (well technically the kittens weren't--they've never had a hard day--but their momma was carrying them when she showed up homeless.) It's just sad though, as my capacity is stretched and overflowing, but there will always be another one dumped off.
Tammy

Been there.........done that. I have two in line for part removal right now. Your kitty is adorable, but I understand about the noise. We have several that don't' know when to shut-up.

Awww. He is adorable. Boys are cheaper to fix then girls.

now thats just too funny!! What cute photos!! Sure sounds like he's telling you about his other life to me??

lol
you make me laugh!
what a good girl you are!!
keeping him! :)
all your cats are beautiful
love the tiger with the orange smudge...how unique!

you are right...chances aren't good for kitties at the shelters
we recently took 12 that were going to be put down for space...though we found 3 homes!
woohoo
some of them are SO friendly too
it's a shame no one adopted them

Poor guy, so lucky to have found you.

And what wonderful spots.

Strays generally don't stick around here either. The other cats usually run them off. But we have one that's stuck around for a couple months now too. His parts have also been marked for removal. I figure I'll put the money into him and after I do that to him, he'll disappear. Ah well, at least he won't be out making more strays...

I got me one of them there cats, too, Co-rinne!! Tiff came to us with a colony of abandoned cats from down the road. The humane society kindly fixed them all for free and told us not to do any heroics for them if they get sick or injured. Weeellll, ol' Tiff disappeared one day. I started walking the ditches calling his name, but looking for his body. Crying my fool head off. He shows up a week later, dragging one leg, and sick as all get out. So off to the vet hospital he went for three days. And $$$ later he's living in the house 24/7. He's sitting in my lap right now making sure I also say that he's a gorgeous boy!!

You gotta big heart, Corinne! Thank you for taking care of another abandoned animal.

If I batted for the other team, I think I would ask you to marry me :-)

I'll marry you either way, Karen Anne. My next husband is gonna be a woman. I can see now why bigamists have all those wives--lots more gets done around the house. You'd have to keep me in the manner I have grown accustomed too: lots of chicken feed, a pair of chore boots each year, and organic chicken breasts for the old cats. Of course, if your my husband, er, wife then you'd have to live in a 114-year-old drafty farmhouse with no TV, no microwave, and now no working shower. Oh, and I'm not sure what I'm gonna do with the current husband. He's still handy with the log splitter and catching goats.

As always, I really enjoyed reading everyone's comments. Thank-you all for taking the time to write.
I am also very excited to know that I have my very own internet dating site ; ).

We too get dumped on by the irresponsible "animal lovers" out there. I won't say much, because I also ALWAYS go into a rant.

Your new boy has such a cute face and what a smile. He looks like the Cheshire cat. I hope your other cats will get along with him.

I'm slowly getting back to my daily blog reading after being gone for 3.5 weeks, traveling over 4000 miles to see my little grandson in Savannah. I missed my Calico Queen (also adopted!) so much that I called the vet while I was at my daughter's and asked about Emma. Diane is still chuckling because she overheard me tell the vet's assistant: "Tell her I love her!" Our tossed-away finds make such lovely companions!!!