It's hard to believe that summer is over already, especially since the temperatures have been so unseasonably warm here in Iowa, but there are signs everywhere that Fall has arrived. I really love this time of year. 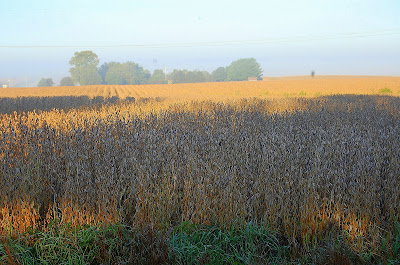 I would love to have the windows open to soak up some of the last warm days, but as harvest is winding down, we have had to close the windows while our neighbors finish bringing the crops in to avoid having 3 inches of  corn, soybean and gravel dust covering every surface in the house. 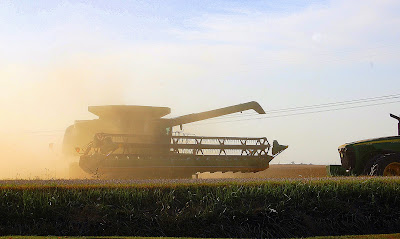 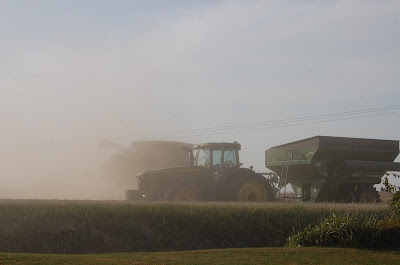 There are still some splashes of color trying to hold on. 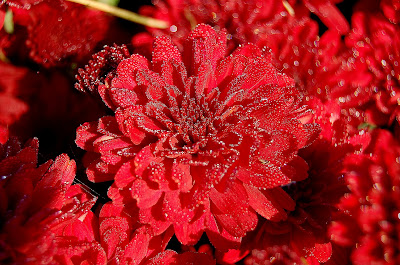 My mums went a little over-the-top this year. 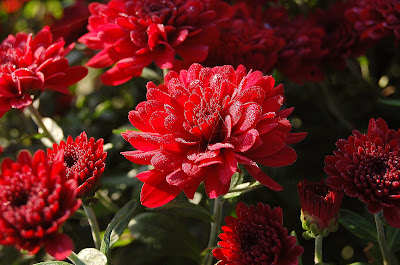 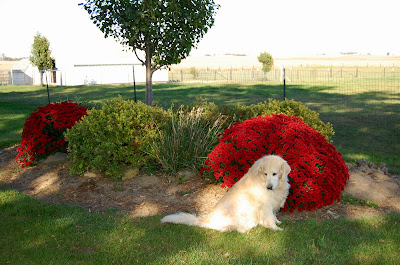 The Straw Flowers are still blooming. I will be cutting a bunch of these for dried flower arrangements. 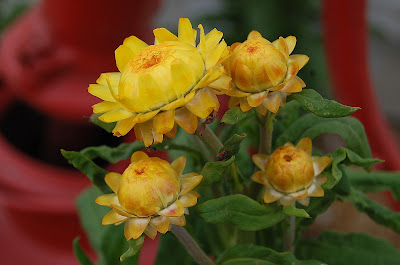 The Giant Amish Cockscomb is still vibrant...emphasis on "Giant"-some of these blooms are 10-12 inches across. I like to grow them because they are one of my daughter's favorites...she thinks they look like brains....I would tend to agree. 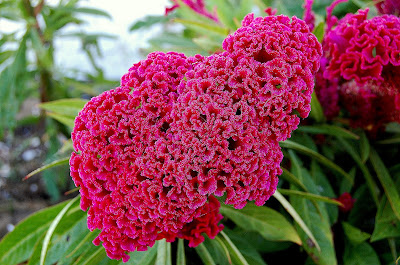 I was able to salvage a few good pumpkins out of my garden-o-weeds. Most of them are adorning the porch right now, but one by one they are being fed to the sheep and chickens. 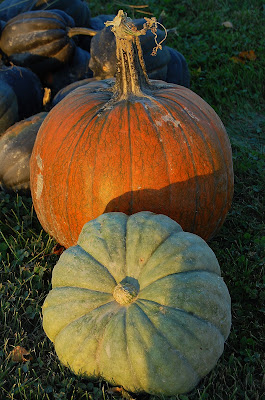 The sheep and chickens absolutely LOVE pumpkins, and they are so good for them. As an added bonus, raw pumpkin seeds are thought to contain natural dewormer. 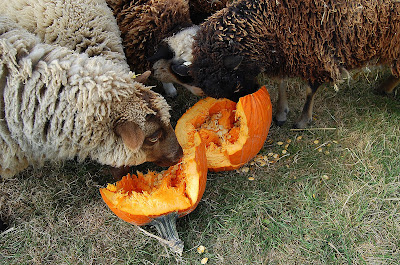 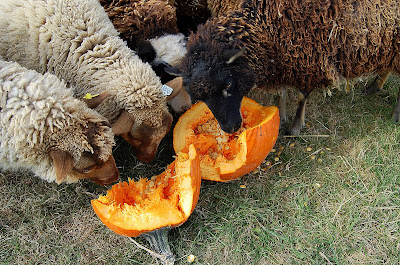 Something else that I found in my weedy garden was this Praying Mantis egg case, I always get a kick out of finding unexpected things around the farm. This case could hold as many as 400 eggs, they will hatch out in the spring and become great natural pest control for my garden.......now if only I could get them to eat weeds.... 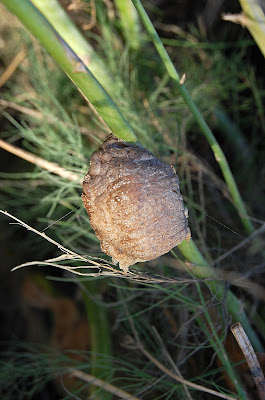 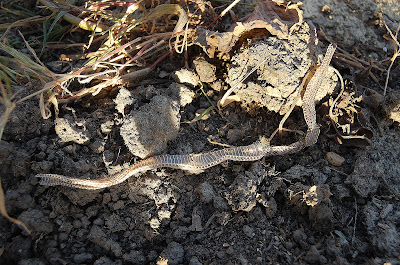 There are other signs of fall.
There are some things that go along with the season I don't like.....really don't like, REALLY REALLY don't like-like the expense.
We got our propane tank filled last week..... 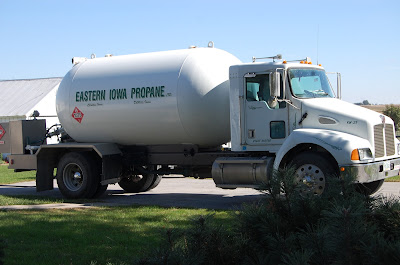 I hate to see this guy coming. We have a thousand gallon propane tank to fill, and with propane at $1.37 a gallon...YIKES! Hopefully this will get us through most of the winter. Normally we end up adding a few more gallons around February/March just to get us by until it warms up.
The other big expense is hay. I am lucky enough to have some wonderful neighbors that grow beautiful hay at reasonable prices, I got this gorgeous 4th cutting alfalfa for the ridiculously low price of $3 a bale...unfortunately I was only able to get about 70 bales of this stuff. Most of the hay this year is running around $4 a bale or more. This pure alfalfa is too rich for the sheep and horses fed as is-they would be as fat as hippopotamuses, but I will mix it with some nice (mostly grass) hay that I am getting from my cousin and it will be yummy deliciousness for the critters. 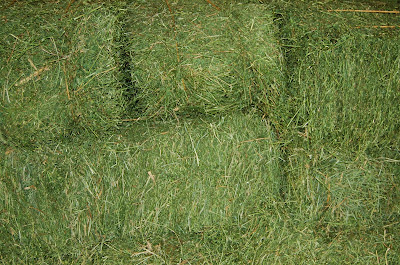 As much as I hate the aforementioned expenses, there is no better feeling than knowing that the barn is full of hay and the animals will be taken care of over the coming winter. 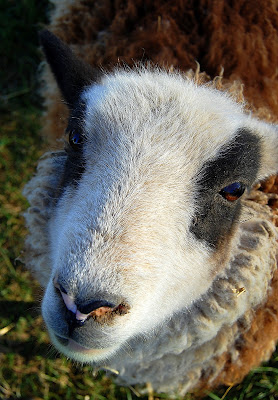 I love a barn full of hay and tank full o' propane. And the sunset on a harvested field--goodbye bean dust. And the animals love this great weather too. Your sheepies are still out nibbling on the last remains of the pasture. My goats? They're a different high-maintenance story. Happy Fall Corinne.

Beautiful Pictures as always Corrine. I am just dreading winter but I must say that this has been a beautiful fall. Enjoy it while it lasts.

Winter squashes never attain any size in my garden, so on my way home today I bought a huge pumpkin for $2.50. Now to see if my chickens and sheep will eat it!

You've done a great job of capturing fall in Iowa! I must say I love a barn full of hay!

You're lucky if the worst you get from the neighbors harvesting their crops is DUST. My entire house is coated with Asian Lady Beetles! Those suckers bite and if you try to kill them they let off the most disgusting smell!

It also doesn't help that I'm allergic to them...

Hello from Northern Michigan!
I'm going to make you feel better about your propane bill. I'm locked in at $1.84 a gallon (because I paid cash, up front), and my neighbor, who pays on the budget plan is locked in at $1.97.
I about choked when I saw how little you pay.
Hope this helps! Now I'M depressed!
:D

Cassie, the sheep are out on the pasture for the time being, but since we haven't had rain for a month there is nothing for them to eat, I have had to start feeding hay too : (.

Michelle, that is a cheap pumpkin! My girls didn't know quite what to think of them the first year I fed them pumpkins, but now they are hooked!

Thanks, Teresa! I always stress out until the barn is full. I worry that I will run out in February and there will be none for sale.....it never happens, but I like to worry : ).

Nancy, I hate those things, and yes, they STINK! ((hugs))

Hi, Sue! OUCH, sorry about your propane. I guess I shouldn't complain about mine...although last year I got it for $1.15! The previous year it was $1.97 though.

ah, i LOVE a barn full of hay as well!
the smell is intoxicating!

which reminds me...our hay guy has not called....

Wonderful post! Your mums ARE beautiful. Hope the supplies see you through the winter!