Where did September go??

I'm not dead! I know it has been nearly a month since I last posted, but early Fall is in full swing and the cooler temps are a rude awakening to the fact that I have a mountain of projects that need to be finished before the dreaded winter months arrive. I have been feverishly, but not very successfully, trying to hack away at that long "to do" list. Just to complicate things, Fall craft shows have started as well and that takes me away to exotic destinations (like Des Moines, Iowa) on weekends leaving me limited time for blogging...or anything else for that matter.

Let's see........I need to catch you up....
The second weekend in September was the Wisconsin Sheep and Wool Festival, we go every year, but this was probably the best time I have ever had there. I got to see a lot of old friends, and made a few new ones. There were lots of laughs...and some things that I can't, and probably shouldn't, explain... 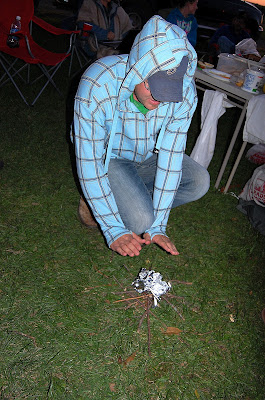 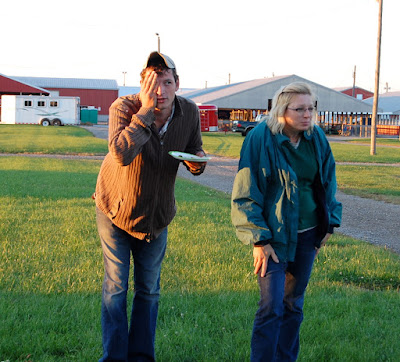 I always enjoy looking through the barns with all the different breeds of sheep. 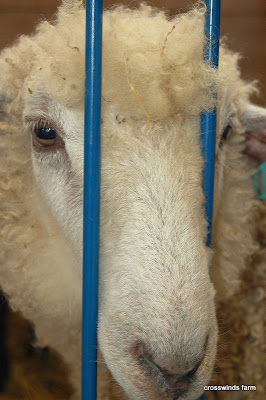 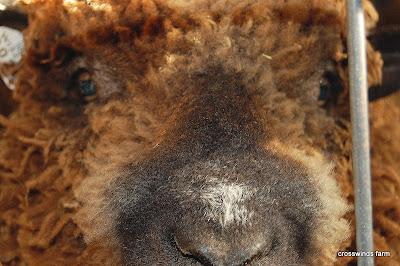 I think this Babydoll was giving me the evil eye. 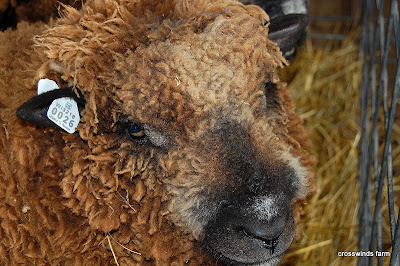 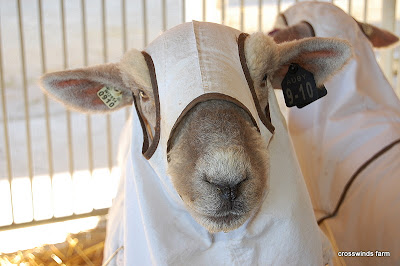 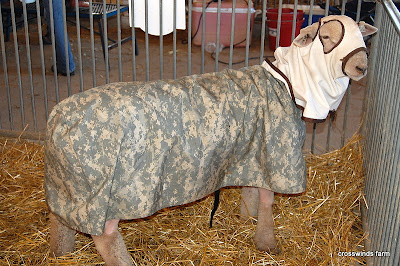 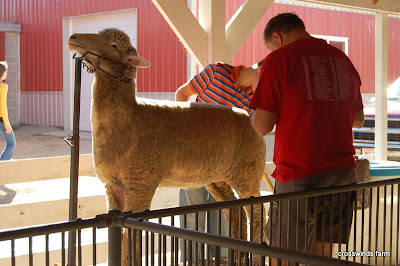 I am really glad that I raise my little Shetlands-not that I don't appreciate these other breeds, but the men that own this ewe told me that this she is 275 pounds and the ram that they showed that day was almost 380 pounds. For comparison sake,  my heaviest ewe is about 90 pounds. 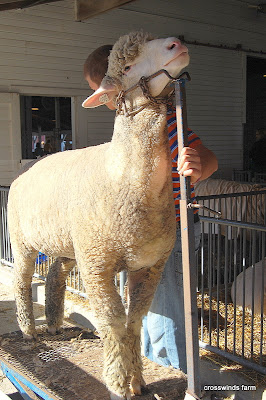 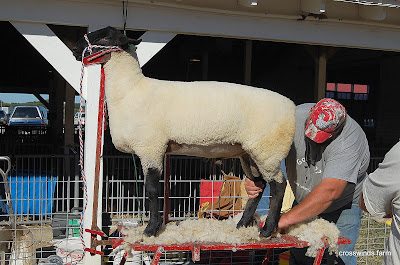 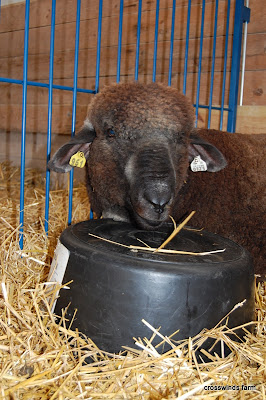 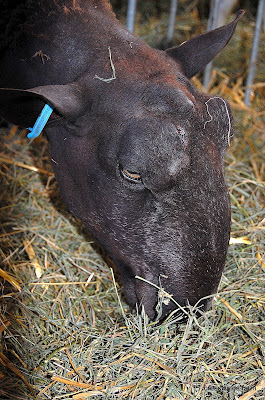 So that was Jefferson in a nutshell.
Back at home, one of the things that I have been working on is getting the barns ready for winter. We have a couple of barns that desperately needed paint....well, they kind of needed paint...until I went crazy with the power washer and left the barns nearly naked. FYI, power washers will also remove skin...just thought I would throw that out there..there was an incident...don't ask. 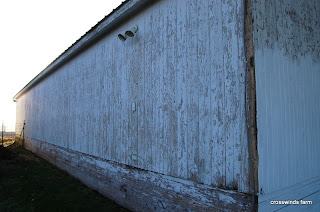 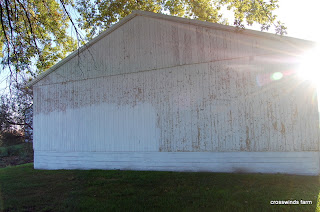 As of yesterday, I have most of one side done, except the highest point. For those of you that are unaware, I am deathly afraid of heights. Sure this doesn't look that high, but when the wind was blowing at 25 miles an hour and I was trying to hold onto the ladder and a can of paint with tree branches whipping around me, I had to call it quits. Plus, as an added bonus, all of my neighbors were hauling grain and moving combines down the gravel road so every time they passed by the wind would send  a flurry of the gravel dust flying right into my freshly painted barn...which, on one hand made them less glossy, but on the other hand added a designer textured finish that I was not going for.
Bailie was spotting me on the ladder, so no worries if I were to fall......of course I managed to take a picture...the things I do for my blog readers! 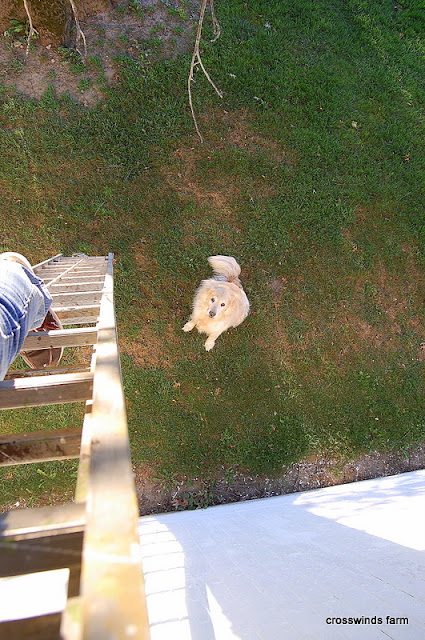 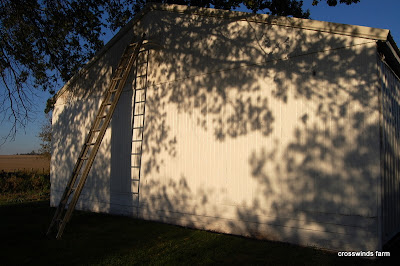 You may be thinking, hey, that building looks a little shiny. Well, it is. The reason for the shiny building is that we are cheap frugal.  A few weeks ago, Gary found a hardware store that was going out of business and discovered a load of exterior paint that was originally 30 dollars a gallon marked down to $5.99 a gallon....sooooo it happens to be semi-gloss, whatever. 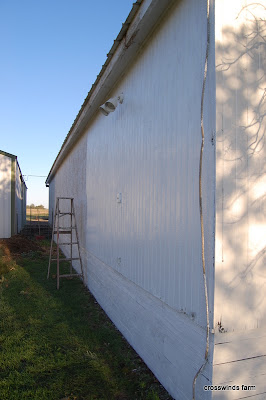 A few of the other things that I am working on, besides getting ready for the next craft show:
- Planning breeding groups for the sheep (yes it's about that time already!). I still need to find another spotted ram...which is getting to be a bit of a challenge.
-I am still sorting out chickens from the previous Chicken Math episodes...more on that soon.
-I threw in the towel on my garden about a month ago, the weather was just not conducive to growing a proper garden this year and I finally decided that trying to resurrect it was taking too much time away from other things that needed my attention, so now I have to pull out the whole mess and burn down everything to kill all the weed seeds that are otherwise sure to take over next year.
-I didn't get near the amount of apples processed this year as I did last year, they were just not the best quality, in fact after using what I could to make jam and apple pie filling, I ended up throwing the bulk of them to the chickens and gave a few to the sheep as well. 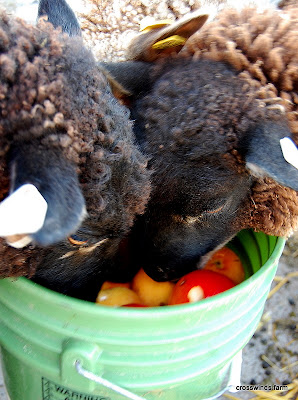 "We think they are just fine, mom." 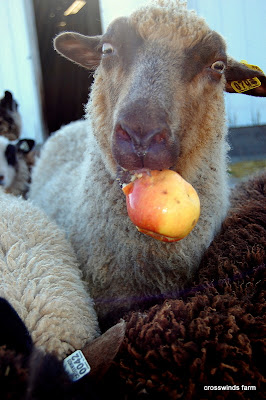 "It is really hard to grab a round apple when you only have bottom teeth!" 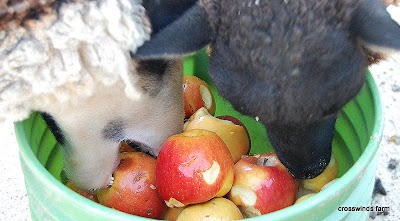 I just love that shot of Garrett "warming" his hands on that pitiful excuse for a fire.
And, Adam, what can I say, he is priceless.
Had a great time with all of you this year, best ever.
Good luck on the barn, it looks great.

you're so fun even your posts make me feel like i'm having a great time :)

love all the pics and catch up

why do sheep only have bottom teeth?

i think the shiny barn is great (are there any cans of paint left in that sale? lol)
you might start a trend

busy busy busy
all it seems like here too!

great to hear from you again

Well- from your pictures, your building look like they are turning out great! (can't see any "texture" in the photo anyway!)

Thanks for the update- missed reading your blog.

I am impressed with your ability to confront your fears. I know what you mean about that garden and to do list--mine kept getting pushed back all summer too. At least the weather is better now.

Welcome back! I know I've missed you, but I have to remind myself that I'm just sitting here, retired, while you have a very busy life! I think the barn looks great.

I've also wondered about sheep teeth - I just read someplace else that they have only bottom teeth - why?

I had to look up sheep teeth. Here's the scoop, if I put the link in right:

I almost got the whole barn finished yesterday, YAY!

Thanks, Karen Anne for posting that link......sometimes the author of this blog takes a long time to answer questions ; ).