For those of you that are new to my blog and missed the primer posts on Chicken Math, you will need to read those posts so that you can fully understand the complexities of Chicken Math....even then you will still be confused, trust me on this one.
Prepare to be confused. 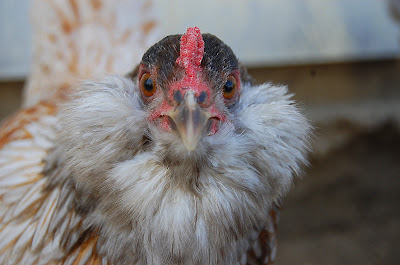 Now that the chicks from the spring 'Flood-o-Chickens' have all grown up, it has become apparent that there are lots of boys amongst the ever-burgeoning flock, so the time to enter a new phase of Chicken Math has come. I know, this seems like a wild, ridiculous concept, but we must now delve into the intricacies of Chicken Subtraction.
This lesson took a while for me to catch onto, it was not like a bright bulb suddenly illuminated over my feather-filled head, but more like a dimmer switch that was being slowly turned until 'it' finally came to me....I don't have to just be on the receiving end of Chicken Math! I am a giver, I can spread the chicken love too.

The first step to chicken subtraction was to sort out the extras. Obviously, most of the boys had to go.  I am keeping a couple of roosters....but one can only use so many roosters. The rest had to go. I have no use for that many boys...don't ask me how many, if you've read the previous Chicken Math posts, you know I have no clue. There were also some females among the 'filler chicks' from the hatchery, and I normally keep all the females, but some of them were breeds that I don't keep, either because of temperament or egg size etc. so they had to go as well.

The next phase of Chicken Subtraction started innocently enough, the first victim  recipient of reverse C. M. just kind of fell into my web...err...was lucky enough to be in the right place at the right time. We had a really bad wind storm one day last spring and ended up with several nests of baby birds knocked out of the trees on our property. I called Jane, our local wildlife rescue person, and she agreed to come and pick up the babies. While Jane was visiting we got to chatting about chickens and she made a comment that she would like to add one or two more hens to her flock, but she did not want to sign up for the hatcheries minimum order of 25 chicks. Well, Jane, I can help you out
Posted by Crosswinds Farm at 10/13/2010 06:46:00 PM

i LOVE chicken math
you should teach in the schools--would be a great way for the kids to learn life skills
see--you do use math in real life :)

it's too bad the roosters are roosters--they are so beautiful

we're needing to send a few down the road to the bachelor pad...either that or start selling tickets for illegal fighting rings--the roo's are staring to get too big for their britches and the hens are being run ragged with all the er, attention

this is WAY cooler than the math I learned in school.

Oh my...I love it. You made me laugh out loud at your chicken math skills...and the whole time I'm thinking it's a good thing you don't live nearby! I have been thinking of getting a trio of HENS, but I could see how that would end up in your neck of woods.
Thanks for the wonderful post.
Tammy

I love it! I've done some chicken math a time or two myself. If I were closer I'd be interested in the GLW, he's beautiful.

I'm a-scared to come to your house anymore. I either come away with a sheep or just its fleece or a barrel o' fruit or a rooster.

And Ugarte. Talk about BMOC. He loves his "ladies". He's as big as a St. Bernard.

I don't do C.M., but I AM getting some of those pretty Speckled Sussex tomorrow!

You are an EVIL woman!

But I still love you!

Love, love, love this post. I wish I could say I haven't practiced chicken math myself........I've always seemed to talk folks into more chickens than they intended to take. So, I am ever so grateful for your willingness to cut me a break when I took the barred Hollands. Which, by the way, are wonderful chickens!!! And, yes, it's 2 roosters and 1 hen. LOL
You should write a column for the newspaper, you weave a fabulous tale and even if you don't know the subject, you pull us all in with your story.
Congrats on another chicken match season and on another entertaining and delightful story.
BTW-Did you vote yet?

They are handsome gentlemen, but I still have a Naughty Rooster Boy that someone chicken mathed me with. Hmmm. I wish I had read this post about a year or so ago.

This is just so funny!

Those sure are beautiful chickens, especially the Buff Rock. It's a good thing I don't have a place for chickens, I'd have them coming out of my ears.

Lol. I was rolling with laughter! Love this. Also laughing because you still have that rooster you tried to give to me. I learned from the 1st time you chickened math me. :) I will confess I chickened math a lady at the last swap meet too.