Iowa in December and sheep hoarding

Yesterday Gary and I made the 3 1/2 hour trip to Lori Stephenson's Sommarang farm to pick up my "rent-a-ram". I had intended on taking lots of photos while there. I brought my camera, even had it in my pocket, but it was as cold in Wisconsin as it has been here in Iowa and I couldn't muster the courage to take off my gloves long enough to get any good pictures. I wish I would have though, she has some really nice sheep and has exceptional fleece on her girls............so nice, in fact, that I ended up bringing one of her girls home with me! Shocking, I know. Who would have thought that I would go to pick up one sheep and come home with two??? Probably anyone who has read my blog! Unfortunately, I have a husband that is an enabler, he doesn't even so much as give me a raised eyebrow when I start getting that "but I don't have one this color" look in my eyes. So now I do have one in this color...She is a beautiful fawn katmoget with the yummiest fleece ever. BTW, Lori is also an enabler (and a lot of fun too), so clearly it is not my fault that I brought home an extra sheepie. Hmmmm, last year when I was at Lori's I brought two sheepies home also... but that time it was my sister Marie's fault, I went to pick up Daisy, and Marie decided to get Lilly to keep at our farm as her pet (Marie lives in town). So really it is not me that has a sheep hoarding problem, it is just the company that I keep.
I am so happy to have my pretty little katmoget girl, I will try to post pictures soon, but it has not been a picture taking sort of day.


Like much of the Midwest today, most of Iowa got socked with an ice storm. We started with freezing rain this morning and it has continued all day and is expected to go into the morning hours. Luckily the temperature is supposed to rise overnight so it should turn to just rain.


This is why it was a bad picture day. 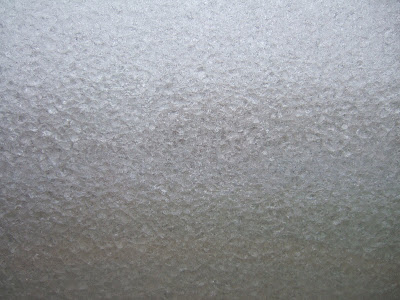 This is looking out our living room window.....no, we don't have that funky wavy bathroom glass in the living room, all of our windows were coated with ice. For that matter, everything was coated in ice. I must admit though, the "glass half full" part of me found it to be kind of pretty. My lavender blooms were encased in an icy shell. 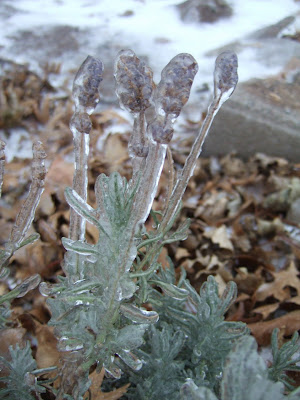 As were the pine cones, the grass, the leaves....you get the idea. 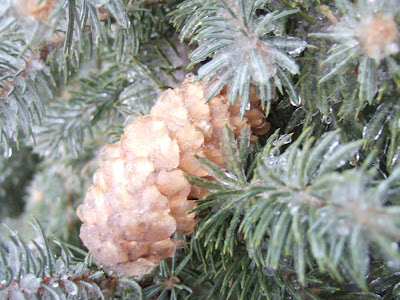 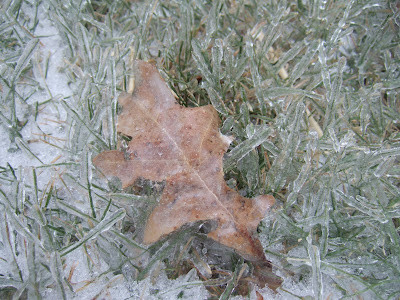 We had to do some hasty rearranging in the barns to make separate areas for the ewe lambs that are not being bred, from the big girls with their new handsome "beau" so that everyone could have a comfortable place to get out of the elements. Given the weather that we were dealing with today, it was no easy task. Carrying bales of straw from one barn to the other in 30 mile an hour winds, skating on iced over grass while being pelted with ice pellet missiles...not fun...especially when the bales acted as quasi sails, pulling me across said frozen grass, not necessarily in the direction in which I was intending to go. Gary and I did manage to get it done though, and everyone is now warm, cozy and dry. Some of the chickens made their way into the sheep barn to warm up....it seems as though "Ugly Betty" needed to warm up her feet. 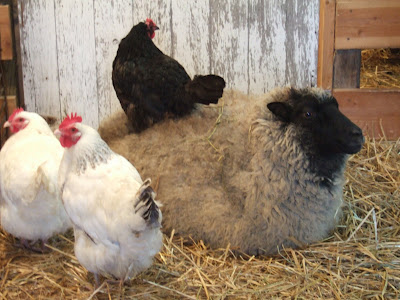 I normally try to keep the chickens out of the sheep barn, they have lots of other places to go, and I don't want chicken poo in my fleece. But today I let everyone go where ever they could get warm...and I guess that if I were trying to get warm, Willow's fleece would be the first place that I would go too.


I suppose things could have been much worse, we only lost power for about an hour today....this is what happened in February when we had our last big ice storm. 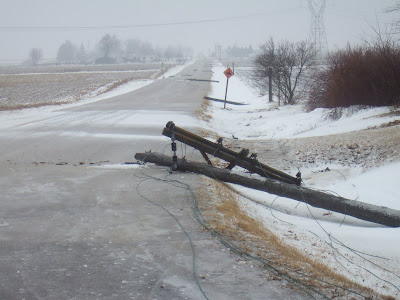 Yes, those are power poles snapped in half all the way down our gravel road. We were without power for 8 days, thankfully that didn't happen this time.

Loved your story! And yes, that ice is pretty -- but treacherous. We're having a windy and rain storm and could lose power ourselves -- and my folks are supposed to fly in tomorrow!

All of that missed us here in Missouri--thankfully. We still aren't over the big January Ice Storm we had this year. A certain way the rain falls, or crackle of limbs or the power going out makes chills go up my spine. We were without power for 13 days and it made a lasting impression! ha
Tammy