Have you kissed a llama today?

It occurred to me that I haven't done any real updates on Ande for a while. Oh, an occasional photo of him doing something cute, but nothing more. People always ask me about him, (probably because I posted graphic photos of his birth on this blog) a lot of people feel a connection to him.
It's hard to believe that he is almost 6 months old now. It sometimes seems as though he should still be that gangly, newborn conglomeration of legs and ears. But like all babies, he is growing. Since I see him everyday, sometimes the gradual changes as he matures go unnoticed. But today I glanced over and saw him standing next to Momma Llama and I came to the realization that he is now nearly as tall as she is, and he doesn't look like a little cria anymore, he is taking on a much more regal appearance. Thankfully, the one way he is not growing........his "manly" parts are still very tiny. llamas mature pretty slowly in that department, so we have a bit more time before the removal of the dingle berries, but it will be done. Then we won't have to worry about aggression as he gets older.......plus then there won't be any shenanigans with Momma Llama.....sorry, I don't know why I went there.
There are certain questions that everyone asks about llamas, so I will try to provide answers that pertain to my llamas specifically (your individual results may vary):
No, he won't spit at you! Really! Llamas generally spit at other llamas (occasionally at my sheep if they get between said llama and a flake of hay). That being said, like any animal, if they are mishandled or raised to think that they don't need to respect you, then you can expect a big, gooey, green, gob of cheek stench to be hurled into your eye.
UH, nooooo, you can't ride him! NO, not even a little bit! Seriously, why would you even ask that?
What is that big pile of jelly beans in your pasture, you ask? Well, for those of you who are not familiar, llamas tend to "go" in a community pile, and yes, they do look like (black) jelly beans. One big pile makes for a much easier cleanup (yeah). They could teach our dogs a thing or two...when the last round of snow melted, Gary went on a scavenger hunt of sorts, wandering the property until he gathered 6 bags of doggy surprises out of the yard.
What noise do they make? Llamas are generally quiet gentle creatures. They will sound a shrill "alarm" if there is some perceived threat, which mine have never done, probably because they lead a pretty cushy life and don't really have anything to be concerned about. But, they do communicate with each other with quiet humming. Ande hums to us when he is happy to see us, or sometimes when he is nervous. After we had our first winter storm this year, seeing the ice and snow covered ground, Ande didn't want to come out of the barn. After a LOT of coaxing, I finally got him to follow me out. His nose immediately went to the ground, curiously touching the snow and humming. With his nose on the ground all the way across the pasture as he walked beside me, he said "Hmmmmmmm Hummmmmmmmmm". Translation, " Ohhhhhh, I dunnooooooo, I don't likeee thisss".
One of my favorite things about my little camelid is that he runs up to the fence to welcome everyone to our farm like some kind of overzealous Walmart greeter. He also loves to give kisses. Yup! You heard me. If you lean toward him with your nose, he will reach his nose to you and wiggle his lips and nose on your face and hum. It's not nearly as kinky as it sounds. I have even made my big, burly, farmer friends lean over and give him a kiss. They protest at first, but then they giggle like little girls. They like it.
Okay, watch Ande grow. 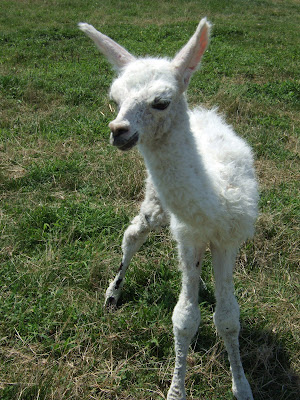 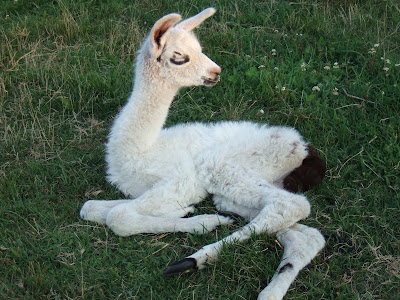 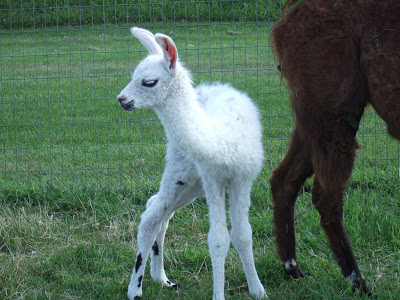 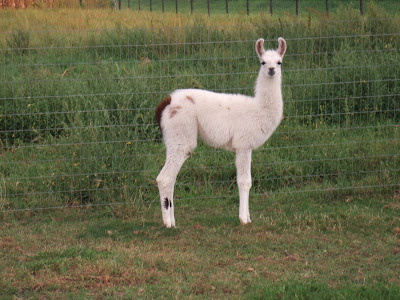 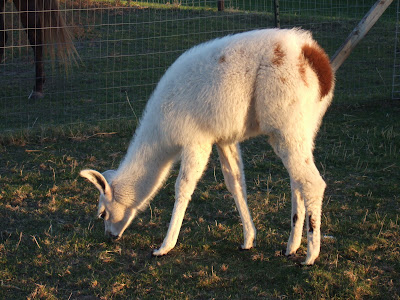 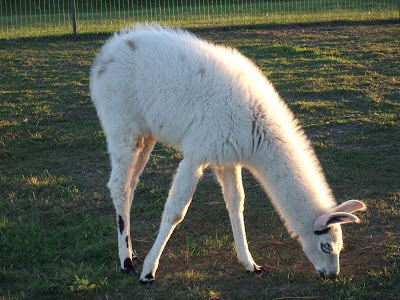 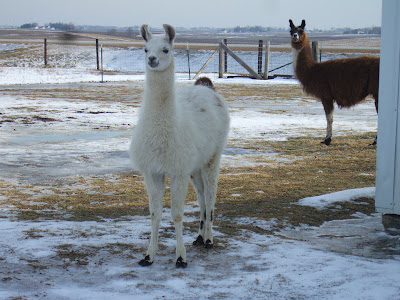 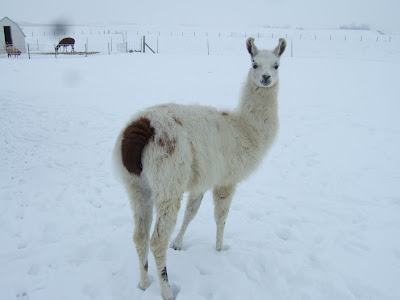 What is with the brown tail??? 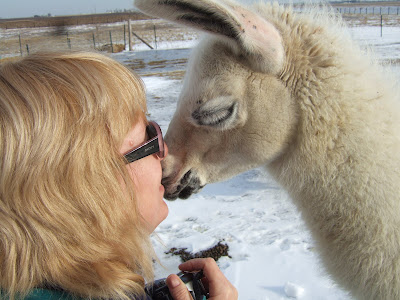 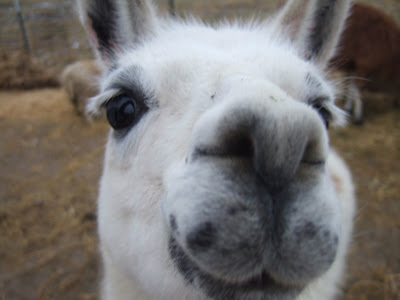 I very much enjoyed your post about Ande and llamas. I must say, though, that Ande looks like he has a great big TURD stuck on his bottom!

and I also realized...I don't THINK I've ever pet him. I got close to him once, but mamma llama got all "mamma llama" (that's harder to type than you might guess) and I gave her the stinkeye. But she was giving Zach a little stinkeye, so I stinkeye'd her right back. ...she started it.

She probably doesn't approve of Ande hanging out with the likes of me....

(actually, I think zach used to make them nervous. He's like the people version of sheep, freakishly small to a llama with no apparent reason why)

AAAAaaaawwwwwwww!!! He's so CUTE!
His fiber looks very soft too. Do you blend your llama with your Shetland wool?

Nancy, his fiber is REALLY soft. Not a lot of crimp but lots of luster. I am thinking of blending it with one of Rocky's boy's fleece this year...Elizabeth B. is getting Rocky's otherwise I would use his ;).