Where, oh where has my gulmoget gone?

It has been pretty chilly here, just like most of the rest of the country. Friday's actual temperature was minus 10 with a wind chill that I don't even want to discuss. But today's high was 50 degrees above zero, yippe skipee! Yesterday started the warming trend with temperatures rising to somewhere around 40, and it was finally comfortable enough to spend most of the day with my critters without my appendages freezing and falling off.

Since it was warmer and not windy yesterday morning, there was all this fun, feathery, frosty stuff on everything.......kind of like the inside of the old freezers that we were supposed to defrost and I never did. 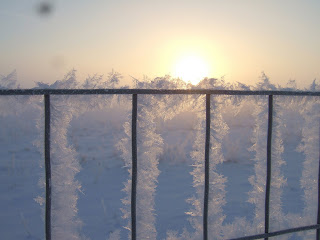 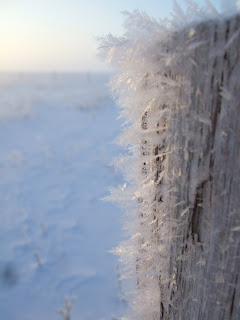 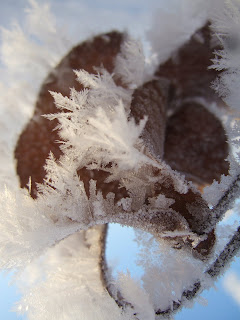 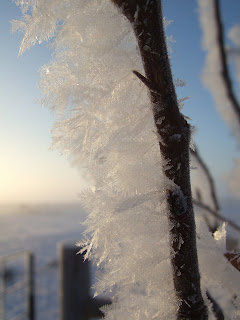 As I was looking up the forecast, I came across this calendar of sunrise and sunset times. So there is proof, right there, documented evidence, that yes, the days are getting longer. We knew that they were, but sometimes, in January you like to see these things in black and white.

Anyway..... I spent a lot of time with "the boys" yesterday. Compared to the ewes, the rams and wethers are pretty neglected. With the cold weather that we have had recently, I have been just eyeballing them briefly twice a day when I throw them hay to make sure they are all upright and breathing, and adding straw to their shed when the temps really drop. So I wanted to take a closer look at everyone yesterday to check condition and fleece.

My gulmoget ram, Max, that started out with such striking markings, is fading to lighter and lighter shades of grey. He is Ag (fading) and he is going to look pretty peculiar after he is shorn. 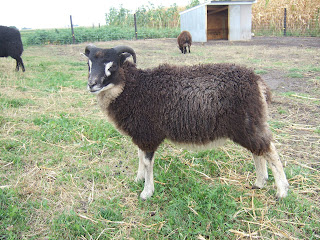 I think this photo was taken in October.

(Not the veggie matter, the color!) 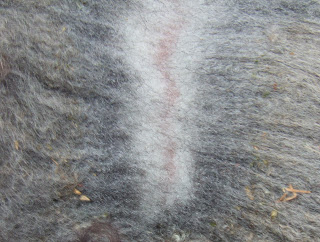 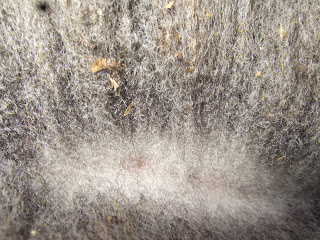 When he was born with such stunning color, I had hopes of using him on a couple of ewes next year, he has really great conformation and a nice little fluke tail that I would like to pass on. But It quickly became apparent that he was fading to grey, and I really don't want more Ag genetics in my flock since I primarily breed for spots.... I don't want my spots fading away. I don't have anything against Ag sheep, I even have a couple that I adore....I just love my spots too.

I am also keeping a close eye on his horn growth, there could be an issue with that too....time will tell, he is quite a bit younger than the other ram lambs.

Okay that's a picture of his tail...not his horns. 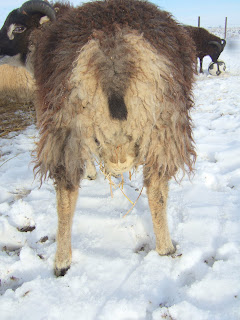 I spent some time with Rocky yesterday too, which I always love. Rocky is such a silly character. He is a very gentle wether, but he is definitely the boss of the boys right now since they are all youngsters. Every time one of the other boys gets close to me, Rockmiester has to place himself between me and the offender and push them away. That works great for me, since I want the intact rams to learn to keep a respectful distance.

Rocky also loves his tire. We weighted this tire and buried it half way in the ground so it is good for bashing or rubbing horns on. 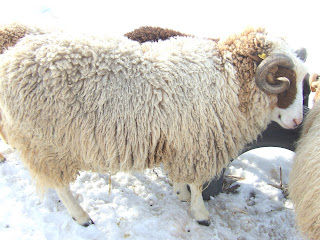 I wish that you could put your hands in this guys fleece! It is unbelievably soft and yummy.
Seriously, you need to feel this! 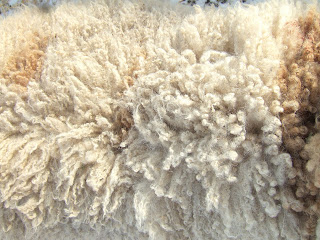 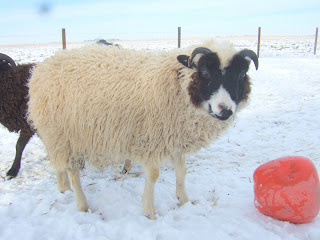 Diego is another very sweet wether, with incredibly nice fleece too......the "apple ball" is his toy of choice..... Why are my rams with the best fleece always the ones that I have to end up castrating??? 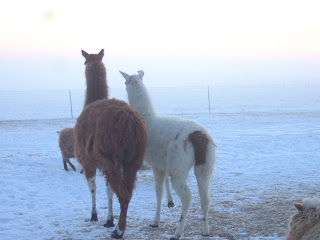 Momma Llama and Ande enjoyed the nice weather too.

Email ThisBlogThis!Share to TwitterShare to FacebookShare to Pinterest
Labels: rams

Oh noes! he's going gray! Get some of that just for men 5 minute hair color! all will be right with the world!

...except for the fact that you'd be giving your sheep dye jobs...and we'd have to send you away for a "vacation". a vacation with pills and group sessions.

I'd also like to add, I'm sad reading this, because I remember the 14 hours of that weather, it was fun. And now that we're back to freezing temps and harsh wind, it hurts a little.

Is that hoarfrost? I have never gotten to see that in person; it looks exquisite! Thanks for sharing it in photos.

What stunning frosts! We're sitting in awaiting a big dump of snow on the Lake District right now. We can see the sky growing dark!

I hope your gulmoget doesn't go too pale, he's stunning right now. My grey ewe hogg is looking as though she will end up very pale too :o(

'Morning Corinne! Grey or not, that Gulmoget is still stunning and will throw some lovely lambs! I can't believe Rocky's fleece!! I want some!!!!!!

Actually, I stopped by to tell you that I've nominated you and your blog for the "You Make My Day" award. You can pick up your button on my blog. I always enjoy seeing your posts and hearing about the goings on at Crosswind Farm.