Yesterday was the Superbowl, which I probably cared less about than the runway fashions in Milan. My people are not sporty..not even a little bit. We are the kind of people that get out of the way when a ball of any kind is being hurled toward us....maybe that would explain why I was never picked for any team activities in school....except maybe track...I can run, especially if someone is throwing a ball in my direction. I digress....Back to the Superbowl...I thought the Cardinals were a baseball team, so I was confused from the get go. Gary, on the other hand, is a sports fan and as such wanted to have a few people over for the game (you have fun with that honey). Saturday we picked up some snacks and started getting things ready for Sunday's game. As the day went on we noticed that it was getting quite cool in the house. We checked the thermostat and came to the realization that the furnace was dead. Again. For the second time in as many weeks. We called the repair company, only to be told that the technician was out of town and couldn't possibly be out to fix it until sometime on Sunday. You are thinking 'why don't they just call someone else?'. Well, that would be because when we had this guy out for the previous repair we paid the $90 service fee just for him to walk in the door and were told that if he had to come back within 30 days, he would waive that fee. Since it was a relatively warm weekend, we decided to tough it out and wait for him to come on Sunday rather than fork out another service call fee to someone else, and hope that it was warm before our company came.

Wow, that was a really long way to go for a pretty lame story....I get easily side tracked. My point was...it was pretty cold in the house, and in the interest of warming the place up, I baked. I made a banana tea ring, which I make fairly often, and then decided that, hey, I need to use up some pumpkin (for those of you that are new to my blog this might help explain). So I found a new recipe to try- Pumpkin Cranberry bread. Sounded yummy, but I can't ever leave recipes alone, I always like to tweak them. My children can attest to that. I remember my son coming home from school one day when he was in junior high, finding fresh cookies cooling on the rack, he excitedly asked me what kind they were...I think my reply was something like, "Oatmeal...but then I added some coconut..and some sunflower seeds, oh yeah and some cranberries", he looked at me and rolled his eyes and said, in the totally annoying way that only a 13-year-old can, "Gaaawwd, why can't we ever have normal cookies?". Thankfully he grew out of that.

Anyhoo, here is the altered version of the Pumpkin Cranberry bread recipe.

1/2 cup butter (sorry, I cannot condone the use of margarine..ever)

For topping; Beat butter and sugar until fluffy, add flour, mix until crumbly and sprinkle on top of batter before baking. Bake 60-65 minutes. 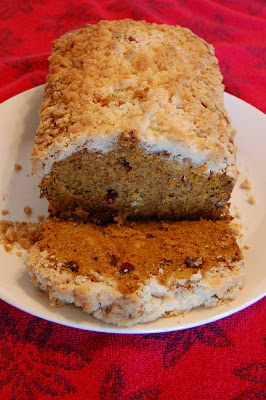 Let's just say we went through half of the banana bread and almost a whole pumpkin loaf before anyone even came over. What?? It was cold. We finally did get the furnace back on, just in time too, 'cause if I would have had to bake anymore, the 'fat pants' were gonna have to come out.

Since Gary and the 'sporty people' were watching the game, sister Marie and crafty niece, Sarah, came over to entertain me. Marie lives in town and has a pet sheep (Lilly) that she keeps here at the farm. Last year I saved some of Lilly's fleece after shearing and wanted to do something special with it for Marie for Christmas. The problem with this being, I am a shepherd who has minimal spinning skills and I don't even know how to knit...here is where crafty Sarah came in. I bought a pattern for making felted sheep, that Sarah was kind enough to knit up for me using Lilly's fleece. We felted it here and I stuffed it (yeah, I'm super talented). Then, since Lilly has white on her face and white socks, I took some of Ande's fleece and used a felting tool to put the proper spots on her. I never did get around to putting eyes on the darn thing before I gave it to Marie, so she brought it over on Sunday and we finally got it finished...except for adding a bow. 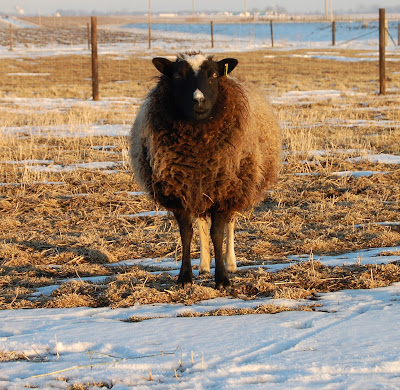 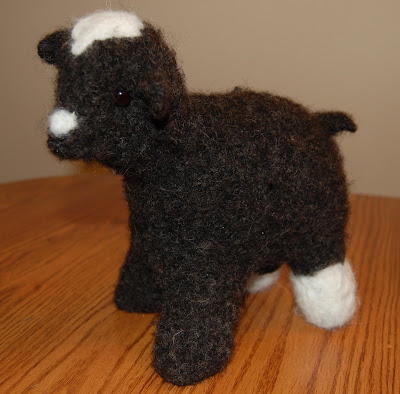 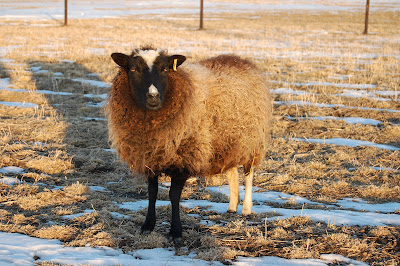 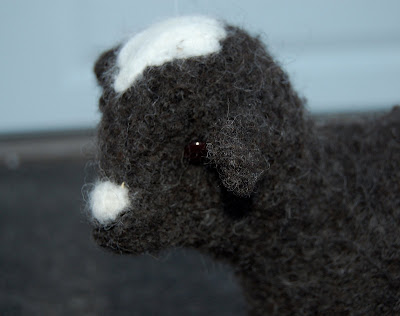 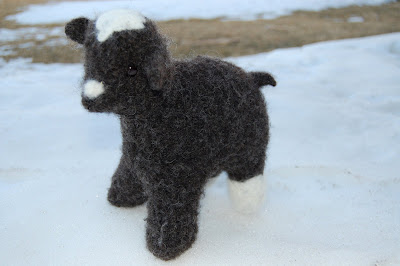 Awww super cute! Glad you got the heat back on in time!

Pumpkin cranberry bread,huh?? Looks like a winner to me ..... but I am already in the "fat pants".

I'm tired of wrapping up in blankets like a mummy to stay warm!!!!

The lamb is adorable. Too cute.

Lilly might be the one wearing some fat pants there! Wow, she is healthy!

And yes, I'm going to file that recipe for next years harvest of pumpkin. Sounds ever so delicious.

The felted Lilly is too cute! Good job was done by all. :-) I had to laugh at your Super Bowl comments. I pretty much know nothing and do not care to know anything about sports. (All three of us children were a sorry dissapointment for my athletic mom). However, I have been placed in a mine field of sports aholics where I work, and so frequently zone out and look glassy eyed. I did perk up when I heard something about 'combine' ---hey field work talk! But no... It was something sporty and we were obviously not on the same page in that discussion. I thought the Cardinals were baseball too! Huh... Anyway..thanks for the laugh.
Tammy

I thought the same thing about the Cardinals when I heard who was in the SuperBowl! :)

Your felt Lilly is adorable...good job!

We don't watch the superbowl either. We are as unsporty as it gets. Sport for us is chasing a loose goat around the farmyard, or trying to catch an errant chicken.

Love the felted Lilly. Super! And a particularly excellent job on the stuffing aspect.

OMG, you crack me up!! I wish I could have been there with you and Marie and Sarah!

I absolutely love your knitted felted sheep! I've made several with the same pattern and have always been "going to" make some with spots. Now I'm really motivated ~ that's adorable!!

ok that sheep is cute. even for a guy.

i love the way you make food. can you send me recipe's please? sweets are still my downfall even though i've cut out ALL soda, and deep fried food. and almost all white flour/sugar/bread/rice etc and gone to the multigrain or wheat versions.

My mouth is already watering for jefferson....:)