The Leghorn chicks that I added to our menagerie are now about two weeks old and are starting to feather out. They have been doing very well with their adoptive mothers and growing like weeds. Yesterday I decided that it was time to move the mamas and babies in with the "general population". This was something that I was experiencing great anxiety about. Up until now, I have always gotten chicks from a hatchery and reared them in the safety of a separate enclosure for months until they were large enough to handle being in with the "big girls". I have seen how awful some of my more dominant hens can be to the more submissive ones and was quite worried about putting these little guys in with the rest of the group. So, with much trepidation, I took Annie, my Buff Orpington hen, and her little charges and released them into the outside run. The other hens immediately came running over to see what all the excitement was....incidentally, if you have never seen a hen run, you don't know what you are missing...it is somewhat reminiscent of a pioneer woman gathering up the layers of her prairie dress and running with her little pantaloons in full view.....I digress. Once the offending hens entered the area that Annie had deemed a 'no fly zone' for her and her chicks, she let them know in no uncertain terms how this was all going to play out. Hackles up, wings spread, she went at them with everything she had....and she's kind of a big girl, so what she had was plenty!

This hen got a bit too close and not only lost a few feathers off the top of her head for her indiscretion, but was forced to bow down submissively until Annie felt that she had sufficiently paid for her crime. If you look closely you can see bits of feather in her beak. 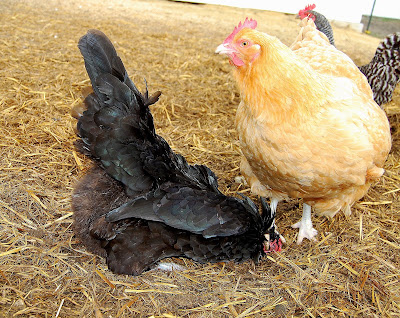 For some unknown reason, after that incident, the other hens gave a wide berth to Annie and her brood. OK, I thought to myself, this is going well. I thought it would probably be safe now to introduce Elvira with her chicks to the group. I put Elvira, and company, carefully into the run next. Everything looked like it was going great...that is, until Annie noticed that there were some chicks way over there...with that other hen! Annie came dashing across as fast as her little legs could go (while holding up a prairie dress), and once she reached her destination, she firmly scolded Elvira for her perceived wrongdoing and proceeded to round up ALL of the chicks and took them as her own. Hmmm, this is not how I wanted this to go. Elvira protested and called to her chicks (who at this point were having a bit of an identity crisis). I was having a bit of an identification crisis of my own....all of the chicks were from the same hatch, same breed, with similar markings...I had NO idea who belonged to whom. I knew that Annie would try to take care of them all, but ten chicks is a lot for one mama to look after. I watched for a while and as time went on, things calmed down and Annie allowed Elvira to co-parent with her. Annie would look after the immediate needs of the babies and Elvira would stay on the outskirts chasing off any interlopers that became too inquisitive. Finally, after a few hours, Elvira's chicks started to wander back to her, and by late in the day everyone was back to their rightful adoptive mothers. Annie was then content with her six, and was keeping them very close. Can you see three of the chicks poking out? 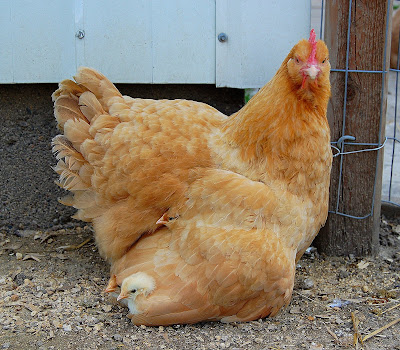 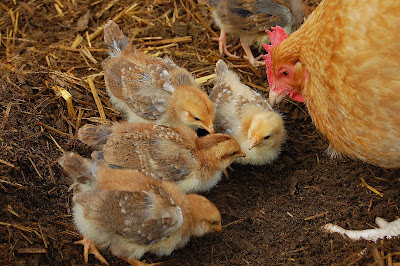 Elvira was taking no chances this time. She was going to keep her babies REALLY close. 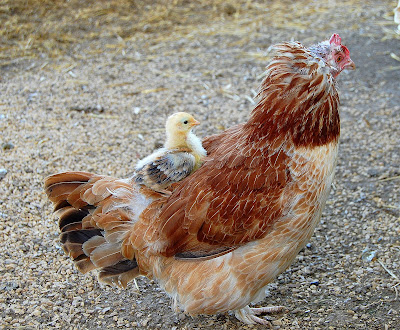 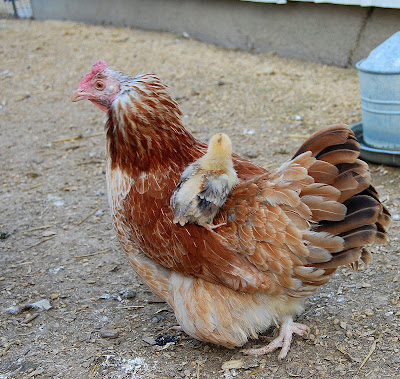 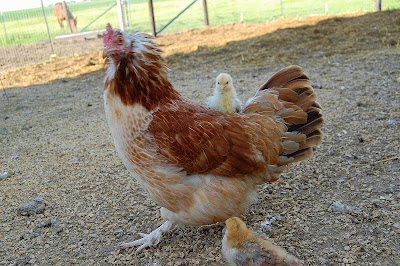 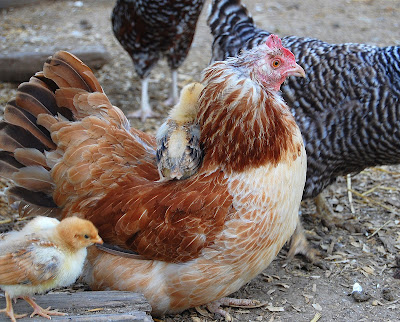 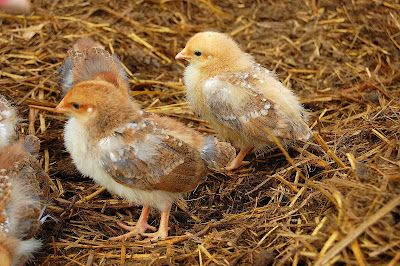 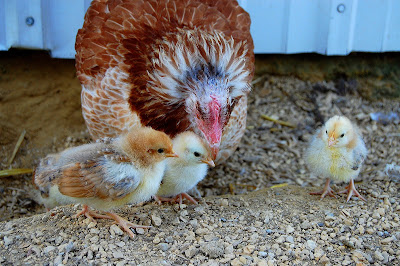 Oh my gosh Corinne...if you had a live cam on these chickie families I think I would have to watch them 24/7. I am SO fascinated by it all!
Great story--great pics--great blog as always!
I can't believe it's been 2 weeks!! And I can't believe it's all working--so cool! Chickens actually take care of chicks--who would have thought?
I had been wondering how it all was shaking out. Thanks for the update! Keep it coming :)

What kind of hen is Elvira again? She has a unique head/upper neck; pretty colors, too.

Not a lot cuter in the poultry world than babies sittin' on mommas back :)

Those are awesome chicken photos! I love the prairie dress description! This is my first summer with adult hens and I am learning a lot about "chicken" ways and humor....like when they totally freaked out on 2 mice in the coop....that was like chickens gone wild! Thanks for a great read:)

your chickens have way more personality than mine do! My other hens (OEGB) actually killed the other chicks if they strayed too far from momma......they must have been jealous but still!

I'm glad everything worked out ok :) and the piggy back...err...chicken back? made me nearly spill my green tea! too funny!

ROTFL! I'll never be able to watch my hens run without thinking of Caroline Ingalls again.

Thank you for sharing that. I love birds and momma birds specially. Love that the girls were able to work it out. Please share more pictures, and tales of the birds.

What lovely pictures Corinne. I am glad it all worked out well in the end. I am learning how much fun it is to watch chicken hierarchy and antics.

You make me want more chickens...

What a riot! I know you had to be torn between worrying and laughing at their antics. The chicks are gorgeous, and their mamas are pretty special, too. Thanks for the look into your farm.

I just love the chicks and chicken mamas. :) I am pretty sure that next spring I will let some of mine go broody and hatch their own and I can't wait.

I do wish I had more time to just watch all my animals, though. Or at least more time to watch the non-human animals. :)