Today the last one of this year's ewe lambs-well, that is to say, the last one that I am not hoarding for myself-went to her new home. Gary and I loaded up the truck this morning with my ewe lamb, Bayberry, and three lambs from Sommarang Farm that also needed a ride in the same direction. Sorry for the foggy photo, Bayberry decided to kiss the lense right before I took the picture. 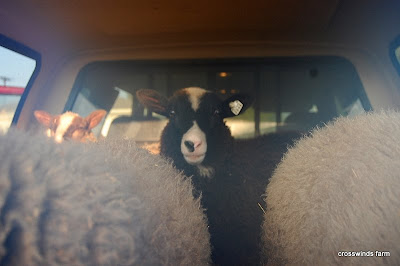 It is always hard to see the lambs go, but it is especially hard when they are as sweet and friendly as Bayberry is, and even harder when they are the last of the 'for sale' lambs to leave. The longer they spend at the farm the more I get attached. Bayberry was sold as a pet because she initially had a very slight underbite which is an automatic 'no register', her tail is also longer than I like to see in my Shetlands, but that was a moot point with the bite issue. Of course, by weaning time I had already promised  her to a great 'pet only' home, aaaand her bite straightened out, it also became apparent that she is modified and will have beautiful shaela (dark steel grey) fleece.
So with sheep loaded in the truck, we set out for Des Moines....yes, another trip across Interstate 80...at least this time of year the corn is changing color...which makes the trip much more scenic.
It was going to be 87 degrees today with higher humidity, so even though we were leaving early in the morning, and we had the screens open on the topper of the truck for ventilation for the lambs, I was still worried about them being too warm, so we opened the little window between the cab of the truck and the back where the sheep were riding. The window is not big enough for the sheep to try to squeeze through, but it is big enough to let a little air flow from the cab stream back.....not cold air mind you, I have no air-conditioning in my truck so it was whatever temperature the wind provided. We were sweating like pigs up front, but I am pretty sure the lambies were comfy.
And, as if I didn't feel bad enough taking Bayberry away, THESE are the looks that I got every time I glanced over my shoulder to see how Bayberry and friends were doing in the back- 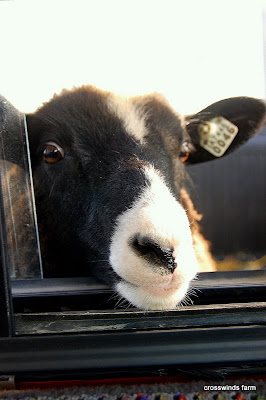 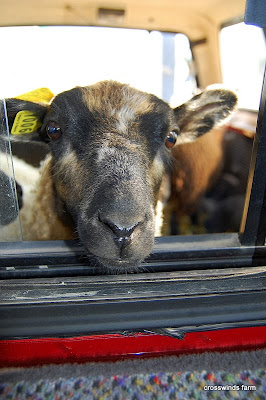 For the most part the lambs lay quietly for the ride with the exception of an occasional "BAAaaaa" from Bayberry, unfortunately she inherited her mama's baa which sounds a bit like someone losing their lunch. We made one stop East of Des Moines to deliver the Sommarang Farm ewe lamb to Deb, who has a small, but growing, flock of Shetlands, and then continued on to the West side of Des Moines with the rest of our charges where we met two of the nicest young women, Meg and Hannah. Hannah is Bayberry's new owner, and apparently Bayberry knew that because she instantly bonded with Hannah. 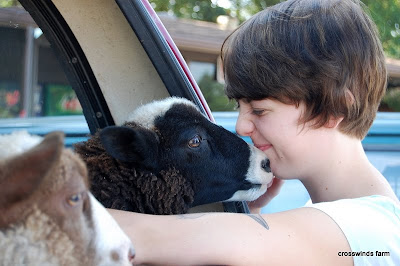 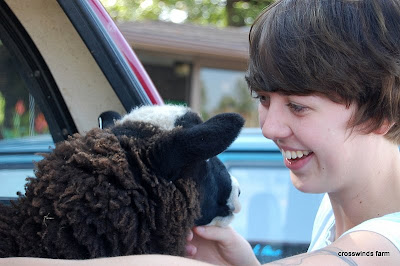 Meg got the two gorgeous, friendly wethers. It seems as though Meg was camera shy because I only got a couple of pictures of her. Here we are loading up her vehicle with sheepies.....we look like we were all talking at the same time...maybe we were trying to distract the on-lookers at the rest stop.....as my husband so helpfully stood there and took pictures-thanks Honey! 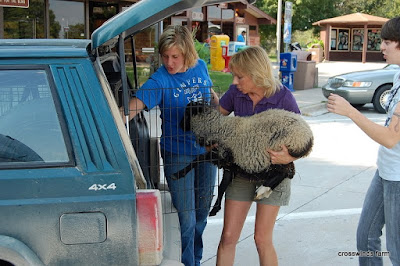 The sheep eventually got loaded and the girls were ready to go. 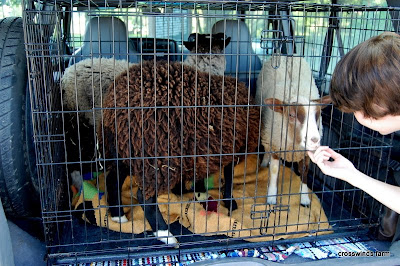 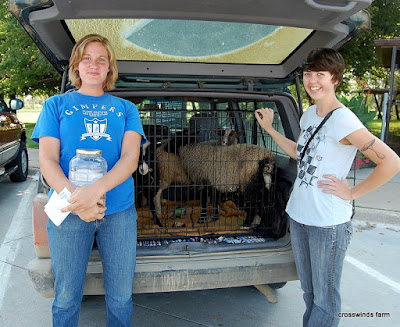 Yeah, Bayberry is not making me feel guilty at all. 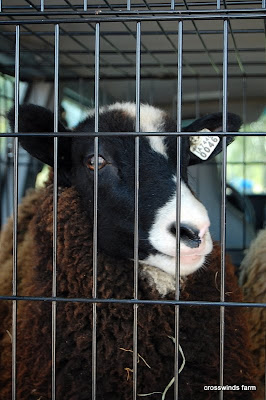 Here are some baby pics of Bayberry.
Not sure why, but she looks very surprised or worried in this baby photo. 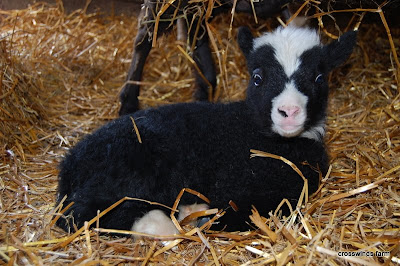 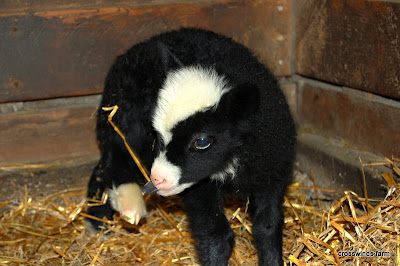 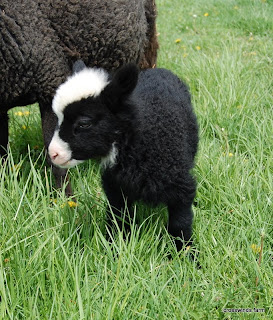 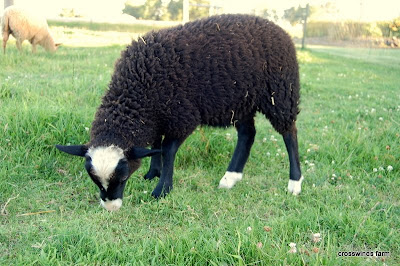 Yeah, I've had to wait to see how some bites ended up, too; once until adult teeth came in! (Fine, thank-you.) At least you found great homes for everyone; I'm still needing to place SEVERAL!

Bayberry is beautiful! I like the photograph of her with her new mom!

Phewww...I got all choked up reading that. But it looks like sweetie pie Bayberry went to a great pet home. Gimme one of those "unregisterable pets" next year, Corinne. = )

aw, you made me get all teary eyed too!
bayberry is beautiful and so is her new owner

aw, big hugs--but if you kept them all you couldn't have more baby lambies next year for us to ooh and ahh over
(unless you buy a bigger farm....hmmm...)

do you have a "regular" camera or a fancy dancy one?
if it's regular let me know which one--i'm in the market unfortunately

awwww. Meg looks very pleased to have her new sheep and they are all so lovely. We haven't bred any sheep for sale (yet) but do breed english angora's... I always have second thoughts about selling them hoping they have gone to the right place, but it always seems to work out just fine! :) It is hard though.

Oh, Corrine! How COULD you?

I haven't misjudged a bit but I do have a ram lamb (and a ewe lamb) that I lowered the price on because I thought their tail was too long and now the tails are just fine...

Oh well, at least we found them good homes...

I want to come see you and your flock!

A Brit in Tennessee said...

You raise the most beautiful of creatures...Shetland Sheep.
Bayberry looks so special, I'm hoping they'll be sending pictures your way, and you can follow his journey.
What gorgeous sheep !!