Fall weather has definitely arrived here in Eastern Iowa, and the crisp temperatures keep reminding me of all the projects that need my attention before the dreaded S-word starts falling. Come on you guys, I meant SNOW!

The weather has been fickle lately, to say the least, which makes it awfully hard to plan things, but it does make for some very interesting, and beautiful, Autumn skies. 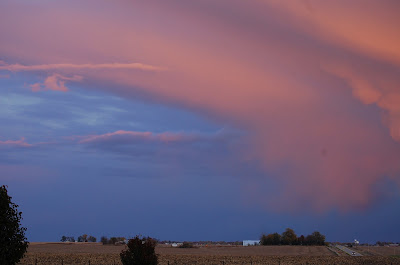 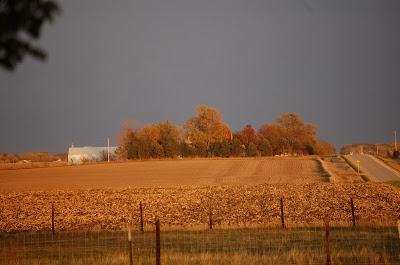 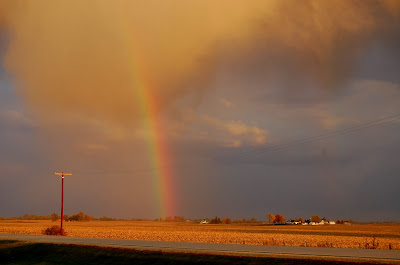 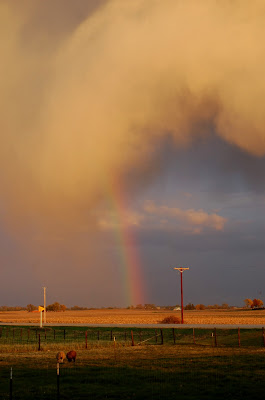 The Squmpkins have been harvested, and for those of you who inquired as to the contents, they did end up assuming more of the pumpkin characteristics than the squash. The outer skin even started to take on a bit of an orange cast a few weeks after harvest, and by all accounts, they were delicious! 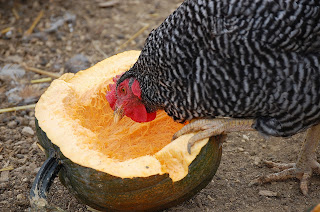 With the new batch of chicks growing like crazy, one of the projects on the 'to do' list was to get the small chicken coop fixed up to use as a brooder house. The coop is ancient, it was here when we bought the place, and it was in extreme disrepair at the time. We debated on whether we even wanted to bother keeping the old eye sore, but, in the end decided it was worth salvaging. We have patched it over the years, put a new roof on it a couple of years ago, and finally decided this year to put all new siding to finish it up.
We started working on it over the weekend, and got it completely done - except for adding a window....my husband doesn't know that he will be doing that in the spring. Also, unbeknownst to him, he will be adding window box...and a barn quilt over the door. I neglected to mention that I wanted those things at the time because couple-bonding over home improvement projects with power tools can sometimes end badly, so it is best to get the basic necessities done without bloodshed before mentioning the extras.
This is the back side. 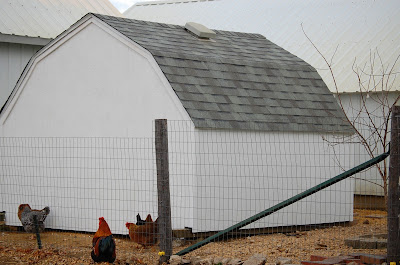 I wanted to paint it something other than white, but we had white paint, so it's white. Don't tell my husband, but we will be painting it a different color in the spring too.
This is the front of the coop. We had a lot of volunteer building inspectors making sure we did an adequate job. In fact, some of them were such good helpers that they now have white paint speckles on their feathers. 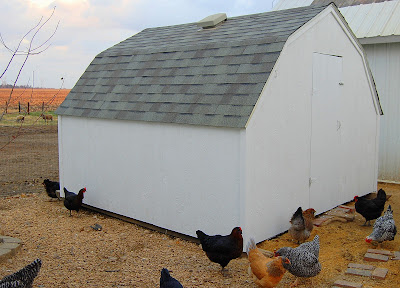 There is ventilation all the way around the building, and there is a screen door to let the fresh air in on warm days, but for now the chicks are closed in because they still need the heat lamps and a draft-free environment. Once they are big enough, they will run free with the big girls.
The chicks have lots of things to keep them busy in their new home. For one thing, they been mastering the fine art of roosting. They have been doing pretty well, but it is still a challenge for some of them to keep their balance. 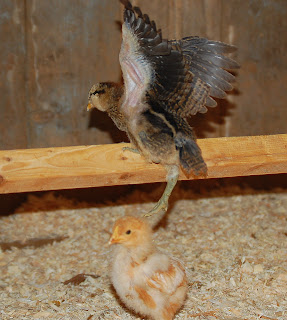 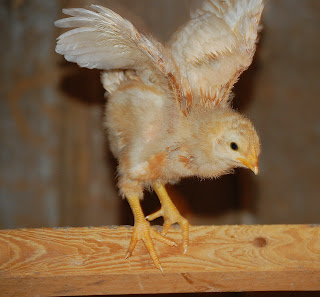 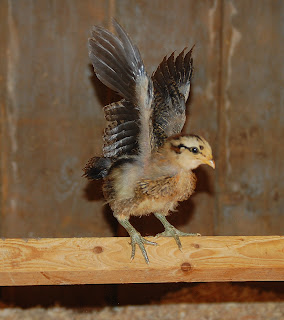 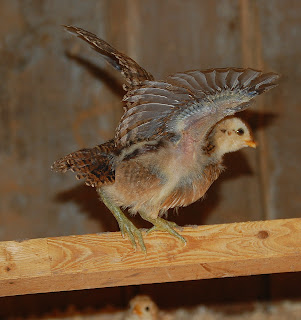 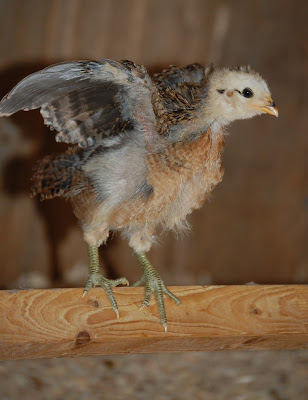 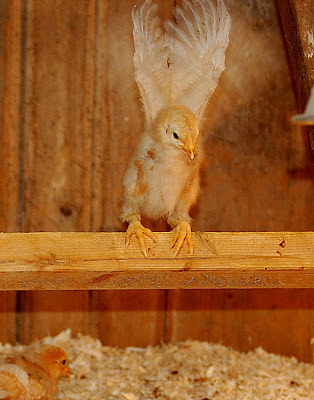 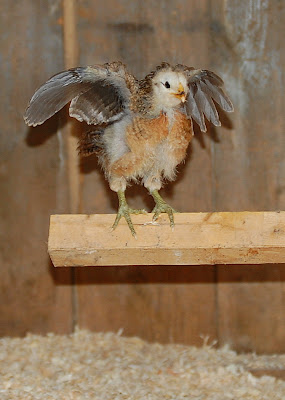 The little Egyptian Fayoumis is looking, well, Fayoumis-y. Hopefully it isn't a rooster, and hopefully, it doesn't live up to the breed's wild reputation. 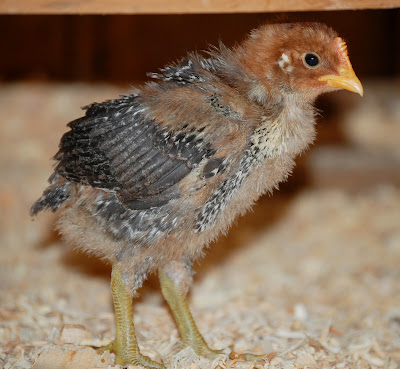 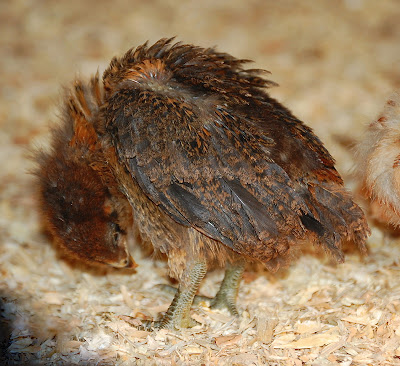 "OH MY GOSH! OH MY GOSH! LOOK! Not to change the subject here, but does anyone else have green legs???" 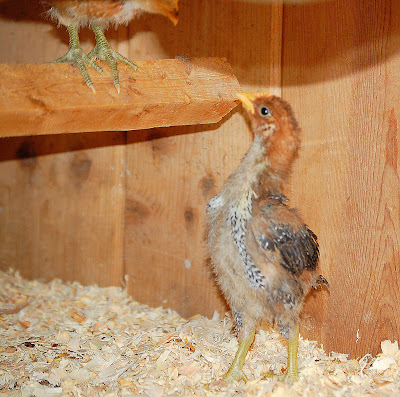 I love those green shanks! It really is fall, isn't it? I know I"m not ready for winter weather yet. I'm hoping this coming weekend will let me get a lot done. I love the coop.

Gorgeous sky photos Carrine! They almostlook too stunning to be photographs.

Your baby chicks are growing fast. I wonder if I'll get more chickens. I probably better wait and see how my newest adventure goes first...

Oh my; your "small chicken coop" makes our little henhouse look like a long-abandoned outhouse!

Hey Corinne, it's your city friend! :)

I love this post--especially the construction. Oh dear, hubby really is sort of in the dark about the "actual" hen house plans,eh?

Your chicks are super cute, even the green-legged baby!

Hope you are enjoying Fall!

I had been thinking, those are sturdy looking legs. I'm used to seeing very thin legs from following whooping crane news.

Now I'm thinking about the legs of horses looking like they really need to be about 4 times as sturdy.

Sheepie -- as always -- your pics are beautiful.

LOL, yes it's always best to wait until the power tools are safely put away.

cute, cute photos. Love those baby chicks. I love that you gave them little roosts to roost on. Coop looks great!