I kind of left you hanging, didn't I?

I was so happy to finish lambing and to be able to catch up on my sleep, that I forgot to update you on the rest of the story!
So, when we chatted last, I think we were up to 11 lambs? Up until that point we were staying pretty even with rams and ewes, but somewhere along the way we got a little ram-heavy. The final tally is 16 lambs-10 rams, 6 ewes.

So here's what you've missed.
Mira, a gulmoget ewe who has virtually no spots in her pedigree, and has only had single lambs of either solid or gulmoget pattern, surprised me by not only having twins for the first time, but really astonished me with these spotted, gulmoget boys. 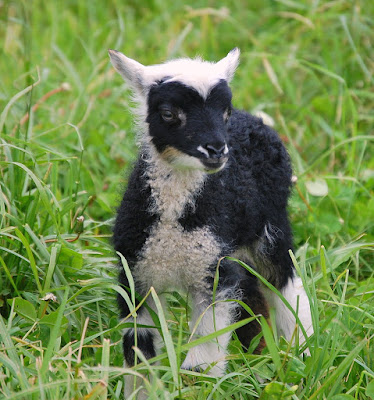 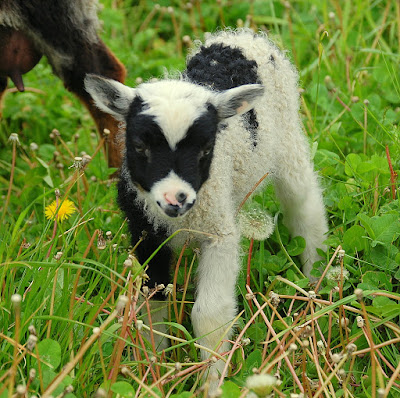 I don't normally keep a bunch of rams, but......I really got some nice rammy lambies this year. We'll have to see what fleece and horns look like in a few months. The boys really stole the show this year. 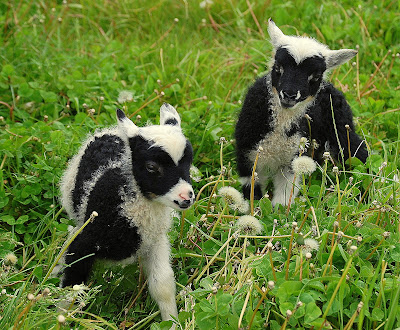 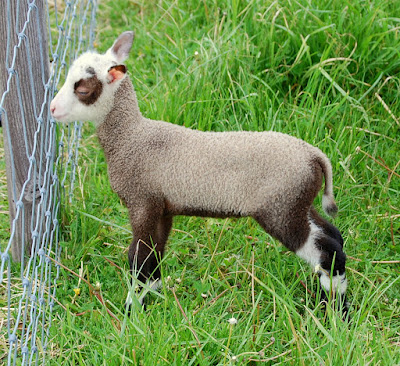 Even his head is crimpy! 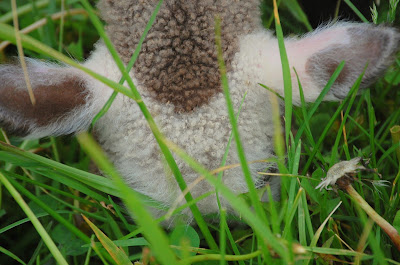 This is her moorit ram (below). At first glance I was a bit disappointed in his fleece, but upon closer inspection, I discovered that he is super-crimpy under his birth coat....and yes, for those of you that giggled about the 'purse' mentioned in the last post, his purse is very crimpy...thanks for asking!
So far this guy doesn't have much of anything as far as horns, just little flat patches. Both boys are likely half polls. The moorit may be fully polled. 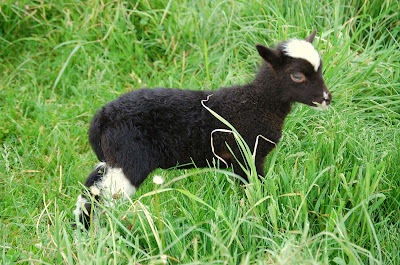 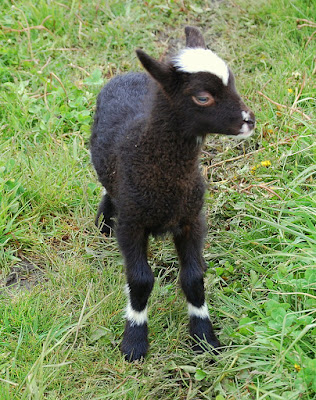 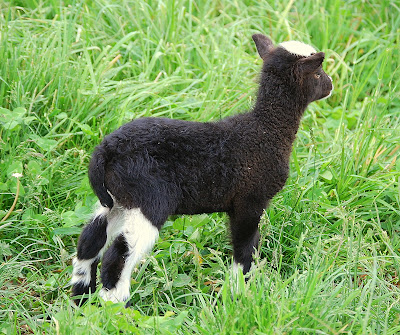 The last lamb born was a ram lamb out of Lilly.
Lilly has always had twins, until last year when she had triplets. She was very large again and I fully expected at least twins from her. But this year, poor girl, she gave birth to a full grown Angus bull. This picture was taken when he was only hours old. He. Is. Huge! 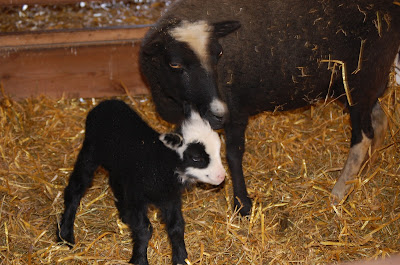 Here he is at two days of age. 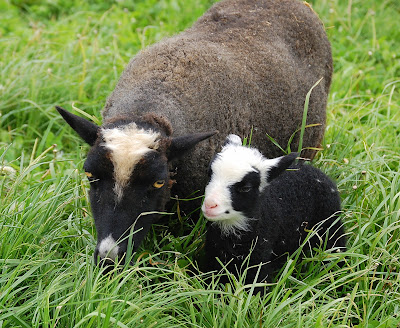 Here are more random lambie pictures.
This is Holly's ewe lamb...that will be living here...forever. 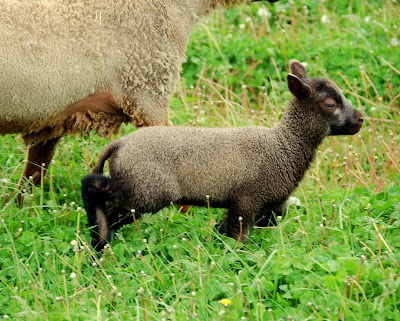 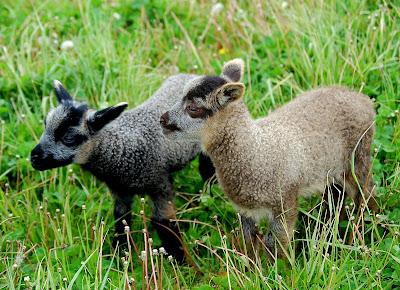 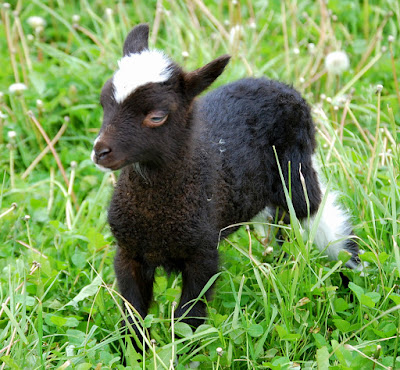 Below is Holly's gorgeous ram lamb. Sadly, he is teetering on the edge of losing his manhood and becoming a wether. Holly is still not making quite enough milk for both lambs, consequently, I have had to supplement him with a bottle a couple of times a day.  He is now quite friendly - not something I want to encourage in a potential breeding ram. His twin sister will not take the bottle and she was bigger to start with, so he became the bottle boy. He stays with the flock and he does still nurse from his mom, so I am hoping that her milk will catch up. It's kind of disappointing to think that a ram this nice might not get to pass on his genes, but if he can't be used for breeding he will be a lovely fiber pet. 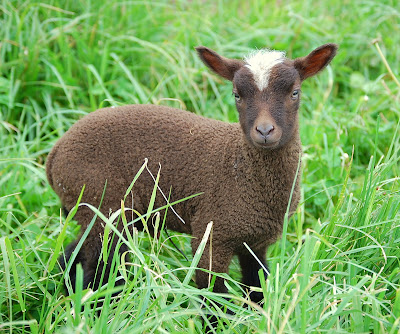 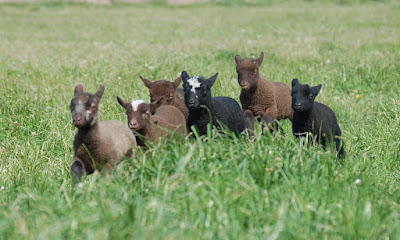 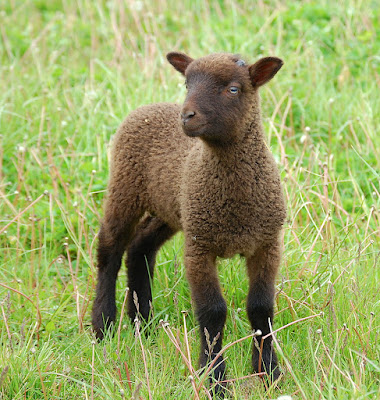 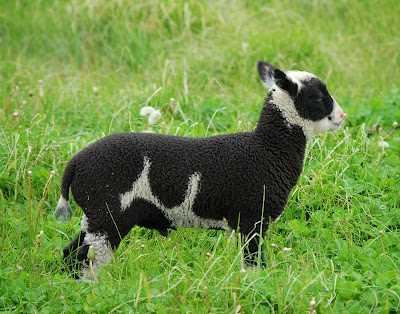 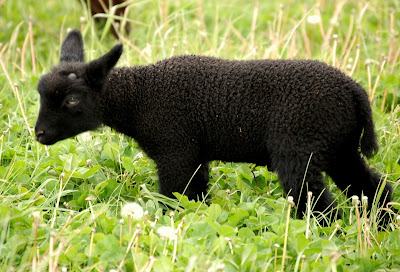 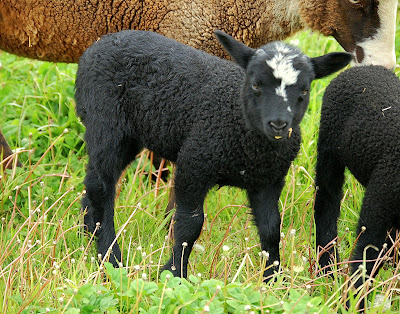 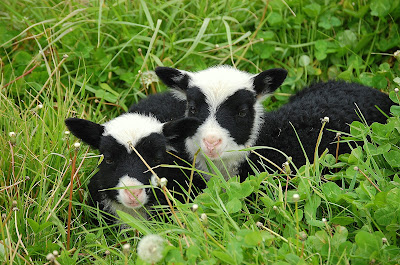 Menemsha's twins...I'm not sure why they always look angry. These are really nice lambs too. The ewe refuses to let the flashy spots of the rest of the lamb flock outshine her, so she compensates by being obnoxiously friendly. 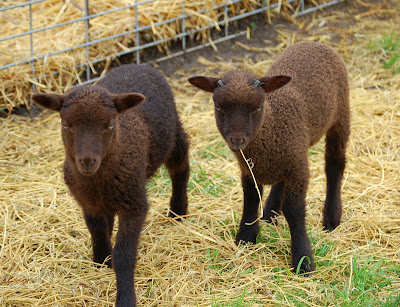 Now comes the hard part - waiting and watching them grow. I won't know for a while which lambs will be registerable, especially among the rams. I will watch to see how horns grow, what fleece looks like under those birth-coats, how bites are looking and whether the boys have all the appropriate equipment before deciding.

Holy CRAP have you got some awesome lambs! Makes me wish I was still breeding. I know where I'd go looking for a ram lamb...

Outstanding, Corrine. You have got to be so proud!

Great assortment of colors and markings. Nice photos, thanks for sharing.

Those spotty gulmogets are about the flashiest things I've ever seen - AWESOME!

Well worth the wait!

Those spotted Gulmogets are amazingly handsome! What character... :)

Wow those are some pretty awesome looking lambs. I'm with everyone else loving the spotty gulmoget boys. Congratulations on such a nice group of lambs again.

Holy smokes, I think you've outdone yourself this year my friend. Love the flash of the gully boys, but I'm really impressed with a few others as well.
Two thumbs up!!!

You have very lovely rams and ewe lambs this year! Love the spots!

Oh, to spin anyone of those fleeces!! They are all beautiful!!!

They are all gorgeous, but the one in the first photo is unbelievable.

Holly's ram lamb is going to be wethered because he's too friendly? Did I understand that right?