Well, I guess we have a lot to catch up on since my last post was in October of last year.
You thought I was dead, didn't you?

First things first though. I know that everyone is anxiously awaiting the arrival of the first lambs, myself included. Just in case you hadn't noticed, the lamb countdown gadget thingy is down to zero...ZERO..somebody needs to tell my ewes.
I have about 13 ewes that are bred. Two are due any day now, the rest are due starting around the first week in May.

Why two groups of lambs so far apart, you ask? Good question. Surprisingly there is a method to my madness.
Firstly, rams are busy folk and they have schedules to keep. I used two rams, one was a rent-a-ram, the other was one of mine that I sold, but I wanted to use him on a couple of ewes before he went to his new home. There was a lot of ram-schedule-juggling that had to be done in order for my ewes to get bred, and for the rams to get the job done at their own farms as well.
Secondly, one of the ewes in the early lambing group, Holly, was my problem child last year. Previous to last year she had always been a good mother, but last year she had twin lambs and did not produce enough milk for both lambs, so I ended up with a part-time bottle baby. I would not normally breed a ewe again that had issues with milk production, but since she never had problems before last year, and because she has great conformation and fleece, I am giving her this one last try at motherhood. Given her difficulties last year, I decided that it would be best if I timed breeding so that Holly, and just one other ewe, would lamb earlier than the rest. The timing will allow me a couple of weeks to deal with any potential problems with Holly before the rest of the crew is due in May. If I end up with a bottle lamb I will have time to get it off to a good start (and get some sleep myself) before the rest of the bouncing fluffballs start to arrive and demand all of my attention.

Lilly is the other ewe that is due aaaany time now. Her sides are beginning to look a little sunken in and her tail ligaments have started to loosen. With the exceptions of triplets in 2011, and a HUGE single last year, Lilly generally has twins and she looks like a good bet for twins again this year. 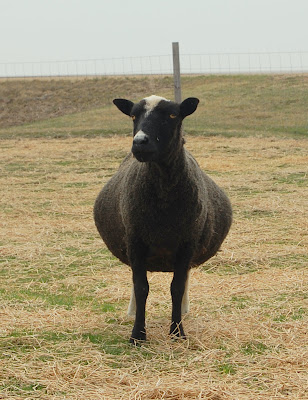 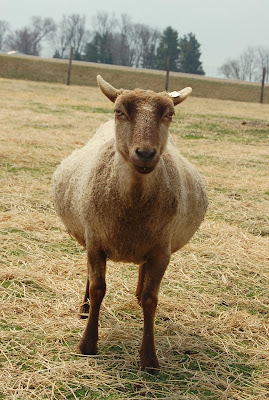 Lilly and Holly are both bred to Crosswinds San Diego.
Diego is a black, spotted gulmoget with great horns and nice fleece. He was one of my favorite lambs from last year. He now belongs to my friends, Craig and Cindy, from Whispering Winds Farm in Waverly, Iowa.. 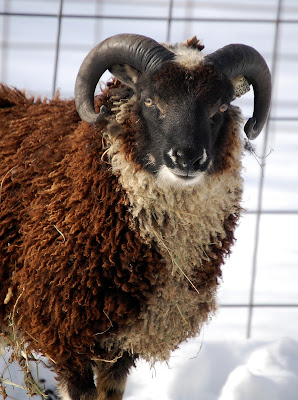 If my ewes cooperate, I will soon be bombarding you with lots of lamb pictures so I won't get too carried away with this post. We'll catch up on the other farm shenanigans later...hopefully you won't have to wait another 6 months!
Posted by Crosswinds Farm at 4/11/2013 08:56:00 PM

Glad to see you back! I was MIA for almost a year. I know. Shameful! You have some very 'heavy' mamas to be. I start lambing in May, also. I hope you have a good lambing season. Welcome back.

I hope we get photo bombed with lamb pictures soon! :) SO glad to see you posting!

Wow, that is one NICE ram! Why would you sell one like THAT?!?

Thanks for the welcome back, ladies!

Hi Michelle,
Thanks, for your comment about Diego. He is a nice ram, but he is related to so many of my ewes that it didn't make sense to keep him long-term.
I am keeping my fingers crossed that I get a nice lamb or two out of him to keep.:)

I concur with Michelle, very nice ram. I just had another lamb explosion at my place yesterday. I am exhausted!!! But it's a good kind of exhausted, right?
29 lambs so far and 10 ewes to go, at the risk of repeating myself, "What the H E double toothpicks was I thinking?" Psssttt.

I think they are waiting for real spring weather! So sweet those chubby ewes.