I was expecting my order of chickens to arrive today from Murray McMurray. The delivery date that they gave me was for today, but I was prepared even if they arrived early on Sunday. What, you ask? The United States postal service doesn't deliver on Sunday! Correct you are, but last time we ordered chicks we were also expecting a Monday delivery, so I felt safe going ahead with my plans to be in Wisconsin that weekend picking up sheep from Nancy Larsen. Sunday morning, on the way to Nancy's, I got a call from my husband, who was a mite panicked, telling me that the post office had called and wanted the chicks picked up. He was panicked because he had no idea what to do with a box of little peepers. After a bit of long distance instruction, he carried out his duties as a chicken nanny like a real trooper, and everyone was fine and healthy when I got back.
I was ready this time though. I had my baby pool all disinfected, filled with pine shavings, heat lamp at the appropriate distance, waterer was ready to be filled with sugar water and electrolytes, chick starter feed had been purchased. Ha! They won't catch me off guard on Sunday!

Soooo, Saturday evening as I was just getting ready to head up to bed (9:30- that's late in Iowa), our phone rang. When I picked up the phone a voice said (with a chorus of peeps in the background), "This is the Milan Illinois postal sorting station, I have a box of chicks here...would you like to come and get them?". Good thing my husband is a good sport, it's about a half an hour to the postal station. As we drove to the station, I couldn't help but wonder how many other middle aged couples were driving to a post office to pick up chicks (not that kind) on a Saturday night for fun. We know how to party.

This is how the little darlings came to us. 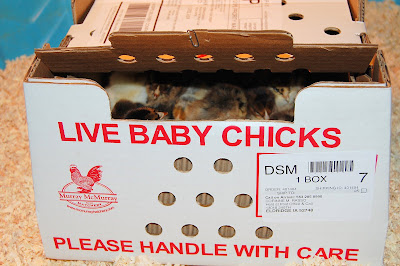 This is a Speckled Sussex chick....no names yet. 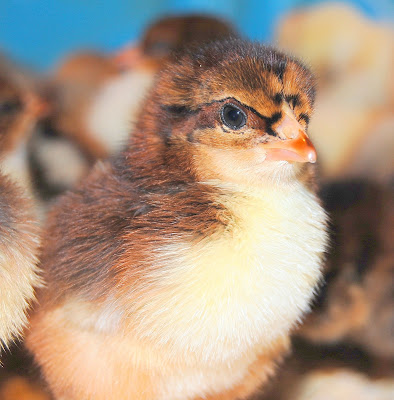 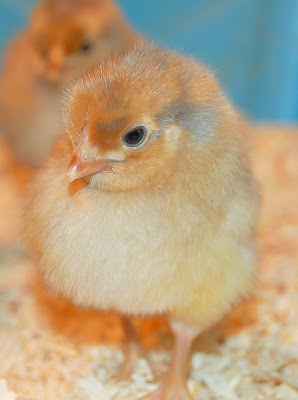 Above is a Blue Laced Red Wyandotte. 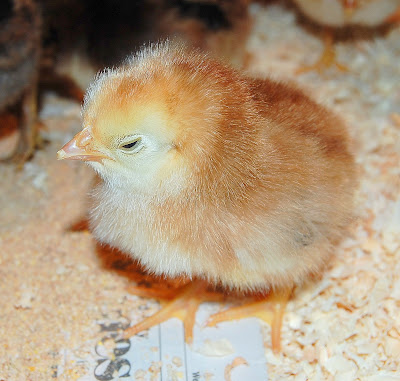 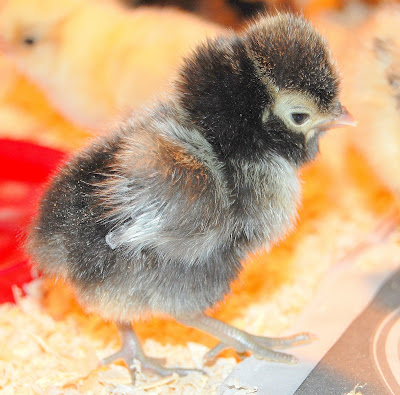 This little girl with the fancy hairdo is my sister's Silver Laced Polish chick...she is going to be an uppity city girl....Don't tell, she's not supposed to have chickens in town! 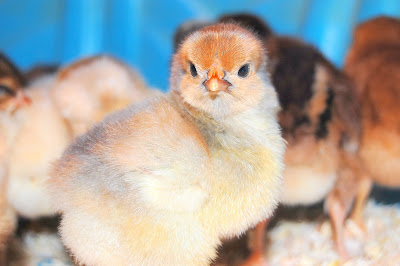 Another Blue Laced Red.
In all I ended up with 15 chicks from this hatchery....the reason I specify from this hatchery is because I have more coming. Being the completely right-brained individual that I am, I have zero math skills, coupled with the fact that I love colors and variety, I went a bit overboard picking chickens and didn't add up the fruits of my ordering frenzy until after the fact. I have 10 more coming on Wednesday that I ordered through Farm & Fleet (Cackle Hatchery), 9 more from Ideal Hatchery in May (don't judge me, I had to get those, they lay the chocolate colored eggs and I don't have any of those). I also am on a waiting list for a few others..only five..but they may not come through. So do the math if you want, but it is a bunch of chickens to add to the 25 that I already have.
My next post will probably be about how we spent the day on Sunday preparing my new "chicken village". 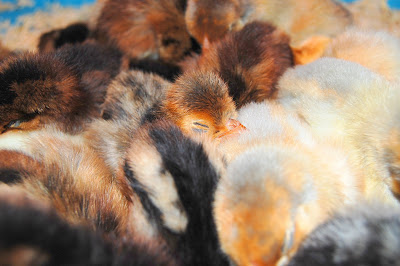 "Boy, this being a baby gig is exhausting"! 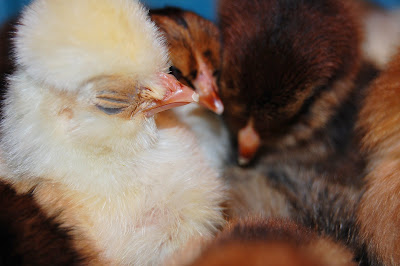 "You think you're tired"! 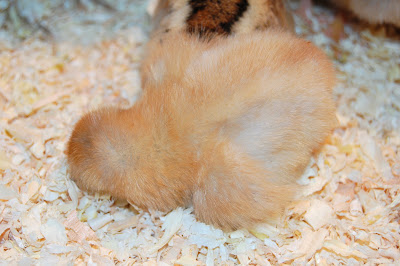