I know that I posted this picture earlier, when we were moving the chicken barns, but I wanted to point out my big barn in the background, with the green doors. It is a nice steel building, although I have always hated the green doors, it is very sturdy and large and one of the newer (relatively speaking) barns on the property. 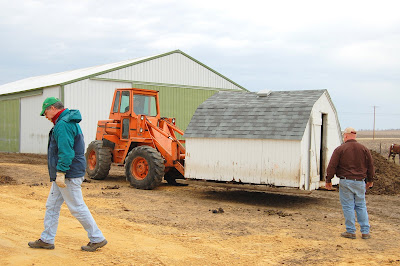 Well, it got a little windy on Thursday.

The winds were howling most of the morning, and continued to intensify as the day wore on. Rain was coming down in buckets, dumping 2 inches of rain with more to come.

I heard an unfamiliar sound while I was doing dishes, so I looked out the window to see the barn doors starting to bow in the wind. By the time I ran out to see if I could somehow secure them, they were already loose from their tracks and starting to let go, I tried to see if there was some way that I could save them, but I was no match for the heavy doors and the strong winds that were pulling them in and out. The horses were right near this barn so all I could do was run the horses into their barn to get them out of harms way and stay there, trying to keep them calm while listening to the sound of cracking and tearing wood and steel.

On the ground, in the right bottom corner of this picture, is one of the massive steel doors that are (were) on the east side of the barn. The other is flapping happily in the "breeze". 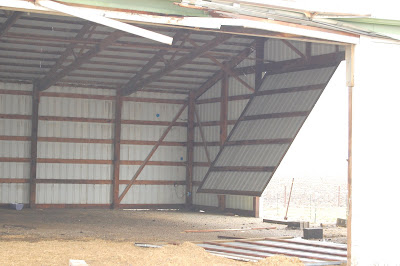 On the south side (where I am standing to take this picture) the doors started ripping off and then decided to do a little flip and come to a rest on the roof. Doors have no place on a roof! 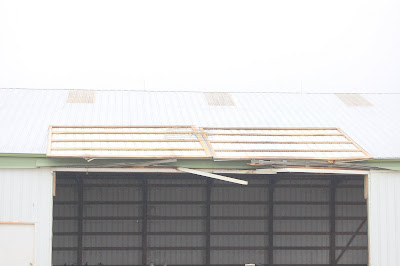 Unfortunately this is the barn that all the big chickens were hanging out in until their own barn is renovated, so after it got dark and the chickens were roosting in the dry part of the barn, I had to go and do some chicken wrangling, catching them all up while they were sleepy and moving them to another barn.....one that had some doors.

Although things got pretty scary for a while, once things calmed down we were able to get a better look at the damage, and it looks as though we may be able to salvage the doors ( the green must go though), we will need to replace some bracing and obviously the tracks and rollers are no longer useful.....also there is a little matter of removing them from the roof.

I'm just sayin' it was windy.

We lived in Kansas, Corrine, before moving to Flagstaff. I do know what you're talking about! Many's a time when dinner was left on the table as we high-tailed it to the basement of our Army quarters for a little "wind" to pass by.
We talk about moving back to the midwest...and I remind my DH that's fine for me but I'm worried he doesn't move as fast as he used to! LOL!!! Glad you're OK!

I enjoyed your good-humored take on an obviously stressful event!

I'm so glad that everyone's OK!

And ~ I'm thinking I may need some more chickens....

Oh heavens Corrine! Hey, next time you think the doors are going to go, open them! I know, it makes a mess of what's inside, but sometimes you can save the doors when you open them al the way up. My Rick made latches to slip into the door and pull them tight...once in a rare while we get winds 70 to 90 mph here when we get a Chinook...it's bad. So either they are all closed and latched tight or wide open so the wind blows through...at least we don't get cobweb buildup that way...hehehe...hope you get the overhead tracks fixed soon!

Good grief, that's some wind!
Hope you can fix it without it costing a fortune. Glad you're ok and the horses are safe.

Thanks for your concern everyone.
We have the insurance adjuster coming out next week. We got an estimate from a builder and were told that the doors would have to replaced and couldn't be repaired, we had a lot of shingles missing off of the house too..we'll see what the claims adjuster says, but at least the animals are safe!
Yes Nancy, of course you need more chickens!